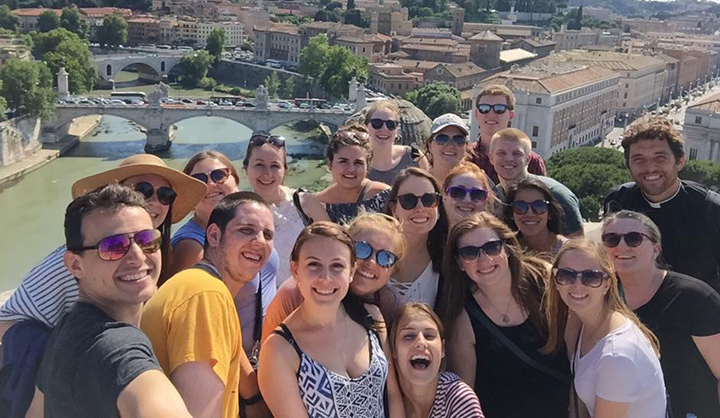 Some of the 37 students from Augustana College in Rock Island taking part in a recent trip to Rome as part of a religion class are pictured with Father Jeremy Freehill, Catholic Ministries Coordinator on campus, at Castel Sant’Angelo overlooking the Tiber River in the Eternal City. (Provided photo)

ROCK ISLAND — For Kaitlyn MacDonald, the opportunity to travel to Rome with nearly 40 other students at the end of her sophomore year at Augustana College here “may have been the greatest blessing God has given me thus far.”

“Growing up, my faith was always one of the biggest parts of my life,” said MacDonald, a member of St. Patrick Parish in Washington who is majoring in secondary education and history at Augustana.

“This trip, my faith was solidified as being my entire life,” she added, “Truly the most important part, which everything else fully centers around.” 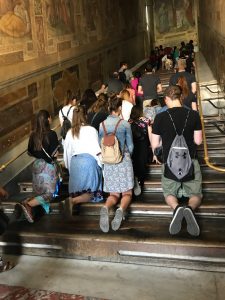 Catholic students taking part on the Rome trip climb the Scala Sancta (Holy Stairs) on their knees. The stairs, which tradition holds are the ones Jesus climbed to the praetorium of Pontius Pilate in Jerusalem, are near the Basilica of St. John Lateran. (Provided photo)

While the May 22 to June 3 visit to the Eternal City was more academic-based than spiritual — it caps religion classes taught by Dr. Dan Lee called “Faiths in Dialogue” or “Christian Ethics” — the opportunity to see holy sites such as St. Peter’s Basilica and experience an audience with Pope Francis bolstered the faith of MacDonald and other Catholics on the trip.

Adding to the spirituality of this year’s trip was the presence of Father Jeremy Freehill, chaplain of Alleman High School who just completed his first year as Catholic Ministries Coordinator at Augustana College. Father Freehill was able to offer daily Masses for Catholic participants as well as pray with them before the tombs of various saints, including St. John Paul II.

“The invitation to join this trip was very unexpected,” Father Freehill told The Catholic Post. “I was sitting one day in the Brew by the Slough coffeehouse on campus, and a man came up to me introducing himself as Dr. Lee. We spoke very briefly, and he mentioned the trip. I jokingly said, ‘If you need a priest chaplain I would be glad to go.’ Immediately, Dr. Lee said, “If you would like to go, we would love to have you.’”

TO EXPERIENCE WHAT WAS LEARNED

This was the seventh group that Dr. Lee has taken to Rome since 2006 to get a firsthand experience of what they had studied the previous semester. The 10-week class is enhanced for the study abroad portion with an extra emphasis on Roman history. More than 200 Augustana students have participated, most of them sophomores as well as some juniors and seniors. Parents are invited to join the students for the second week.

“While the course was not exclusively Catholic focused,” said Dr. Lee, “a substantial amount of the assigned readings, as well as the site visits while we were in Rome, were Catholic focused.” With Catholic being the largest denominational affiliation among students at Augustana, “it’s not surprising that there were a number of Catholic students involved in the program,” he added.

Among them was Anna Willems, a psychology major from New Windsor who just completed her junior year.

“It made me appreciate the values we have as Catholics even more than I already did,” said Willems, a member of St. Anthony Parish in Matherville who was also impressed with the city’s history.

“The fact that basically the entire city was built before Christ or around that time was really impressive,” said Willems, noting that Rome preserves its buildings “unlike how we build new things in the United States if they get old.”

The city is filled with “hidden treasures” ranging from remnants of palaces to old marketplaces, courtyards, and “amazing churches” around every turn, said student Emily Graziano. “It was as if we stepped into a movie scene,” she said.

For Catholic members of the group, the trip also was a step deeper in faith that often moved them to tears.

“I COULDN’T HELP BUT CRY”

“The second I stepped into St. Peter’s Basilica in Vatican City, my breath was stolen by the most magnificent thing I had ever seen,” said Graziano, of Arlington Heights. She was particularly moved by the area below the basilica where many past popes are buried and the tomb of St. Peter is located. 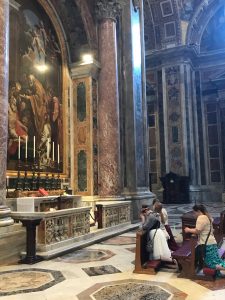 Students pray at the tomb of St. John Paul II at St. Peter’s Basilica. “Going on this trip, I did not anticipate the unbelievable impact it would have on my faith,” said Kaitlyn MacDonald, a member of St. Patrick Parish in Washington. (Provided photo)

“Seeing the tomb of St. Peter was as if everything I had ever believed in was solidified in one moment,” said Graziano. “As I continued to think about how real everything seemed now, I kept walking around the church and I began to cry. With each step I took, I felt more firmly grounded in something I already had grown to love.”

MacDonald shed tears as well when she got in line to receive the Eucharist during Sunday Mass at St. Peter’s Basilica.

“I was so overwhelmed by the beauty of the place in which I was celebrating Mass and my love for God that I simply couldn’t help but cry,” she said.

MacDonald was also among a group of students who, on their knees, climbed the Scala Sancta, a set of 28 marble steps honoring the passion of Christ.  She called the experience and the prayer in the chapel that followed “a religious experience more powerful and overwhelming than I have ever experienced before.”

Father Freehill’s memories center on Masses he offered in various basilicas and churches, including St. Mary Major, St. John Lateran, and of course St. Peter’s.  At the Dominican Church of St. Mary over Minerva, he specially prayed for Alleman High School, St. Mary Parish in Rock Island, and the Rock Island Vicariate all impacted by the 19th century missionary efforts of Dominican Father John George Alleman.

On the fourth anniversary of his first Mass and on the feast of St. Philip Neri, Father Freehill concelebrated a Mass with Cardinal Robert Sarah of Ghana, head of the Congregation of Divine Worship at the Vatican, at the Church of St. Philip Neri where the saint is buried.

For Augustana student Amanda Whalen of Niles, the most meaningful Mass was one Father Freehill offered on the St. Michael’s altar of St. Peter’s Basilica. It took place on the second anniversary of the death of her father, also named Michael.

“It was by far my most special memory from the trip and one that I will keep close to my heart forever,” said Whalen, who also had the opportunity to be within about 10 feet of Pope Francis when he drove by for his general audience.

Father Freehill called traveling with the students as part of their class “a unique way to come to Rome as a pilgrim.” He will remember the laughter, the shared meals, and card games on the rooftop of their hotel as well as the spiritual experiences.

He called the opportunity “a tremendous gift from God through Dr. Lee and the college.”

“It will be great this fall to return to campus with a number of new, familiar faces on campus and in the pews at our Sunday Mass offered there in Ascension Chapel,” said Father Freehill.