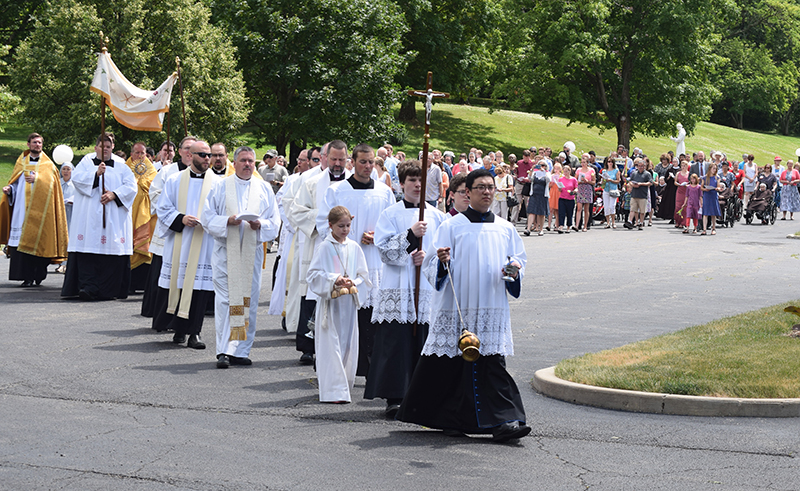 Hundreds of Catholics in the Diocese of Peoria joined in public demonstrations of their love for Jesus in the Eucharist during several Corpus Christi processions hosted by parishes and institutions on June 18, the Solemnity of the Most Holy Body and Blood of Christ. 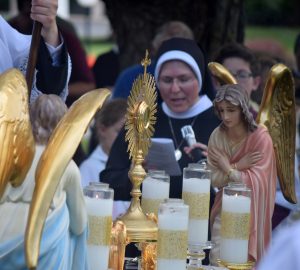 Sister Marion Hudackova, FSJB, gives the Scripture reading at the first altar at the Franciscan motherhouse. (The Catholic Post/Tom Dermody)

This year, Bishop Daniel R. Jenky, CSC, gave enhanced significance to the annual procession hosted by The Sisters of the Third Order of St. Francis at their East Peoria motherhouse. The procession ended with special prayers for vocations to the priesthood and consecrated life in the motherhouse chapel.

“What more meaningful way to celebrate Father’s Day than to honor the best Father of all, God our Father, and to do that by lifting up his Son in praise and adoration,” said Sister Judith Ann Duvall, OSF, major superior of the The Sisters of the Third Order of St. Francis, in welcoming remarks to the nearly 150 participants. The Blessed Sacrament was then carried from the motherhouse chapel for adoration at a series of outdoor altars set up on the grounds. Priests carrying the monstrance beneath a canopy included Father Alex Millar, Father Patrick Henehan, Father James Pankiewicz and Msgr. Rick Oberch. 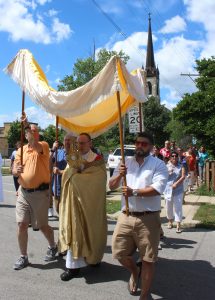 After a morning of being nourished by the Word of God and the body and blood of Christ, members of St. Mary Parish in Bloomington returned to take Jesus into their community for a Corpus Christi procession on Sunday, June 18. .

More than 100 people followed the Blessed Sacrament, displayed in a monstrance, to the homes of parishioners Jair and Angelica Patiño, Teresita Almanza, and Julian and Maria Lopez, who had set up altars on their front lawns. At each location, the pilgrims recited portions of the Litany of the Holy Eucharist from the diary of St. Faustina, and sang a song, aided by parish musicians. One was in English and one was in Latin, with the final song sung in Spanish.

Each visit ended with Benediction.

As they walked through the neighborhoods surrounding St. Mary Church, the pilgrims prayed the rosary in English and Spanish.

He told The Catholic Post it was the first Corpus Christi procession at St. Mary in several years and parishioners said they enjoyed it.

“I don’t think I could have asked for it to go any better,” Father Baker said.

Elsewhere in the diocese: