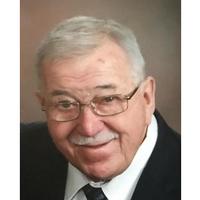 GERMANTOWN HILLS –A funeral Mass will be celebrated at St. Mary of Lourdes Church here at 11 a.m. on Thursday, June 29, for Deacon Dale H. “Jack” Gaetz, who last month marked 25 years as a permanent deacon of the Diocese of Peoria.

Deacon Gaetz, who served at St. Mary of Lourdes Parish and held diaconate leadership positions in the diocese as well as nationally, died on Sunday, June 25, 2017, at the OSF Richard L. Owens Hospice Home in Peoria. He was 84.

Msgr. Charles Beebe will be principal celebrant of the funeral Mass. Burial will follow in St. Mary of Lourdes Cemetery in Germantown Hills with military rites accorded by American Legion Post 89.

Recitation of the rosary is scheduled to begin at 3:30 p.m. on Wednesday at St. Mary of Lourdes Church with visitation to follow from 4 to 7 p.m.  Additional visitation will take place from 9 a.m. until 10:15 a.m. on Thursday at Mason Funeral Home Germantown Hills Chapel.

Born March 10, 1933, in Worth Township to Wilbur A. and Hildagard E. (Schmitt) Gaetz, he served in the U.S. Army from 1952 to 1955 and worked for the local utility company, CILCO (now Ameren), for nearly 45 years, retiring in 1997. He is a former mayor of Germantown Hills and served on the zoning board of appeals.

He married Doyne Dorothy Jones on June 11, 1955, at St. Mary of Lourdes Church in Germantown Hills and earlier this month the couple marked their 63rd wedding anniversary. They went through the formation program for the Diocese of Peoria’s fifth class of permanent deacons, and Deacon Gaetz was ordained with his class on May 9, 1992.

“I have found the diaconate to be a transforming experience,” he told The Catholic Post as his 25th anniversary of ordination approached this spring. “”Jesus comes to us in many faces, some we see and many we miss. The diaconate calls us to service of others by seeing, leading with compassion, love, joy and hope.”

Deacon Gaetz’s 25 years of ministry included a wide variety of service.  At the parish, he was a member of the finance committee and brought the Eucharist to the homebound as well as those at OSF Saint Francis Medical Center in Peoria.  He was active in Cursillo and for nine years was engaged in prison ministry.

On the diocesan level, he was assistant administrator to the permanent diaconate following ordination and then co-administrator from 1995 until his retirement in 2007. Nationally, he served on the executive board of the National Association of Deacon Directors.

In addition to his wife, Deacon Gaetz is survived by children Michael Gaetz of Germantown Hills, Rebecca (Chip) Collins of East Peoria, and Colleen VonBehren of Metamora; 12 grandchildren; 21 great-grandchildren; a sister, Frieda (Martin) Grebner of Metamora; and two nephews.

He was preceded in death by his parents and an infant son, John Gaetz.