Sadness in Princeton with announcement that St. Louis School will close July 31 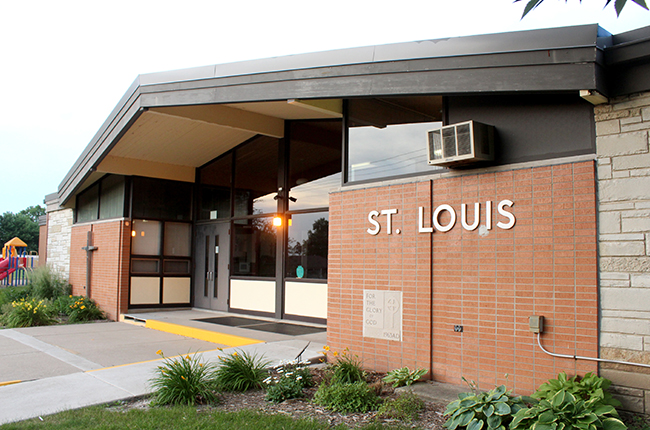 St. Louis School in Princeton opened in 1964 and was first served by the Sisters of Mary of the Presentation. Only about 40 students were anticipated for next school year in kindergarten through eighth grade. (The Catholic Post/Jennifer Willems)

PRINCETON — Due to declining enrollment and a shrinking pool of school-age children in the area, St. Louis School will close July 31. Father Jeffrey Stirniman, pastor, made the announcement at meetings with the teachers and staff, and then the school parents on June 12.

Saying this is one of the most difficult things a pastor does, Father Stirniman told the parents Monday evening that the decision was not made lightly.

“It was very, very thorough,” he said. “We turned over every stone we could possibly come up with.” 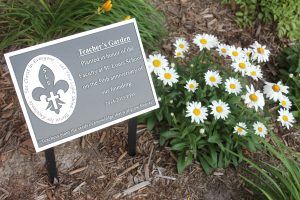 Daisies bloom in the “Teacher’s Garden” at St. Louis School in Princeton. The plaque acknowledges that “teachers plant the seeds of knowledge that will grow forever.” (The Catholic Post/Jennifer Willems)

Strategic planning had indicated that enrollment would continue to decline steadily, as it has for the public schools in Princeton, Peru and Bureau Valley. The rate of acceleration happened in a way no one could foresee, however, Father Stirniman said.

That number included everyone they thought would enroll through the summer. At the suggestion of the Office of Catholic Schools, registration was held early and resulted in only 27 students actually signing up.

Father Stirniman said the “red flags” for him included zero enrollment in kindergarten and the loss of four of the seven incoming first-graders for next year.

“Parents are leaving for a variety of reasons,” he said, noting that some are leaving Illinois to find better jobs, since there is little business or industry to attract working families to Princeton.

Others are concerned about the need to have more than one grade in a classroom or classes with only one, two or three students, he added.

Some potential and existing families, perhaps anticipating the school’s demise, have enrolled their children in neighboring Catholic schools. Not only does this demonstrate that there are “viable options” available, but it prompted Father Stirniman to consider what was best in terms of stewardship.

“By our closing and doing everything we can at St. Louis to segue these parents — Catholic and non-Catholic alike and from other parishes — we are promoting Catholic school education at other places to make them even more viable.”

At the meeting, he and Koehler provided a list of six Catholic schools within about 25 miles of Princeton that would be able to welcome the students from St. Louis School. They include: Peru Catholic School in Peru, Trinity Catholic Academy in LaSalle, Holy Family School in Oglesby, Holy Cross School in Mendota, Visitation Catholic School in Kewanee, and St. Malachy School in Geneseo.

To help with the transition to another school, which he admitted is coming later than he would have liked, Father Stirniman said St. Louis would provide free tuition for one full school year for current students to attend any diocesan elementary school. Through an arrangement made with the Diocese of Peoria, these schools will accept the St. Louis School tuition rate and parents will not be responsible for any additional tuition payments for the 2017-18 school year.

Students who are not Catholic will receive a voucher for $2,790 if they wish to attend another Catholic school in the Diocese of Peoria.

Tuition and fees paid to St. Louis were returned at the June 12 meeting.

The teachers and staff were not forgotten. Father Stirniman has offered to pay them for three more months. Koehler is assisting them in finding new jobs in diocesan schools.

During the parent meeting, which at times was filled with strong emotions and expressions of grief, anger and concern, Father Stirniman said, “We did everything we could. . . . This is the last thing in the world that I and the bishop and everybody else wanted to do.”

Weiss echoed that in a statement she made June 12.

“Any superintendent hopes that they never have to close a school; I am certainly no exception in this regard,” she said. “It is my sincere hope and my fervent prayer that each student who was enrolled at St. Louis School for the 2017-2018 school year will continue their Catholic education at a neighboring Catholic school.

“To all of the school families, teachers, staff members, alumni, past and present school pastors and principals, and on behalf of our bishop, I express my sincere gratitude for the good work that was begun at St. Louis School and pray will continue to bear much fruit in the days and years ahead,” Weiss said. “Thank you.”

While schools in the Danville and Ottawa areas have been reconfigured in recent years to form academies of students in pre-kindergarten through high school, the last Catholic school to close in the Diocese of Peoria was St. Mary School in Westville. There were 84 students in pre-kindergarten through eighth grade during the final 2009-2010 school year.