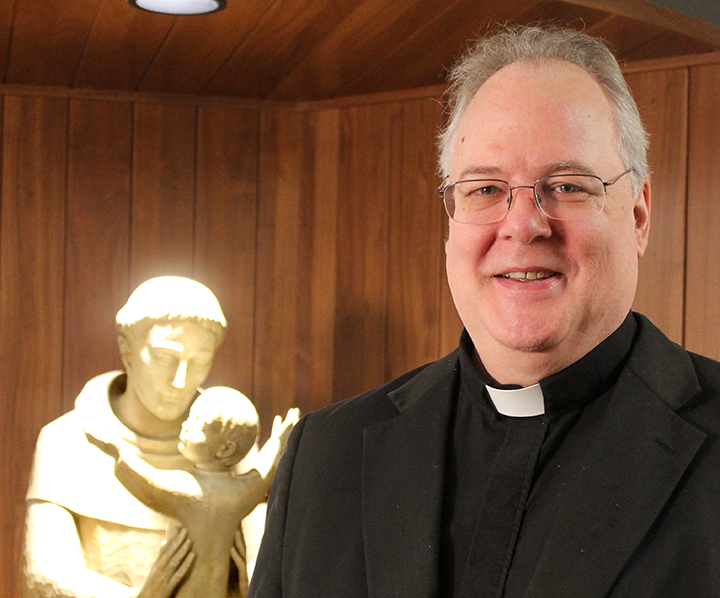 Msgr. Michael Bliss doesn’t remember the name of the staff chaplain who comforted him when his father died more than 30 years ago, but he can still see the man’s face and remember the words he heard as he grieved.

That calming, prayerful presence in good times and in bad is the legacy he hopes he is leaving at OSF HealthCare Saint Francis Medical Center in Peoria after 21 years of pastoral ministry there. Msgr. Bliss moved to St. Edward Parish in Chillicothe last week to begin his new life as pastor of that faith community and discover new opportunities to be available to the people in his care.

He will be succeeded as director of pastoral care at OSF HealthCare Saint Francis by Deacon Joe Knapp. (See story below.)

“I hope to be a pastor that’s available to people and to listen to them,” he said June 8 as he was preparing to leave OSF HealthCare Saint Francis. “I hope to help them grow in their love of God and walk that path of perfect love of God and neighbor.”

“I guess I see pastoral caregivers like Christ in the great storm of crisis, of uncertainty, of fear and doubt, and just being present to them, standing with them — representing Christ and being a source of stability and reassurance in the midst of a lot of things that are chaotic.” — Msgr. Michael Bliss

A product of Catholic education, Msgr. Bliss said he was looking forward to exploring ways to increase enrollment at St. Edward School. He knows he’ll have plenty of help from the community, which rallied to raise enough money to save the school last year when it looked like substantial repairs would force it to close.

Early in his priesthood the idea of being a pastor was a daunting one. He feels more confident now, after the education and experience he has gained at OSF HealthCare Saint Francis, especially in the leadership development programs.

Some of the “nuts and bolts” in his toolbox include best practices of good managers, dealing with money, using it responsibly, and working with budgets.

“There are people at the parish who want me to be successful and they’ll support me,” Msgr. Bliss added. “They have expertise in certain areas that I don’t have. So we’re all in this together.”

Born in Florrisant, Missouri, Father Bliss is the son of the late Mary and Clinton Bliss, a journalist who moved his family from the St. Louis area to Wheaton after getting a job at the Chicago Tribune.

Msgr. Bliss earned a degree in political science at Christendom College in Front Royal, Virginia, before studying for the priesthood at Holy Apostles Seminary in Cromwell, Connecticut. His friends were interested in the Diocese of Peoria and after visiting, he decided to apply to be a seminarian.

His first assignment after ordination on May 25, 1991, was as parochial vicar at Sacred Heart in Moline. It was the visits he made to parishioners and others in need of care at a nearby hospital that sparked his interest in chaplaincy.

After two years at Sacred Heart, Msgr. Bliss was assigned to St. John’s Chapel at the University of Illinois. In 1996, he applied to be an assistant chaplain at OSF HealthCare Saint Francis and “the rest is history.”

He has been chaplain since 1998 and was director of pastoral care. He was named a Chaplain to His Holiness with the title of “monsignor” in 2007.

Msgr. Bliss said God gives everyone certain gifts and talents and his seems to be the ability to work with people in the throes of difficult situations, often in a crisis, and not panic. He has also appreciated being with people in times of celebration and healing.

He has tried to pattern himself on Christ, who calmed the storm that frightened his disciples.

“I guess I see pastoral caregivers like Christ in the great storm of crisis, of uncertainty, of fear and doubt, and just being present to them, standing with them — representing Christ and being a source of stability and reassurance in the midst of a lot of things that are chaotic,” he said.

While technology is making great strides in the field of medicine, the nature of Catholic health care requires human interaction and that can never be replaced, Msgr. Bliss said.

“If, by chance, they figure out a way that they can create a robot that’s a nurse, I don’t know that I want to be in that hospital,” he said. “I want one that talks to me, who prays with me, who laughs with me, who cries with me.”

Msgr. Bliss takes consolation in knowing that he won’t be far away from OSF HealthCare Saint Francis. He’ll be back to visit his parishioners and has offered to help with ministry development. 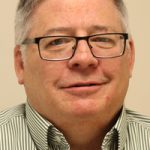 Succeeding Msgr. Michael Bliss as director of pastoral care at OSF HealthCare Saint Francis Medical Center in Peoria is Deacon Joe Knapp, who has served there for four years. He was one of 24 men ordained to the permanent diaconate on May 20.

Deacon Knapp worked at Catholic Charities of the Diocese of Peoria for 15 years. His experience in hospital chaplaincy includes ministry as director of pastoral care and volunteer services at Proctor Hospital in Peoria.

He will oversee a staff of 15 at OSF HealthCare Saint Francis. Three of them are priests: Father Dennis Spohrer, Father Edward Kopec, and Father Jeffery Small.

“He’ll do really well and I think everyone will like him,” Msgr. Bliss said of Deacon Knapp.