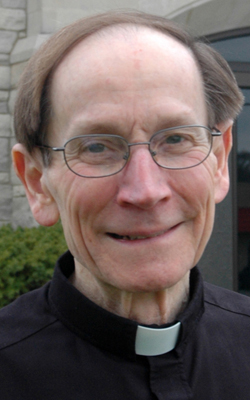 EDITOR’S NOTE: This story was included in the Jubilarian 2017 special section of The Catholic Post dated May 21, 2017. To view the entire section, use the e-edition tab at the top of this page and search for the issue.

SILVIS — Father Duane Jack said he felt the first stirrings of a vocation to the priesthood when he was in the seventh grade at St. Anne School in East Moline.

“At first I could not understand why God would want me to be a priest,” he recalled. “I felt so ‘un-likely.’ But I would soon learn that God forms us into what He wants us to be . . . and I am so grateful.”

Hundreds of men and women who have made Cursillo in the Diocese of Peoria also have reason to be grateful for his 50 years of priestly ministry. He was the driving force behind construction of the Believers Together Center at Christ the King in Moline, which has provided a home for Northwest Cursillo and Teens Encounter Christ since 2002.

The partnership between the parish, Cursillo and TEC is “a story of God’s grace,” Father Jack told The Catholic Post.

“It happened and it happened at the right time,” he said. “It was probably improbable at one point, but evidently the Lord wanted us to move in that direction and we did.”

Father Jack’s own story of grace began on Feb. 1, 1941. The son of Harris and Florence (Pierzchalski) Jack, he was born in Moline.

“At first I could not understand why God would want me to be a priest. I felt so ‘un-likely.’ But I would soon learn that God forms us into what He wants us to be . . . and I am so grateful.” — Father Duane Jack

He credits his parents, especially his mother, with supporting his call to the priesthood. “She prayed a daily rosary, so she started to pray that perhaps I would have a vocation,” Father Jack said.

He attended Alleman High School in Rock Island, graduating in 1959. He studied philosophy at St. Bede Junior College and earned a bachelor’s degree in philosophy and master’s degrees in theology at Immaculate Conception Seminary in Conception, Missouri.

Father Jack’s first assignments were as parochial vicar at Visitation, Kewanee; Immaculate Conception, Monmouth; and Holy Family, Peoria. He was named co-pastor at Sacred Heart, Moline, in 1976; and pastor of St. Maria Goretti, Coal Valley, in 1981; St. Mary, Kewanee, in 1991; and St. Patrick, Colona, in 2002.

Father Jack was granted senior status in 2013. At that time he thought the pace would slow a bit, but said he has remained busy by offering a weekly Mass at St. Mary Monastery in Rock Island and helping out as needed at area parishes.

The longtime spiritual director for Northwest Cursillo is working with permanent deacons in the area to take leadership of that eventually. No one, including Father Jack, is ready for that just yet.

“There have been 250 weekends in this area alone, and I’ve been part of every one of them,” he told The Post. “It was sort of my baby, so to speak. But we got plenty of good help once we started.”

Father Jack made his own Cursillo at the invitation of a friend and was sold. He cited the prayer support and personal witness talks — two-thirds of them given by the laity — and said he appreciates the way Cursillo gets people involved in their parishes and communities so they can make a difference.

That sense of community in Cursillo and parish life is a source of great joy for him.

“As a parish priest I feel like I share life or people share life with me beyond parish things,” he said. “I’m aware of when they have people sick in the hospital or when there’s a divorce in the family or a wedding’s coming up. I’m able to share that. It’s part of my life, too.”

The added value is that priests are able to provide a spiritual dimension to people’s lives, according to Father Jack, who added, “Priesthood is bringing that presence of the divine into everyday situations.”

Father Jack will celebrate his life among the people he has served with a Mass of Thanksgiving at 11:30 a.m. on Sunday, June 4, at Christ the King Church in Moline. An open house will follow — where else? — at the Believers Together Center from 1:30 to 4:30 p.m.