The Rosminian presence in the Diocese of Peoria, a constant since the diocese’s founding in 1877 and a major part of Catholic history in Galesburg, is coming to an end.

Citing declining numbers since the 1990s and with only two Rosminian priests — Father William Miller and Father Paul Stiene — in active ministry here, the religious community also known as the Institute of Charity has decided “the time has come to conclude our mission in Peoria.” 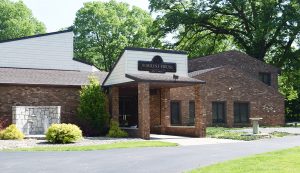 The present Rosmini House at 2327 W. Heading Avenue in West Peoria was built in 1984. It is hoped that the property will be sold to another Catholic entity. (The Catholic Post/Tom Dermody)

Father Stiene, pastor of St. Patrick Parish in Elmwood and St. Matthew Parish in Farmington, will take up ministry in the Diocese of St. Petersburg in Florida, where the Rosminians are consolidating their presence in the United States. The Elmwood and Farmington parishes will now be served by diocesan priests after June 14.

Father Miller has begun the process of becoming a priest of the Diocese of Peoria and will remain in Galesburg as pastor of Corpus Christi and St. Patrick parishes, as well as Sacred Heart in Abingdon.

“The Rosminians have wonderful memories of the Diocese of Peoria and the many parishes in which they served,” said Father Joseph O’Reilly, IC, provincial of the order’s Gentili Province, which encompasses the English-speaking countries of England, Ireland, the United States, and New Zealand. “We leave with gratitude in our hearts for the Grace of God and for the friendship of so many tremendous priest-friends and parishioners.”

Bishop Daniel R. Jenky, CSC, said the Rosminians “have left an indelible mark on our diocese,” having served here since its establishment, beginning with the legendary pioneer priest Father Joseph Costa, IC. Father Costa was the first priest of the order, founded in northern Italy in 1828, to arrive in the United States. During nearly four decades in Galesburg, he would establish Corpus Christi Parish and Catholic education in the region. Costa Catholic Academy bears his name.

Father Costa and the Rosminian priests and brothers who followed “have been of great assistance to our diocese, especially in the Galesburg area,” said Bishop Jenky in a May 15 statement. “It’s hard to imagine the Diocese without the Rosmini fathers’ service. They have helped countless people grow in the faith especially by offering spiritual direction, retreats, parish care, and guidance to our priests.

“It’s with great sadness that we bid them farewell,” continued Bishop Jenky. “May God continue to bless their community.”

FATHER COSTA WAS THE FIRST

Founded as the Institute of Charity by Blessed Antonio Rosmini to strive for the perfection and salvation of its members, the Rosminians do not have distinguishing religious garb. They wear the clerical dress of the priests in the dioceses in which they serve and put themselves at the service of the local church. 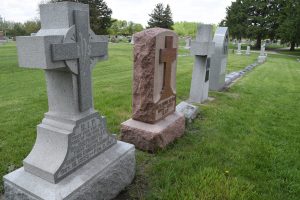 More than 25 Rosminian priests and brothers, including pioneer priest Father Joseph Costa (whose grave marker is at left) are buried in St. Joseph Cemetery in Galesburg. (The Catholic Post/Tom Dermody)

In the Diocese of Peoria, that service began in Galesburg with Father Costa, an Italian-born priest who had arrived in the United States in 1864, eventually making his way to central Illinois including service in Bloomington , El Paso, and Lincoln. When the Diocese of Peoria was established in the mid-1870s, founding Bishop John Lancaster Spalding entrusted the Catholics of Galesburg to Father Costa, who became pastor of St. Patrick Parish.

Father Costa founded St. Joseph’s Academy in 1879, established Corpus Christi Parish in 1885, and the Corpus Christi Lyceum high school a decade later. After the establishment of the high school, more Rosminian priests and brothers — many from Ireland — were assigned to staff it and, eventually, came to staff parishes in several communities of the diocese. In addition to Galesburg, Abingdon, Elmwood, and Farmington, Rosminian priests have also served in Matherville, Viola, Rutland, Flanagan, Peoria, and Seymour, where they once maintained a novitiate.

In the 1960s, the Rosminians established a base on Heading Avenue in West Peoria, purchasing a building the Sisters of the Third Order of St. Francis had used as a novitiate before the Franciscans moved to their new motherhouse in East Peoria. The present Rosmini House was built on that site in 1984 under the leadership of Father Francis Oman, IC, who died this February after serving in the diocese for nearly six decades.

Father Oman, like Father Costa and more than 25 other Rosminian priests and brothers, is buried in St. Joseph’s Cemetery in Galesburg.

Father Miller said that for Catholics who have lived their lives in Rosminian parishes their “whole experience of the Catholic Church has been through Rosminian pastors and assistants.”

“Many may think we’re an Irish order because the Irish are what they experienced,” said Father Miller. In addition to exposure to Rosminian spiritual hallmarks such as trust in God’s providence and service to the church, those in Rosminian parishes also had an international element to their faith experience and a link to the universal church as they were served by priests from Ireland, England, and Italy.

“We’ve only had a few American vocations who have persevered,” said Father Miller, and as a result the number of Rosminians in the diocese has always been relatively small.

Father Miller, an Ohio native who has served in the diocese since 1991 and who has held several leadership positions in the Rosminian community, said his decision to become a priest of the Diocese of Peoria is “not anything against the Rosminians, with whom as brothers I feel such an attachment.” But he has felt a growing sense of belonging in the diocese, and “a call to make this change in this point in life.”

Father Miller said the Rosmini House property in West Peoria has been underutilized in recent years. He expressed hope that it can be transferred eventually to “another Catholic entity, another mission.”