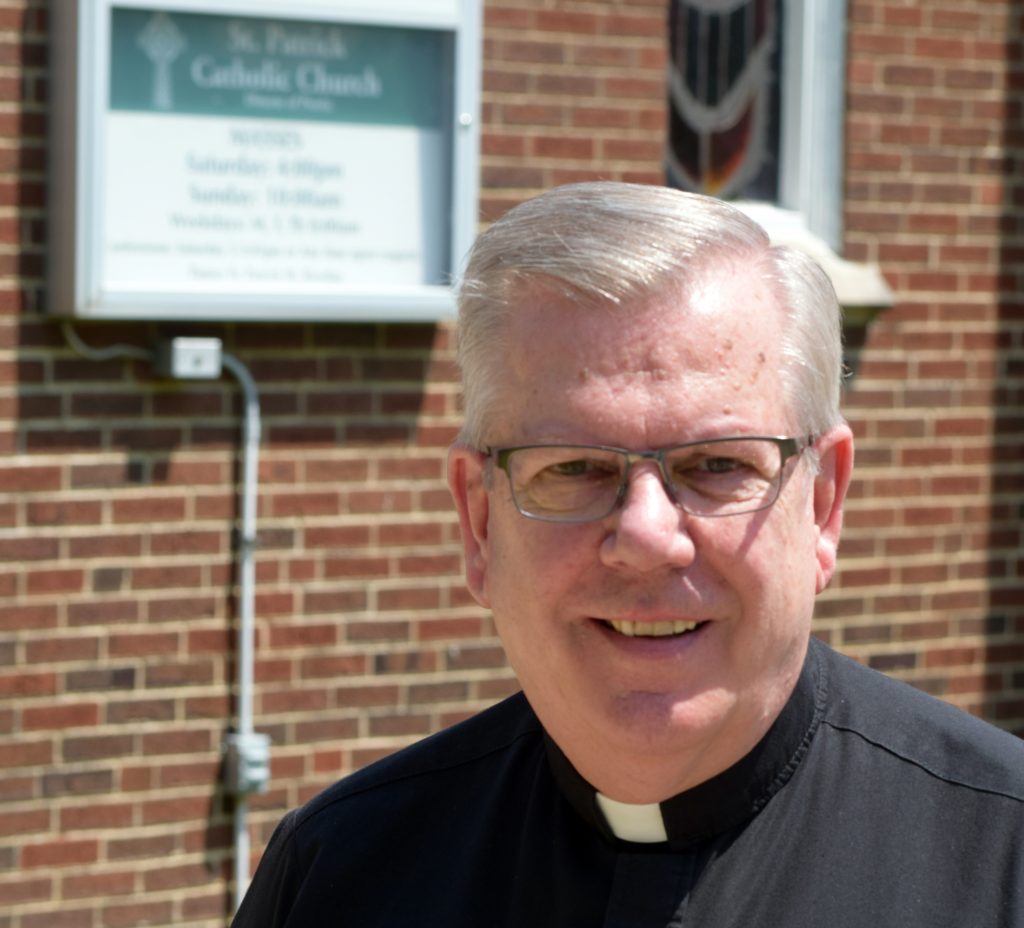 TOLONO — A casual retracing of Father Patrick Riordan’s career path would indicate he began as a teacher and then took a new road into seminary and the priesthood.

A conversation with the Streator native, who at age 70 is being granted senior status effective June 14, clarifies it was a case of paths merging.

“The teacher was still in me,” said Father Riordan last week from St. Patrick Rectory here as he recalled more than 26 years of priestly service spent in parishes from one side of the Diocese of Peoria to the other.

When serving faith communities with Catholic schools — such as Immaculate Conception in Monmouth or St. Mary in Kickapoo — Father Riordan would enjoy time spent with students in the classrooms. During his seven years as pastor in Kickapoo, he also celebrated two school Masses a week “so I got the chance to preach and teach the kids not only in the classroom but at the Masses.” 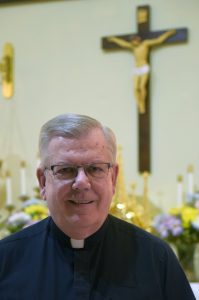 The Mass is “the center of my life,” says Father Riordan. (The Catholic Post/Tom Dermody)

Father Riordan has also taught CCD classes and adult education courses, but sees the role of pastor very much “like a teacher in the classroom” with frequent opportunities for learning in daily parish life. And, like in a classroom, a pastor’s duties sometimes call for gentle discipline or correction. He cited as one example the education required when a couple who is not practicing the faith requests baptism for their new baby.

“I want to bring them in and talk with them,” said Father Riordan, and like a teacher say “Let’s sit down and get this straight.”

In his final weeks as pastor of St. Patrick Parish in Tolono and St. Joseph Parish, Ivesdale — where he has served since 2013 — Father Riordan has just completed a series of homilies to lead parishioners to a deeper appreciation of the Mass.

“That is the center of my life,” Father Riordan said of the Mass, adding that offering Mass for the people “and drawing them into a deeper understanding of this great gift to us” has been a highlight of his various assignments.

The weekend of May 6-7, the World Day of Prayer for Vocations, Father Riordan also shared his own vocation story with parishioners in Tolono and Ivesdale.

That story began in Streator, where Father Riordan was the youngest of seven children born to J. Herbert and Elizabeth Riordan, members of Immaculate Conception Parish. After early education in public schools, he finished his grade school education at St. Mary School and “began to feel a real pull and interest” in the priesthood to the point of enrolling at St. Jude Seminary in Momence for high school, but “my vocation lasted two and a half weeks and I went home.”

During Lent of 1986 he began starting his day with 6:30 a.m. Mass in Streator. That summer, a seminarian assigned to the parish asked him over a cup of coffee “Have you ever considered a vocation to the priesthood?”

“I told him, ‘Yes, I have, but . . .’ and I went through the whole list of why I couldn’t do it,” said Father Riordan. He started knocking the reasons out from under me.”

By the following January, he was studying at Holy Apostles Seminary in Cromwell, Connecticut, and at age 43 was ordained on a “bitter cold and icy” day at St. Mary’s Cathedral in Peoria on Dec. 22, 1990.

Ordained with him was Father Vien Van Do, a native of Vietnam who became a close family friend when he served as a deacon in Streator. “My Mom really got to like him,” recalled Father Riordan, saying she beamed with pride on the day her “two sons” were ordained. Eleven years later, Father Van Do would preach at Mrs. Riordan’s funeral Mass.

SERVICE ACROSS THE DIOCESE

Father Riordan’s assignments began with three years as parochial vicar at Immaculate Conception, Monmouth; St. Andrew, Oquawka, and St. Patrick, Raritan. In 1993, he was named pastor of Sacre Coeur Parish in Creve Coeur and principal of the parish school.

The following year, he became pastor of St. Mary Parish in Westville and, in 1996, was assigned to Our Lady of Guadalupe Parish in Silvis. “From one corner of the diocese to another,” he recalled.

He took a leave of absence in 1999 when his mother was in failing health, and while in Streator assisted at St. Anthony Parish and had chaplain duties at St. Mary Hospital. For a brief time he was administrator of his home parish, Immaculate Conception.

“That was interesting,” said Father Riordan. “The people were very nice. Some of those I knew in high school were grandparents by then.”

After serving as pastor in Kickapoo from 2002 to 2009, he guided St. Mary Parish in Princeville for four years prior to his present assignment in Tolono and Ivesdale.

Father Riordan will reside in Galesburg following his retirement and has already offered to assist area pastors as he is able. He also plans to catch up on some reading and so some traveling. When asked by parishioners what else he plans to do, Father Riordan has joked “I’ve always wanted to be a greeter at Wal-Mart, so I’ve got my name in there.”