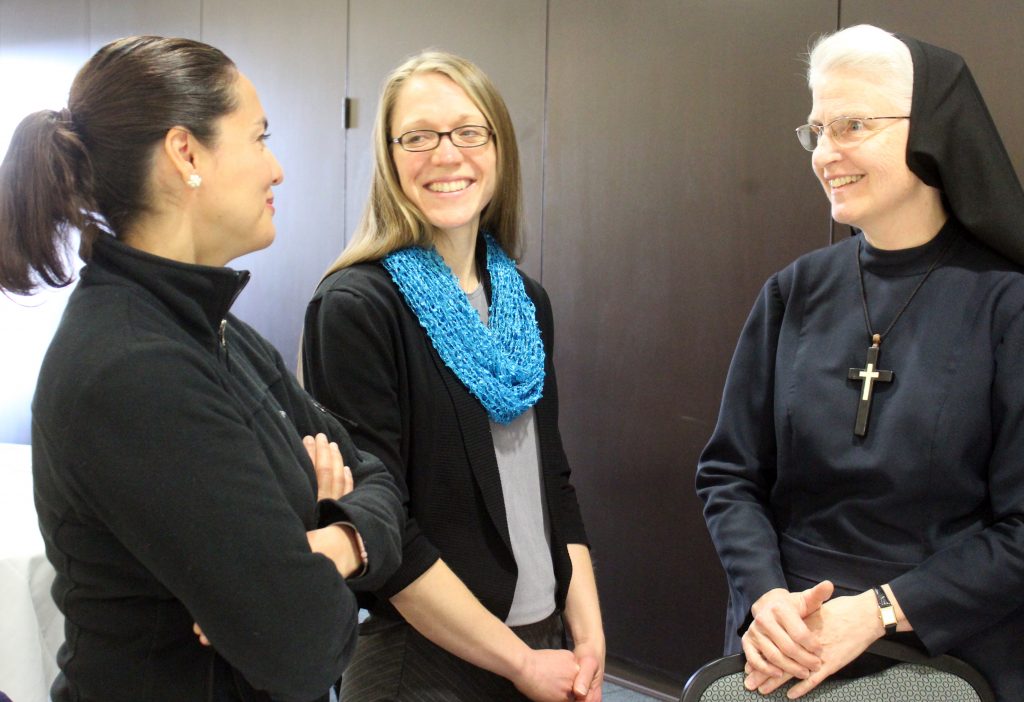 Animals and man were created on the same day, but that doesn’t mean people have to act on their animal instincts. Instead, they can choose to live in the seventh day of creation, which is relationship with God.

The choice was made clear by Sister Marie Paul Lockerd, RSM, one of the speakers for a Catholic Women’s Symposium sponsored by the Respect Life of the Diocese of Peoria and the Diocesan Health Care Committee. It drew about two dozen people to the Spalding Pastoral Center in Peoria for a day of reflection and spiritual enrichment.

The theme was “Protecting Our Procreative and Gynecological Health.”

In addition to Sister Marie Paul, a family practice physician and medical consultant for NaPro technology in the St. Louis area, speakers included Dr. Jillian Stalling and Dr. Elizabeth Cox of the OSF Women’s Health and Advanced Fertility practice at the Center for Health in Peoria.

The day also featured screenings of two documentaries and panel discussions. “Hush” explored what the medical community says about abortion and how it actually affects women and society. The other was about “NaPro: The Quiet Revolution.”

After a time of eucharistic adoration, participants had an opportunity to consecrate themselves to Mary and pray the Divine Mercy Chaplet.

WHAT WENT WRONG — AND RIGHT

Sister Marie Paul set the tone for the symposium by exploring the Theology of the Body, which was developed by St. John Paul II.

By creating man in his own image, God called us to live the total self-giving love that exists between the Father, the Son and the Holy Spirit. Adam and Eve enjoyed friendship with God in the Garden of Eden and had no need to fear anything or feel shame because they were in right relationship with God and creation.

That changed when Satan, in the guise of the serpent, separated Adam and Eve and started breaking down the family structure. He sows distrust of God into their relationship and the fear of not getting what they deserve, which leads to lies, blame, blindness to God, and ultimately hardness of heart, Sister Marie Paul said.

The reciprocal gift of self remains, but it’s all mixed up, she explained. The heart becomes a battleground between love and lust or the desire for pleasure in all things.

In her Magnificat, Mary models how to make things right. Sister Marie Paul called these the “Seven Steps of Grace.”

The angel Gabriel went to Mary to announce his good news while she was betrothed to Joseph, working within a family structure. He spoke the truth about God’s plans for her and she trusts and accepts what God is proposing — the reciprocal gift of self.

Instead of hiding, she goes out to visit her cousin Elizabeth, which is an act of charity. Instead of blaming, Mary praises God.

This is what we must do, too, Sister Marie Paul said.

“Christ is sent as the redeemer. Christ emptied himself, coming in the likeness of man,” she said. “Love is a gift of self and, of course, Jesus is the prime gift of self.”

As Jesus gives himself to us body, blood, soul and divinity in the Eucharist, he helps us to give ourselves and to know that it is in the gift of self that we will know who we are, Sister Marie Paul said.