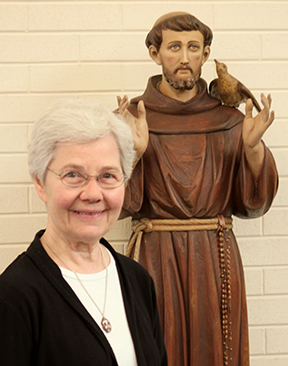 Sister Diane Vande Voorde, OSF, stands next to the statue of St. Francis of Assisi in the chapel of Immaculate Conception Convent in West Peoria. (The Catholic Post/Jennifer Willems)

Sister Diane Vande Voorde, OSF, smiles and becomes animated when she talks about the permanent diaconate and the 24 men who will be ordained to this ministry on Saturday, May 20, at St. Mary’s Cathedral in Peoria.

She has served as the associate director of the diocesan Office of the Permanent Diaconate since 1998, helping to oversee the formation of four classes of men. She has stayed so long for a simple reason.

“I love doing it,” she said, her face lighting up. “They’re just a tremendous asset to the diocese.”

Sister Diane has served as the associate director of the diocesan Office of the Permanent Diaconate since 1998.

But as the current class prepares for ordination, Sister Diane is preparing for a change of ministry. She is discerning with her religious community, the Sisters of St. Francis of the Immaculate Conception in West Peoria, about what that next step will be.

When she goes, she will take many things that can’t be packed in boxes. Among them are her memories of the permanent deacons and her admiration and respect for them.

“The deacon community is such a supportive and loving community, not only to the staff but to each other. They’re very close-knit,” she told The Catholic Post. “They’re committed to service and they’re generous.”

One of the things they are most generous with is their time, she said, noting that these faith-filled men want nothing more than to share their faith and serve the church.

“A lot of them work with TEC and Cursillo. That takes a lot of time,” Sister Diane said. “They have families and some of them are working full time, but they’re still spending time at Masses, visiting the sick, taking holy Communion, doing Communion services, teaching and helping with RCIA.”

They also offer pastoral care in prisons and hospitals, and oversee diocesan ministries like Catholic Cemeteries.

That desire to serve the Lord and the people of God is something Sister Diane shares with the permanent deacons.

Born in Annawan, Sister Diane got to know members of her community — affectionately called the Heading Avenue Franciscans — when they taught at Sacred Heart School.

After entering the Franciscan community, Sister Diane earned a degree in music from St. Ambrose College (now university) in Davenport, Iowa, and was certified to teach elementary and secondary school. She taught at Seton Catholic School in Moline and St. Joseph School in Pekin before going on to earn a degree in school psychology from the University of Illinois.

She worked in special education as a caseworker for 11 years, and then joined Msgr. Charles Beebe in the Office of the Permanent Diaconate. During the formation of the class that will be ordained on May 20, she has worked with Msgr. Timothy Nolan, who was named episcopal vicar for the permanent diaconate in 2012. They had worked together in Cursillo.

Sister Diane said she has enjoyed the teaching and spiritual direction involved in her work with the permanent deacon candidates, as well as helping them explore their strengths and talents. She looks forward to leading the applause for them as they are ordained and seeing how they will use those gifts in the years to come.