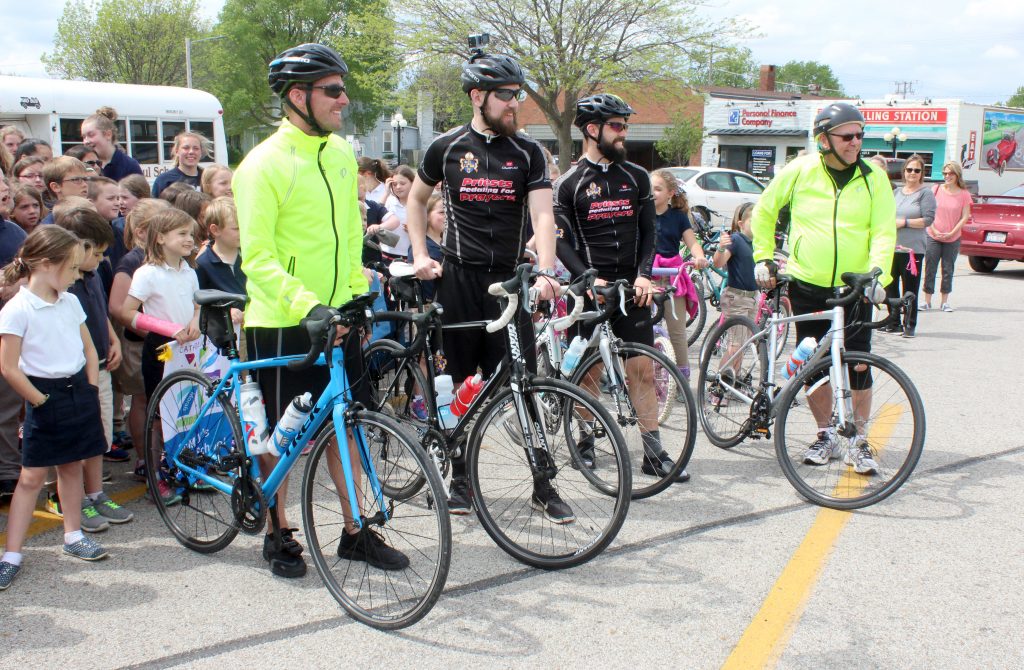 Father David Sabel, right, rode with the pedaling priests for 22 miles on their way into Pontiac. He poses with them prior to a parade in Pontiac with Catholic school students from St. Mary, Pontiac, and St. Paul, Odell. (The Catholic Post/Jennifer Willems)

PONTIAC — Students from St. Mary School in Pontiac and St. Paul School in Odell had an extra reason to cheer when the “Priests Pedaling for Prayers” rode into the parking lot of County Market here on April 26.

With Father Adam Cesarek, their parochial vicar, and his companions, Father Michael Pica and Father Tom Otto, was their pastor, Father David Sabel. He had met the younger priests 22 miles outside of town and biked in with them.

Then the students formed a parade, led by a police escort, to return to St. Mary School, walking or riding their bikes with the priests.

“I’ve actually done 30 miles as a warm-up to this. So I felt pretty confident, as long as the wind was not in my face,” Father Sabel told The Catholic Post after the school rally. He said he counted on the western wind at his back to give them a boost.

Other priests joining Fathers Cesarek, Otto and Pica for various parts of their 340-mile journey were Father Fredi Gomez Torres of St. Mary in Moline and St. Mary and St. Anne in East Moline and Father Scott Potthoff of St. Pius X in Rock Island, and Father Timothy Hepner, diocesan vocation director for recruitment, in Bloomington.

“Anything to promote vocations is a wonderful thing,” Father Sabel said of “Priests Pedaling for Prayers.” “I knew it would get the kids fired up and hopefully our families are getting fired up, because we need our families to promote that the priesthood is fun.”

He added that it was important for the children to see how joyful priests are.

“I think Jesus had fun with his 12 disciples . . . as he taught them and trained them,” Father Sabel said. “I think it does nothing but uplift the spirits of the kids here and hopefully it will get some the young kids to think about the priesthood.”