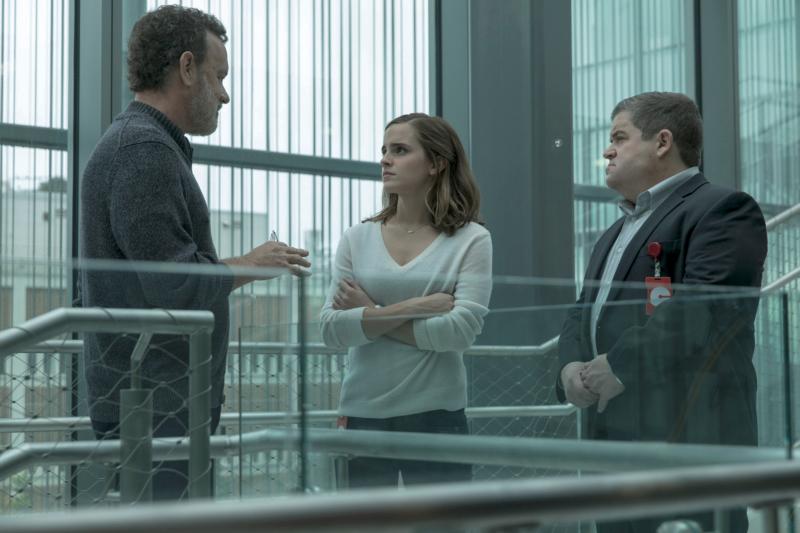 Tom Hanks, Emma Watson and Patton Oswalt star in a scene from the movie "The Circle." The Catholic News Service classification is A-III -- adults. (CNS/STX Films)

Confused cautionary tale about a young office worker (Emma Watson) who is thrilled when a friend (Karen Gillan) gets her a job at the world’s leading social media company (led by founders Tom Hanks and Patton Oswalt). But the corporate culture turns out to be unsettlingly cult-like and the outfit’s stated goal of enlisting every person on the planet as a member raises troubling issues about privacy and the power of big business. The protagonist’s initial enthusiasm is also dampened by her encounters with the now-marginalized, and disenchanted, third creator of the firm (John Boyega).

In adapting his co-writer Dave Eggers’ novel for the screen, director James Ponsoldt fails to insert much energy into the proceedings, and the film’s ultimate message remains unclear. While perfectly acceptable for a wide swath of grown-ups, a crucial scene probably puts this drama over the line for all but the most mature teens.

Brief semi-graphic marital lovemaking, some sexual humor, a few uses of profanity, at least one rough term, several crude and a couple of crass words. The Catholic News Service classification is A-III — adults. The Motion Picture Association of America rating is PG-13 — parents strongly cautioned. Some material may be inappropriate for children under 13.