Just a few minutes into his first look at a new exhibit on military chaplains at the Museums of the Diocese of Peoria, Msgr. John Prendergast was stopped by a familiar name and display.

“This is Frank Cahill’s,” said Msgr. Prendergast, eyeing a World War II-era military Mass kit set up on a makeshift altar in a corner of the exhibit at the Spalding Pastoral Center in Peoria.

“He was a great priest,” he added of Father Francis Cahill, who served as a U.S. Navy chaplain during World War II and later became Msgr. Prendergast’s mentor as pastor of Immaculate Conception Parish in Streator. “It meant so much to him, the years he served during the war. He always remembered it.” 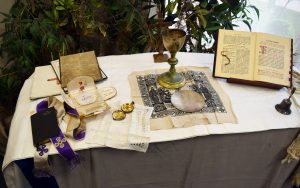 A field Mass kit that belonged to the late Father Francis Cahill, who served as a U.S. Navy chaplain during World War II, is displayed on a makeshift altar as part of the new exhibit honoring military priests of the Diocese of Peoria. (The Catholic Post/Tom Dermody)

Now, through the museum’s exhibit “Military Priests of the Diocese of Peoria,” the stories and sacrifices of Father Cahill, Msgr. Prendergast, and about 50 other priest chaplains — past and present — will be publicly remembered for the rest of 2017.

Opened in late March, the exhibit is already proving to be one of the museum’s most popular, said Sister Lea Stefancova, FSJB, diocesan archivist.

“There are really interesting stories,” she told The Catholic Post. They span from the diocese’s first military chaplain — Father Lucien Libert, who served in France during World War I — to “the youngest,” Father Jacob Valle, ordained in 2015 after seminary training co-sponsored by the Archdiocese of Military Services. Father Valle, a member of the U.S. Air Force Reserves, is parochial vicar of the LaSalle Catholic parishes.

The military chaplain exhibit is the latest to rotate into the museum’s space next to the permanent display on Archbishop Fulton J. Sheen. It draws in visitors with large photos of chaplains celebrating Masses with soldiers in the field, models of U.S. warships, and a mannequin sporting the dress uniform of the U.S. Army Air Corps.

But the impact of the new exhibit is most keenly felt in the plentiful excerpts of letters culled from the files of the former priest chaplains or from the pages of The Register, the predecessor of The Catholic Post, during the war years.

Father Cahill, for example, reports that for an altar “I’ve used a machinist’s bench, a mess table, a chart case, and then a bar,” recalling that while the bar made for a “good, solid altar,” an officer vowed to find a better location after he knelt on a beer cap. 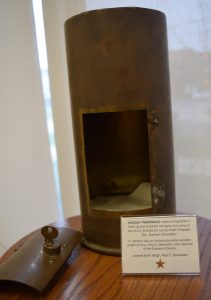 This tabernacle was made during World War II from a torpedo casing by the crew of the U.S.S. Munda for use by its chaplain, Father Norbert Showalter. (The Catholic Post/Tom Dermody)

A similar letter was penned by Father Paul Kinder, who served as a captain in the U.S. Army Chaplain Corps from 1944 to 1947 and earned a World War II Victory Medal, among other honors.

“We have offered Mass in a tent, in open air, on ships, in cathedrals,” he wrote in 1945. “The altar has been a jeep front, an overturned folding chair with board on top, cases of 20mm shells, a field desk, a liquor bar, or a marble altar.

“The humility of the stable-born Savior and the catholicity of His Church are keenly experienced in this Army life,” wrote Father Kinder, who would later serve for three decades as pastor of the former St. Patrick Parish in Danville. Another letter from Father Kinder, written from Bavaria shortly after World War II, acknowledges that “war is indeed hell.”

The museum exhibit’s subtitle reminds that “There is no greater love than to lay down one’s life for one’s friends.” Such ultimate sacrifice is recalled in the story of Franciscan Father Herman Felhoelter, a former assistant at St. Boniface Parish in Peoria who became a U.S. Army chaplain.

In 1950, during a particularly intense campaign in the Korean conflict, Father Herman volunteered to stay behind with the wounded.

“When the Communist soldiers arrived,” according to a framed account in the museum, “he was shot in the head while praying with a dying man. The next day would have been his 37th birthday.”

Among the museum’s major contributors was Msgr. Prendergast, who spent 22 years serving soldiers and their families as a highly decorated, paratrooping U.S. Army chaplain. In display cases are several of his medals and his military Mass kit. On the wall is a photo of him celebrating a field Mass in 1991 just before Operation Desert Storm in Iraq and Kuwait. 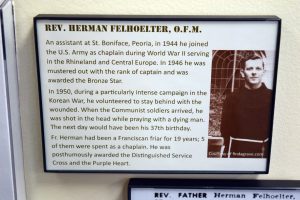 The story of Franciscan Father Herman Felhoelter, a U.S. Army chaplain killed during the Korean conflict, is one of many shared in the new exhibit.

“When you’re still alive and you’re in a museum, I don’t know if that’s good or bad,” he joked with Sister Lea and the other diocesan archivist, Sister Ann Gill, FSJB.

Other contributors to the exhibit included Msgr. Paul Showalter, diocesan vicar general, who gave large scrapbooks and other artifacts from his uncle, Father Norbert Showalter, who served as chaplain on the U.S.S. Munda in World War II.  The family collection of Eugene and Evelyn Voss provided other historic pieces.

There are helmets from the various wars, an entire wall of news stories, and even a four-octave, portable Estey Organ that folds into toolbox size for transport in time of battle. One just like it is seen in a historic photo of a field Mass.

“The soldiers have a chance to go to Mass and go to confession . . . so they are confident they are able to go ahead and go to combat,” said Msgr. Prendergast.

Following is a list of the military chaplains, living and deceased, honored at the new museum exhibit: