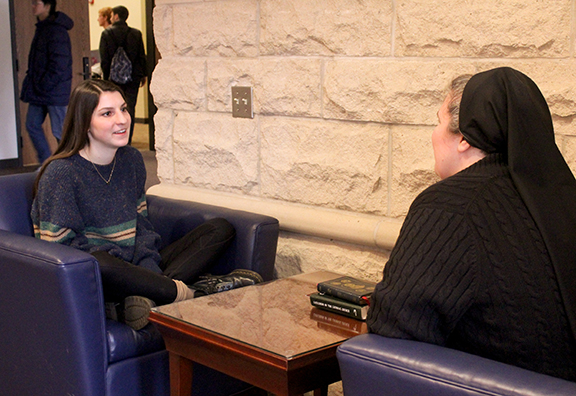 EDITOR’S NOTE: This story was part of “Vocations 2017,” a special section of the March 26 edition of The Catholic Post. To see the entire section, click on the Post’s “E-Edition” link.

CHAMPAIGN — God has a unique plan for each person’s life and 80 college students spent a recent Saturday considering what that might be as part of the Next Step Discernment Retreat sponsored by St. John’s Catholic Newman Center at the University of Illinois.

It was an “ecumenical” retreat — students from St. Joseph Catholic Newman Center at Bradley University in Peoria also attended. The response to the retreat was so great, in fact, that it had to be moved from St. Boniface in Seymour to St. Matthew in Champaign.

Saying the planners hoped to create a “culture of discernment,” Father Timothy Hepner asked the young adults to focus on where the Lord was leading them. 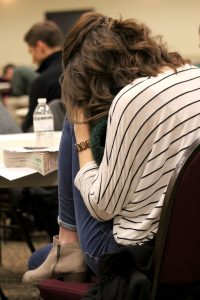 Meghan Grill, a junior at the University of Illinois, takes the opportunity to spend a few minutes in quiet prayer. She said the retreat brought her a sense of peace as she looks to her future. (The Catholic Post/Jennifer Willems)

“Maybe there are places of resistance. Invite the Holy Spirit into that. Or there may be certain graces or questions that are on your heart,” said Father Hepner, vocation director of recruitment for the Diocese of Peoria, who helped with the retreat. “Bring those before the Lord.”

Also guiding them were Father Chase Hilgenbrinck, assistant chaplain at St. John’s Catholic Newman Center, who shared how the Lord led him from playing soccer professionally to priestly ministry. Niki Viegut, a missionary with the Fellowship of Catholic University Students at St. John’s, and her husband Nick talked about their vocation to married life.

Offering a perspective on consecrated life was Sister M. Karolyn Nunes, vocation director for the Sisters of St. Francis of the Martyr St. George. In addition to taking part in the panel discussion, she talked to the students about the need to create a culture of holiness in their lives, because that is the springboard for any vocation.

Holiness is the work of the Lord, she said, but the pursuit of holiness has to be based on a decision to respond.

“If we look at vocation as a vehicle, it ceases to be a burden and frees our heart to be able to love the way our heart was designed to love,” Sister M. Karolyn explained. “We have to choose it every day. . . . The more we make that choice, even if it’s not a complete choice, the more your heart is going to be strengthened and conditioned to make the choice without thinking about it.”

She encouraged them to surrender the areas of their hearts that are the darkest and “live the questions,” saying the mystery of holiness is not something to be solved. “It’s going to look different for different people because each of us has been created differently.”

There is no holiness without prayer, she added.

Addressing major sin is necessary because without that, it’s going to be harder to love, according to Sister M. Karolyn, who also talked about “aesthetical practices” — choosing to give up something with the intention that you love Jesus more, for example.

“Holiness can be daunting, but don’t be afraid,” Sister M. Karolyn said. “Because God, who has created you, knows exactly how he wants to make you holy.”

The day also included a Eucharistic Holy Hour and Benediction, with an opportunity for the sacrament of reconciliation. Father Hepner echoed Sister M. Karolyn’s words as he prepared the students.

“Holiness is not a spectator sport — it demands participation. Ask the Lord to help you get to the point of letting go of anything that is not of him,” Father Hepner said.

The retreat brought peace to Meghan Grill, a junior at the University of Illinois.

“This is a call to discern what God wants you to do with your life. I’m just discovering what I want to do with my life,” she told The Catholic Post. “This is learning the necessary tools . . . to make sure that what I hear is from God and not from myself.”