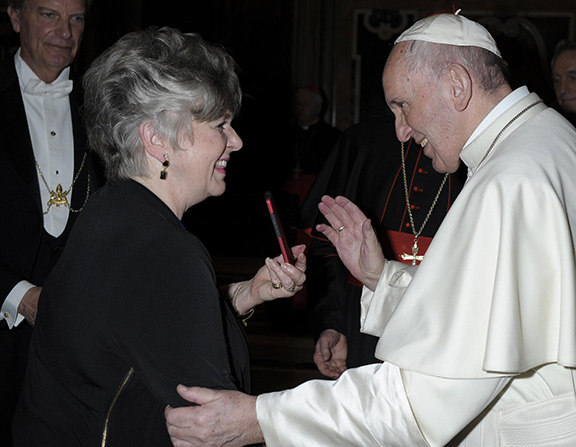 Music, not just any music, but sacred music, and how it has evolved these past 50 years since Vatican Council II was the topic of discussion at a recent conference called by the Vatican’s Pontifical Council for Culture and Catholic Education. My husband, John, and I were privileged to attend this international gathering of 350 music directors, priests, bishops and even a cardinal or two from 40 different countries.

When the invitation came, I knew I had to go. It had been 29 years since the last international meeting of music directors was called. I was there in 1988, a much younger woman, mom of seven, liturgical music director and music teacher at St. Philomena, representing our diocese at the request of Bishop Edward O’Rourke, so how could I not go back for this historic meeting March 2-4, 2017?

Currently serving as liturgical music director at St. Anthony in Bartonville, I approached my pastor, Father David Heinz, in fear and trepidation. Not only would I miss directing and singing the music of Ash Wednesday, but also, the First Sunday in Lent. I knew this event in our lives was to be bigger than I could ever have imagined when Father Dave totally embraced the idea and encouraged me to proceed with plans to go.

Sacred music of the Catholic Church had been an integral part of my upbringing in the beautiful “cathedral of the South Side,” St. Boniface in Peoria. My parents brought us to Mass as babies with all the sounds and smells of worship planted in our ears and souls. The Benedictine nuns and the Franciscan priests made sure we were well trained in the art of singing the chant with participation at daily Mass before school each day. 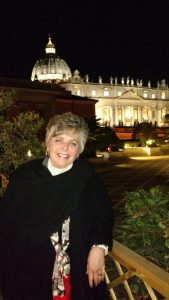 I was 21 in 1967 when the official teaching of the Second Vatican Council was released. “Musicam Sacram” radically changed the music of the Church that I had grown up with. It was an exciting time and a confusing time all at the same time. Many of us welcomed speaking and singing the Mass in the vernacular and the active participation of the faithful in the worship of Our Lord.

The pendulum had swung, and as so often happens with a pendulum, it takes a long time to swing to the middle where we can find truth. Fifty years after Vatican Council II, those assembled at the conference in Rome were asked to reflect on the current interest in sacred music; to evaluate the change in understanding the instruction of “Musicam Sacram”; to consider the languages most suited to sacred worship; to remember the role and place of church musicians; to recover our musical heritage in a balance with contemporary music and culture; and to promote the urgent need for strong formation in the different musical ministries.

St. Augustine is often quoted as having said that singing is twice praying. We were encouraged to cherish our heritage of all forms of sacred music and in particular, the Latin chant. We were challenged to bring a bit of the beauty of polyphony and chant back into our Mass on a regular basis and to teach our choirs and congregations.

If you are interested in increasing your knowledge and repertoire of sacred music, I would like to personally invite you to join the St. Anthony Camerata Chorale Ecumenical Festival Choir. The choir was formed in 2014 as the result of an invitation I had received to sing for the Papal Mass of Epiphany at St. Peter’s Basilica. After its successful tour, the Festival Choir has grown tremendously these past two years and is proud to be part of the St. Mary’s Cathedral Concert Series.

Our fall concert, “May the Angels Lead You,” will be held at St. Mary’s Cathedral in Peoria on Sunday, Nov. 5, at 4 p.m. The concert is dedicated to all our loved ones who have gone home to be with our Heavenly Father and features the Rutter “Requiem” and the Allegri “Miserere Mei” in the first half, with going-home Gospel hymns in the second half.

The choir meets at St. Anthony, 2525 N. Skyway Road, in Bartonville. No auditions are necessary, come and bring a friend to our open rehearsals on Wednesdays, from 6:30 to 9 p.m., April 26 through the end of June.