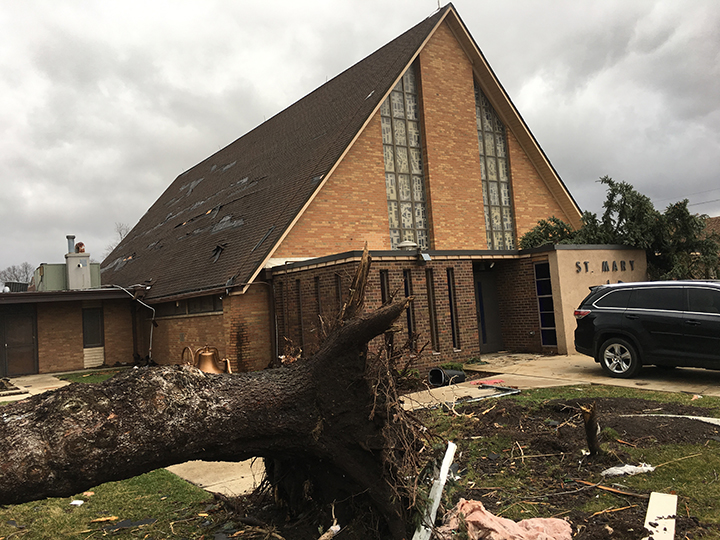 OTTAWA — Deadly and destructive tornadoes that moved through regions of the Diocese of Peoria on the eve of Ash Wednesday have led to extra prayer and charity in the first days of Lent.

St. Mary Church in the village of Naplate, just southwest of Ottawa, sustained structural damage from an EF-3 tornado that struck just before 5 p.m. on Feb. 28. As a result, Masses and other liturgical activities have been suspended indefinitely.

The neighborhood surrounding the church has “terrible, very bad” damage, according to Father Tony Fevlo, SMA, administrator of St. Francis of Assisi Parish in Ottawa. “Some people lost their homes completely,” he told The Catholic Post the day after the storm.

The National Weather Service confirmed three tornadoes in the Ottawa area that evening. The one that touched down in Naplate and also stretched into Ottawa had winds that reached 155 mph. 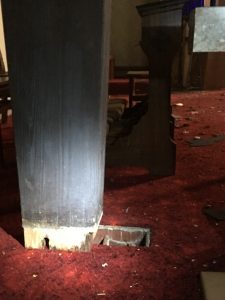 A beam inside St. Mary Church in Naplate was lifted from its floor base. (Provided photo/Father Tony Fevlo, SMA)

Another EF-3 tornado destroyed dozens of buildings in and around the Woodford County village of Washburn. St. Elizabeth Church — built in 1960 but since 2015 used as an additional worship site of St. Mary Parish in Metamora — was not affected, according to Father Gregory Jozefiak, pastor. But a second collection was received at the Metamora parish last weekend as well as St. Mary of Lourdes in Germantown Hills to assist John and Betty Michael of rural Washburn, parishioners in Metamora whose farm home and buildings sustained major damage.

Two persons in Ottawa were killed when an uprooted tree fell on them in the 400 block of State Street. Wayne Tuntland, 76, was pronounced dead at the scene and David A. Johnson, 31, died the following day at OSF Saint Francis Medical Center in Peoria. More than a dozen persons with storm-related injuries were treated at OSF St. Elizabeth Medical Center in Ottawa.

Ottawa schools, including Marquette Academy, were closed the day after the tornado as several streets remained impassable in the city’s southern region while clean-up continued.

St. Mary Parish in Naplate was merged into St. Francis of Assisi Parish, Ottawa, in 2013. The church had continued to host an 8:45 a.m. Mass on Sunday, but Father Tony — who also serves as administrator of St. Patrick Parish in Ottawa – announced the suspension of Masses after speaking with representatives of Catholic Mutual, the Diocese of Peoria’s property insurer.

Those who regularly attended Mass at the Naplate church are encouraged to join parishioners at St. Francis of Assisi Church, where Mass times are 5:30 p.m. on Saturday and 7:30 a.m., 10 a.m. and noon (Spanish Mass) on Sunday.

Two large trees in front of St. Mary Church were uprooted. The winds broke windows in the church as well as the adjacent rectory and parish hall. Many roof shingles are gone.

Most alarming, said Father Tony, is that beams that support the church ceiling were lifted from the floor and no longer rest on their foundations. Cracks are visible on some of the walls and there was water leakage.

St. Mary Church and rectory were built in 1963. A parish center with a meeting hall and CCD classrooms was added in 1984.

The rectory is unoccupied. There was much debris in a bedroom where the windows were blown out.

“The buildings have been secured and we’re continuing our efforts to determine what repairs are needed,” said Melissa Block, claims risk manager for Catholic Mutual. The grounds have been cleaned and windows and roofs temporarily sealed to prevent further water damage.

Father Tony was at the rectory of St. Patrick Church, located further north in Ottawa, when the storm hit.

“I went to the basement,” he recalled. “The wind was too much, and the power went out.” By the time the storm passed, Father Tony’s phone was already ringing regarding the damage in Naplate.

He immediately went to the village but was not allowed into the affected area for two hours because of gas leakage concerns. 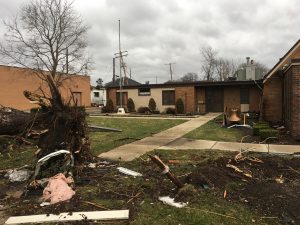 At Masses in his parishes last weekend, Father Tony invited the faith communities to embrace this special Lent.

“We need to act as a parish,” he told members of St. Francis of Assisi. “Since we have begun Lent — with its traditional prayer, fasting and almsgiving — we have an opportunity to reach out to those who are victims of the tornado.”

The parish’s stewardship committee was scheduled to meet Tuesday night to begin discussion on how to put money collected to best use. A regular collection that the committee takes up during Lent netted three times the usual amount when it was announced proceeds would help tornado victims.

“People are calling in ready to help,” Father Tony told The Catholic Post. “I am touched by such generous hearts of people.”

Among those who have offered assistance is the leadership team of St. Patrick Parish in Washington, which responded to the major destruction in that community from a tornado in 2014.

“We sent information on how we handled the situation here,” said Father Stephen Willard, pastor, including how the parish formed a team to respond to different needs and how to handle money and other donations when they came in.

“It’s wonderful,” said Christine Serangeli of the generosity, “but it can be hard to figure out where to go with it.” Serangeli was a member of the Washington parish committee on tornado response.

“We’d like to help and we’re praying for them,” she said.

Members of the Knights of Columbus from the Washington and East Peoria parishes walked the fields of the Michael farm in rural Washburn to help clean and salvage, said Father Willard.