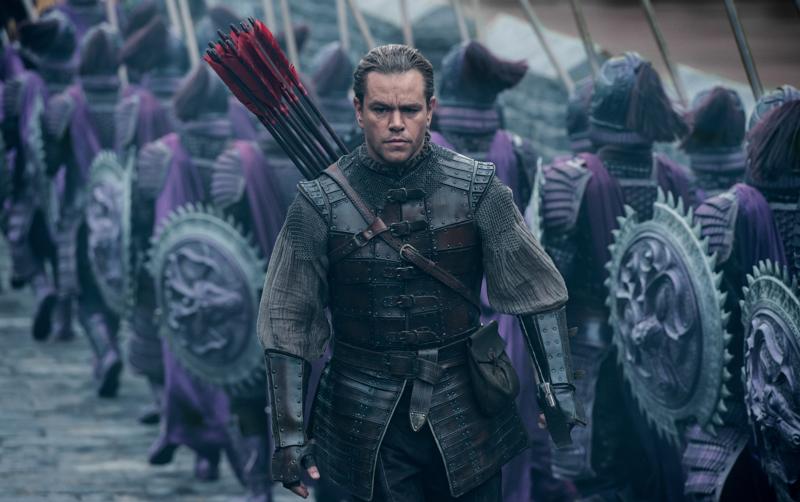 Matt Damon stars in a scene from the movie "The Great Wall." The Catholic News Service classification is A-III -- adults. (CNS/Universal)

Those seeking nothing more from a movie than sheer spectacle may be satisfied with this visually interesting but thoroughly implausible action adventure from director Zhang Yimou.

Drawn by the wealth they could gain by introducing gunpowder into the West, two medieval European mercenaries (Matt Damon and Pedro Pascal) arrive in China, after an arduous journey, only to find their unwilling hosts preoccupied with battling vicious alien monsters. It was to defend against these marauding creatures, so the script claims, that the titular structure was built. As Damon’s character becomes committed to this struggle, not least because he’s attracted to the fetching commander (Jing Tian) of one division of the local forces, his companion remains focused on the original scheme, abetted in it by another traveler (Willem Dafoe) who came to the Middle Kingdom years before for exactly the same purpose, and has been held prisoner ever since.

Epic in scale, the film is shallow in emotion and characterization, though the central romance is completely chaste and the dialogue mostly free of cursing. Probably acceptable for older teens. Action violence with little gore, a mild oath, at least one crude and a couple of crass terms. The Catholic News Service classification is A-III — adults. The Motion Picture Association of America rating is PG-13 — parents strongly cautioned. Some material may be inappropriate for children under 13.