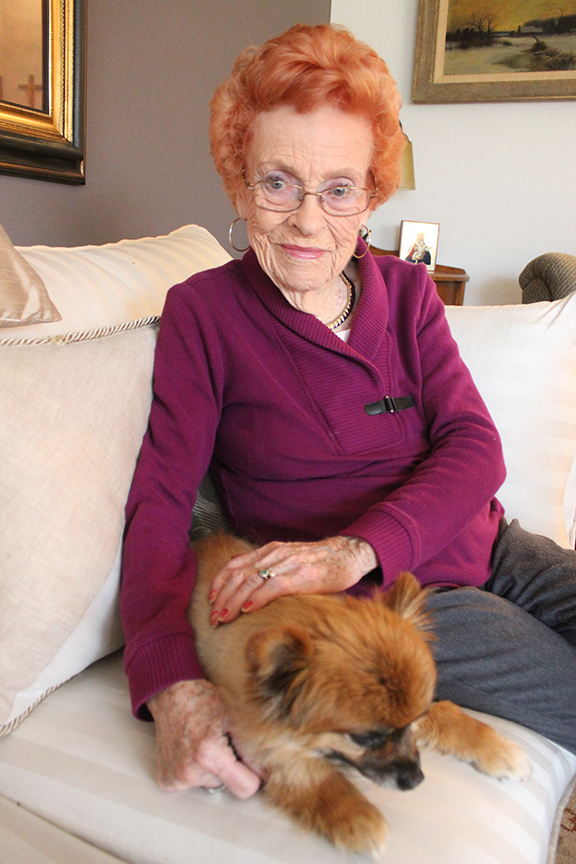 Geraldine "Jady" Metternich of Hamilton, a lifelong resident of Hancock County who will turn 100 on May 8, tries to get her little Pomachu, Beau, to sit still for a photo. (The Catholic Post/Jennifer Willems)

Trained as a hairdresser before learning the clothing business from her brother-in-law, she owned a popular dress shop across the Mississippi River in Keokuk, Iowa, for many years. Signs of her life’s work can still be seen in her impeccable dress and perfectly coiffed red hair as she greets a visitor at the front door of the house she shares with her daughter, Mary Lynne Arms.

Despite the age difference, she takes the newcomer’s arm and carefully guides her down the two steps into the living room so she won’t trip.

“Nobody calls me Geraldine,” she says, when she is comfortably settled on the couch. “Maybe as a child I couldn’t pronounce it. I don’t know. It’s been Jady all my life.” 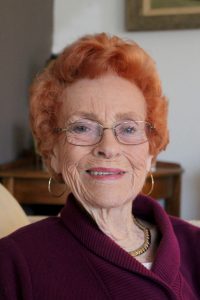 Music, including singing in the church choir, was one of the connecting points for Jady Metternich and her late husband, Lowell. They were married for nearly 61 years. (The Catholic Post/Jennifer Willems)

The youngest of four girls raised in Warsaw — her maiden name was Brady — Mrs. Metternich is the aunt of Father Richard Barclift of Rock Island, a senior priest of the Diocese of Peoria. His mother was her oldest sister.

He remembers that the whole family went to Jady and Lowell Metternich’s house in Carthage for Christmas dinner. “The house was decorated to the hilt and we all sang songs,” he recalled.

That Christmas spirit remains strong. A small sample was still on display in late January, although it was destined to be packed away soon.

“His brother was very, very friendly, but Lowell was a little bit aloof,” she said. “I really had a thing for him right now, but he didn’t for me. He could dance and anyone who could dance in those days, they were A-Number One with me.”

She never missed a dance and when he asked her to go to one with him, that was it. “There was nobody else,” she said.

They were married for nearly 61 years.

In addition to singing in the church choir, Mrs. Metternich would play the organ for Mass during Lent and their son, Jerry, and daughters, Janet and Mary Lynne, soon joined the choir, too. All of them remain musical, with Jerry Metternich directing the men’s choir at All Saints in Keokuk, which is where she attends Mass now. Arms serves as cantor for a small Episcopal faith community, also in Keokuk.

“Their faith, their Catholic faith, has sustained us and our families all of our lives,” Arms told The Catholic Post.

“Without that I couldn’t have done anything — none of us could have,” Mrs. Metternich said, noting that they never missed Mass.

A few points away from being a master, Mrs. Metternich continues to play on the second and fourth Fridays of the month. Macular degeneration has made it more difficult, but she is still able to bid and then lets her partner play the hand.

Father Barclift said despite her affable nature, when it comes to bridge Mrs. Metternich is “a killer.”

“A little of that killer instinct goes a long way,” she said with a laugh. “It helps! But your partner kind of has to have it, too.”

She calls it “the best game in the world.”

“You’re thinking and concentrating all the time. You can’t lose track of anything,” Mrs. Metternich said. “I’ve played pinochle and all kinds of rummy, but nothing can compare with duplicate bridge.”

“And I can tell when she walks in the door whether she’s won or lost,” Arms said, laughing in turn.

While her milestone birthday is May 8, Mrs. Metternich’s extended family with gather over Memorial Day weekend to celebrate. She has five grandchildren and two great-grandchildren, as well as nieces, nephews and cousins.

“There are a couple surprises she doesn’t know about,” Arms promised.