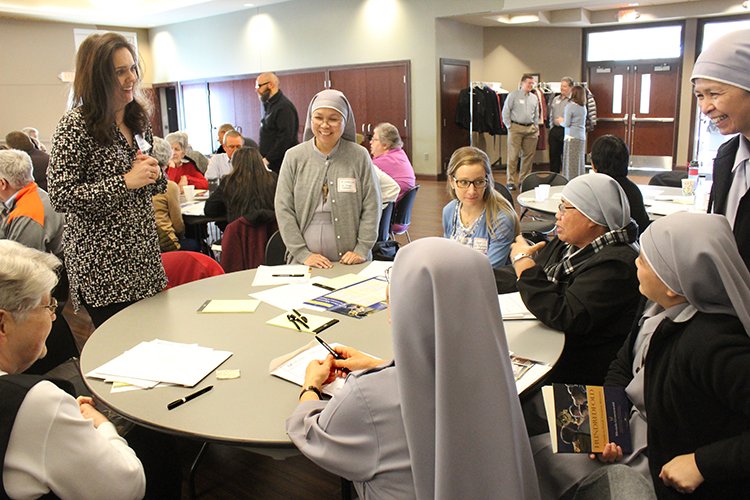 Rhonda Gruenewald visits with the Franciscan Apostolic Sisters, one of several religious communities present for the Hundredfold Workshop on Jan. 21 at Hettinger Hall of St. Jude Parish, Peoria. (The Catholic Post/Jennifer Willems)

Vocations awareness in the Diocese of Peoria got a boost last Saturday when 150 people gathered at St. Jude Church and its Hettinger Hall in Peoria for the Hundredfold Workshop sponsored by the Office of Priestly Formation.

That doesn’t mean each parish will be able to deliver five seminarians to Father Tim Hepner, diocesan vocation director of recruitment, by the end of the year — nor should it, according to keynote speaker Rhonda Gruenewald. 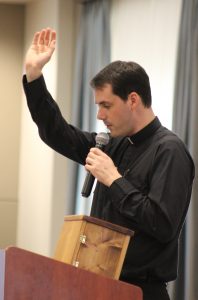 Father Tim Hepner, diocesan vocation director for recruitment, offers a blessing as he commissions participants at the Hundredfold Workshop. (The Catholic Post/Jennifer Willems)

“I’m not in the business of recruiting and neither are you,” she explained, asking the workshop participants to think of success in a new way.

“Let’s focus on creating the environment for the Holy Spirit to plant seeds,” Gruenewald said. “If we do our part, the Holy Spirit will do his part. He cannot be outdone in generosity. You be generous with your time and efforts and it will be fruitful.”

A native Texan who was received into the Catholic Church after marrying her husband, David, 19 years ago, Gruenewald got involved in promoting vocations awareness after being asked to attend a meeting by her pastor at St. Cecilia Church in Houston. Today that ministry has 20 members who are active “in every possible way.”

As a companion to “Hundredfold,” she launched a website, vocationministry.com, to provide additional resources and encouragement.

Gruenewald spoke to the clergy of the Diocese of Peoria last fall during their Priest Assembly Day. As a result, each pastor was asked to identify people who would be invited to form vocations apostolates in the parishes and attend the Hundredfold Workshop on Jan. 21.

Among the laity at the workshop were several parents of priests. There were also many permanent deacons and women religious at the gathering, which included a Mass celebrated by Father Hepner and prayer of commissioning.

Bishop Daniel R. Jenky, CSC, was not able to present, but sent a short video expressing his thanks for their work.

Using her book, “Hundredfold: A Guide to Parish Vocation Ministry,” Gruenewald walked participants through the four areas needed to “prepare the soil” for vocations: prayer, awareness and education, youth, and affirmation. 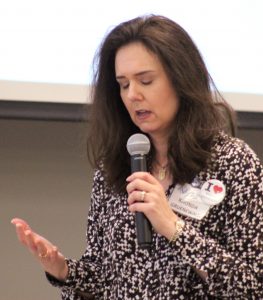 Prayer is a vital first step in promoting vocations, said Gruenewald, including inviting the Holy Spirit into all decisions and meetings. (The Catholic Post/Jennifer Willems)

The book also includes a chart with 57 activities, listed according to where the vocation ministry is in its development, and provides a quick reference to ease of implementation, the best time of year for the activity, lead time and funds required, if any.

The need is great, she said.

“In the United States we have 3,500 parishes without resident priests. Add Canada and the number is 5,200,” Gruenewald said. “The number of Sisters is down to what it was 100 years ago and the idea of sacramental marriage is in decline for our young people.”

The church needs more priests because without them there is no Eucharist, she said simply.

“Why do we need more religious Sisters, Brothers and priests? These men and women are prayerfully serving all of us in their apostolic labor,” she told her listeners. “I just don’t want to know where our church, where our world would be without them.”

Not only are holy marriages needed for their own sake, but because the majority of vocations come from intact families that keep the sacraments close, Gruenewald said.

“Every parish needs an entity promoting vocations,” she emphasized, noting that about 10 to 20 percent of parishes in any given diocese have something for vocations. “That means there’s a lot of potential for growth there.”

Prayer is a vital first step, according to Gruenewald.

“We need to be people of prayer,” she said. “That’s why we need to invite the Holy Spirit into all of our decisions, into all of our meetings, to make sure we are doing what he wants from us and not what we want for us.”

During his homily at Mass, Father Hepner said if workshop participants left and no one had a vocation fair or any other activity except for getting every single person to pray “that would be tremendous.”

Vocations apostolates should take every opportunity possible to have fun, such as having a booth with games featuring vocations at the parish festival or Oktoberfest. Classroom visits by priests, Sisters and seminarians or panel discussions about the priesthood, consecrated life, and sacramental marriage also help to show the joyful face of vocations, Gruenewald said. 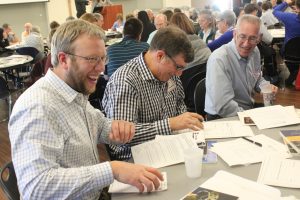 Justin Fullenkamp of St. Malachy Parish in Rantoul, Joe Burke of St. Elizabeth of Hungary in Thomasboro, and Greg Whalen of St. Lawrence in Penfield, all members of the Champaign-Urbana Serra Club, have fun while planning events at the Hundredfold Workshop. (The Catholic Post/Jennifer Willems)

There are plenty of “vocation partners” ready to help, she said, listing Serra Clubs, the Knights of Columbus, and anyone who works with young people, such as teachers, catechists and youth ministers. Gruenewald also provided a packet of resources from Vianney Vocations to get the parish representatives started.

Before they left, each parish or cluster of parishes was asked to select one activity in each of the four categories she presented and set a potential date. She also encouraged them to exchange phone numbers and set a date for their first meeting.

“It’s important not to get overwhelmed. Just start somewhere,” Father Hepner said during his homily. “You are the people God has called. Put one foot in front of the other.”

He added that they shouldn’t be discouraged.

“What gifts you don’t have, God will provide,” he assured them.