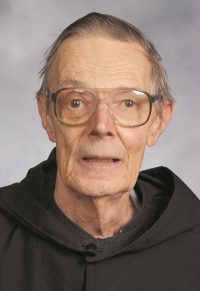 Father Matthew, in his 64th year of Benedictine profession and whose ministry included teaching math at St. Bede Academy and serving as director of housekeeping and maintenance at St. Bede Abbey, died on Tuesday, Jan. 24, 2017, in his room at the abbey. He was 85.

Abbot Philip Davey, OSB, will be preside at the funeral liturgy. Interment will follow in the abbey cemetery.

Born in LaSalle on Dec. 3, 1931, to Charles and Mazie (O’Donnell) Mazzuchelli, he was given the name Charles. He attended St. Patrick Grade School and St. Bede Academy, graduating in 1949.

After two years in the junior college, he entered the novitiate at St. Bede, taking the name Matthew, and was professed on July 11, 1952. He earned a bachelor of arts degree from St. John’s University, studied theology there and was ordained to the priesthood at St. Mary’s Cathedral in Peoria on June 1, 1958.

He taught mathematics and typing for a few years at St. Bede Academy, but in 1961 was put in charge of maintenance and housekeeping for both the abbey and academy, positions he held for decades.

Father Matthew was diagnosed with multiple sclerosis shortly after his ordination and had difficulty walking in his later years. Still, in addition to his duties at the abbey, he assisted on weekends at St. Lawrence Parish in South Wilmington in the Diocese of Joliet for more than four decades.

He is survived by a brother, Michael, of LaSalle.

According to Abbot Philip, among the documents in Father Matthew’s personal file was a typed paragraph dated Nov. 23, 1985, which included the following request: “Just for the record, at the time of my death, it would please me very much if people were asked to make a small donation for the starving people of the world, especially children, instead of the usual Mass offerings.”