Former school comes down, but Sacred Heart Parish in Rock Island is on the rise 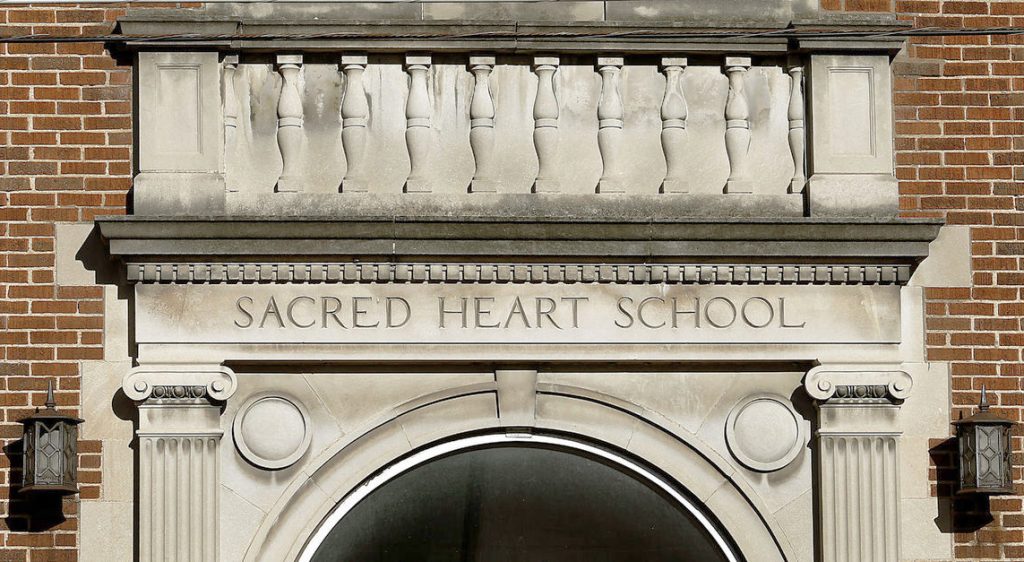 The Sacred Heart name is seen above the main entrance to the former school, built in 1923. (Provided photo)

ROCK ISLAND — The former Sacred Heart School here has come down, but Sacred Heart Parish is “going up,” according to Father Anthony Co, pastor.

“God wants to bless this place,” said Father Co during a Christmas Eve Mass homily at the historic church, located for more than a century along busy 5th Avenue and currently enjoying a resurgence. 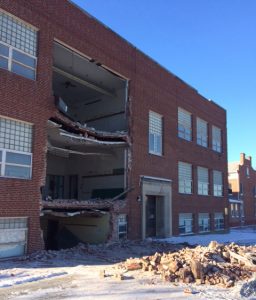 Classrooms are exposed as demolition begins in late December at the former Sacred Heart School, located at the corner of 28th Street and 5 1/2 Avenue in Rock Island. (Provided photo/Chris Mandle)

“We’ve increased in numbers,” said Father Co, noting that parish membership is up 50 percent since June.

But Father Co began his Christmas homily by acknowledging “the real sorrow for our hearts” taking place just south of the church — the razing of the former Sacred Heart School, built in 1923.

“Think of all the great memories that took place in that building — the joy and the peace, and all the kids who had dreams growing up,” said Father Co. “It’s sad for us to lose it.”

The opening of the cornerstone — dated June 8, 1923 — revealed many well-preserved treasures nearly a century old.  They included coins, postage stamps (one and two cents), religious medals, and various publications, both Catholic and secular. A copy of the June 4, 1923, Rock Island Argus had a front page headline reflecting the Prohibition era: “All liquor intended for beverage purposes to be barred from shore.”

A note signed by Father Clement P. O’Neill, pastor, noted the school was built at a cost of $65,000. The note also records that Walter Rosenfield was Rock Island mayor, Len Small was Illinois governor, Pius XI was pope, and Warren Harding was president.

Sacred Heart School, which at one time enrolled 500 students, became part of the consolidated Jordan Catholic School system in 1969 and was then known as Jordan North. It housed the seventh and eighth grade students during its final years as an active school, ending in 2012 when a new addition at Jordan’s campus at St. Pius X Parish brought all students together at that location.

The building continued to be used for parish events, but proved too large for anticipated needs and too costly to maintain.

“IT HAD TO HAPPEN”

“It’s a hard pill to swallow, but I understand it had to happen,” said Mike Smith, now 68, who attended classes at Sacred Heart during the baby boom years of 1954 to 1962. His class size? 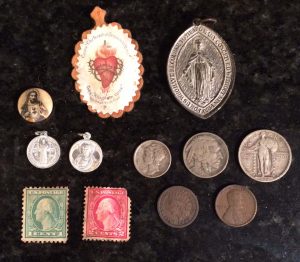 Among the items preserved in the cornerstone of the school building were these coins, stamps, and religious medals from circa 1923. (Provided photo)

“Sixty-two,” Smith told The Catholic Post. “And one nun had us all day.”

In fact, one member or another of the Sisters of Charity of the Blessed Virgin Mary taught Smith all the way through elementary school with the exception of second grade.

“There were 14 Sisters at the peak,” he recalled. “They lived next door. I lived a half block from the church and school. I felt like I was living in a miniature Vatican.”

Under the energetic leadership of Father Co, the parish appears to be climbing toward a new spiritual peak.

“There’s a giant swell of enthusiasm and excitement with both old and new parishioners because of Father Anthony’s work, because of dedicated parishioners, and really the fact that people’s hearts have been enflamed with a real sense of friendship, faith, and love,” said Chris Mandle, who heads the parish welcoming committee in addition to other roles.

“Membership is up, involvement with ministries is up, confessions are up, and there is a palpable spirit of growth,” he continued. “We’re pretty excited for what the future holds.” 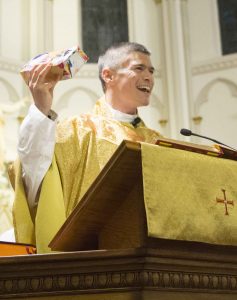 At the Christmas Eve Mass, Father Co determined by a show of hands who in the assembly was the oldest graduate of Sacred Heart School. He presented Judy Clark and Pam Meyers — who both attended in the 1940s — with gift-wrapped school bricks as mementos.

Bricks will also be available for distribution at the parish’s 10 a.m. Mass this Sunday, Jan. 15.

Mike Smith got his commemorative brick early, and also hand-delivered one to Sister Mary Catherina Walsh, BVM, the last principal at Jordan North who is now retired at the religious community’s Mount Carmel Motherhouse in Dubuque, Iowa.

Mandle said significant architectural features of the building such as the arches that say “Sacred Heart School” and the cross atop the building are being preserved. Current plans call for turning the former school site into “a park-like green space initially to help beautify our parish property with extensive landscaping, etc.” while future development options are considered.