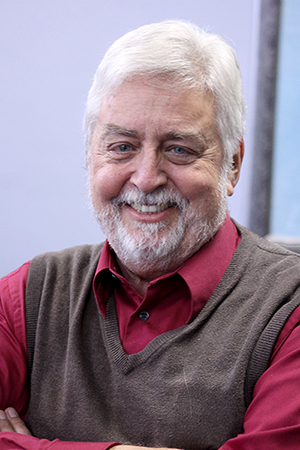 Deacon Rick Miller of Blessed Sacrament Parish in Morton has been named spiritual director of Cursillo for the Diocese of Peoria. (The Catholic Post/Jennifer Willems)

Many people know Rick Miller from his years of work as a doctor in the emergency department at OSF Saint Francis Medical Center in Peoria, while members of Blessed Sacrament Parish in Morton have called him deacon since 2007. As the new year began, he added another “D” title: spiritual director of Cursillo for the Diocese of Peoria.

“We’ll call you Director Doctor Deacon,” someone told him at a Cursillo gathering on Jan. 7.

The appointment, made by Bishop Daniel R. Jenky, CSC, was effective Jan. 1. Deacon Rick succeeds Deacon John Skender, who had ministered as assistant spiritual director and then director for 10 years.

Assisting in the Cursillo office are Jessie Morss and Bette Beveridge.

“This is certainly nothing I went out campaigning for,” Deacon Rick said. “Deacon John Skender had done a marvelous job with Cursillo for years.”

He eventually said “yes” because of a lesson he learned when he made his own Cursillo weekend in 1979.

“If you allow yourself to get closer to God, it’s much more difficult when you find out how positive that is. After we made Cursillo, if someone asked if I’d like to be on a Cursillo team and I couldn’t come up with a good reason (to say no), I said ‘yes.’ In many ways this is just an extension of that approach,” he explained. “I am humbled and honored by this.”

Cursillo, a Spanish word meaning “short course in Christianity,” came at just the right time for Deacon Rick and his wife, Cheryl, and he credits it for being the beginning of his understanding of spirituality.

“I think that’s where the seeds were planted and it’s my hope that the seeds are still growing,” he said, adding that his goal is to make certain those seeds are planted in other lives for years to come.

A FAITH WITH FIRE

Deacon Rick was working 80- or 90-hour weeks — half-time in pediatrics and half-time in the emergency department at OSF Saint Francis — when he ran out of reasons to say “no” to Cursillo. The Millers had a 9-year-old, a 7-year-old and a 6-month-old at the time and were facing some challenges in their relationship.

Deacon Rick said he went into Cursillo as a physician who thought he knew “just about everything” and realized that what he knew were a lot of things that aren’t that important in life.

It wasn’t that he didn’t have faith, he said. “It was that I politely picked up Christ on Sunday morning, gently put him down by noon, and went back to work.”

Cursillo helped him to realize that “the presence of God is more than just an idea” and the Holy Spirit is more than a “mystical concept.”

“I began to look at other things in life as more important than just being a good physician,” Deacon Rick said. “Being a good father, learning how to be a good husband started to take on increased importance.”

Serving on Cursillo teams kept the momentum going, as did working with Cheryl as lay directors of Teens Encounter Christ for five years. Eventually he applied to enter training as a permanent deacon and was ordained on May 19, 2007.

Since then he has been trained as a spiritual director and is “blessed with the opportunity to share some time with a number of directees.” That includes working with the patrons at Sophia’s Kitchen on Wednesday mornings.

He also assists with the wellness program at Caterpillar Inc. and has a busy “grandkid pick-up schedule.”

While there is still much to learn about his new role, Deacon Rick is starting by reaching out to 30- to 60-year-olds that have made Cursillo and asking what drew them.

“I’m just delighted when someone 70, 75 and 80 wants to come to a Cursillo weekend. I think that’s marvelous. But for us to sustain this program, we truly need to touch those people in their 30s, 40s and 50s,” he said.