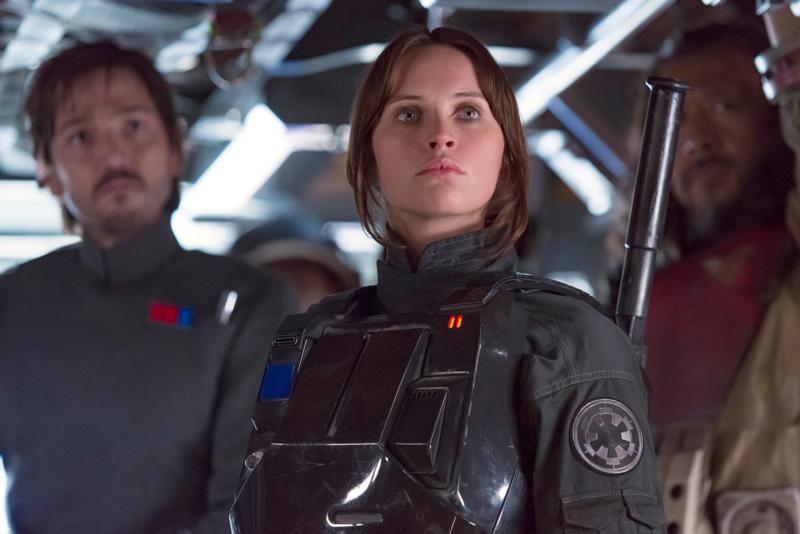 Diego Luna, Felicity Jones and Jiang Wen star in a scene from the movie "Rogue One: A Star Wars Story." The Catholic News Service classification is A-II -- adults and adolescents. (CNS/Lucasfilm Ltd.)

Interstellar derring-do is the order of the day in this rousing prequel to the 1977 kickoff of the “Star Wars” saga. With the evil Empire — served, most prominently, by a computer-generated projection of the late Peter Cushing and Ben Mendelsohn — on the verge of deploying a weapon so powerful that it would doom the gallant Rebel Alliance (headed by Genevieve O’Reilly), the daughter (Felicity Jones) of the brilliant scientist (Mads Mikkelsen) who unwillingly developed the technology while being held captive joins forces with an Alliance officer (Diego Luna) and an amusingly straight-talking android (Alan Tudyk) in an effort to sabotage the armament.

In crafting an exciting epic, director Gareth Edwards keeps the mayhem inherent in his story of armed conflict virtually bloodless. And the script, penned by Chris Weitz and Tony Gilroy, celebrates altruism while also briefly tackling the morality of obeying some military orders. But the ambiguous nature of the spiritual “Force” cultivated principally, in this installment of the franchise, by a blind, Buddhist-style monk (Donnie Yen), may be a source of concern for the parents of some teens.

Frequent but thoroughly stylized combat violence, religious elements requiring mature discernment, some frightening images including a scene leading up to mental torture. The Catholic News Service classification is A-II — adults and adolescents. The Motion Picture Association of America rating is PG-13 — parents strongly cautioned. Some material may be inappropriate for children under 13.