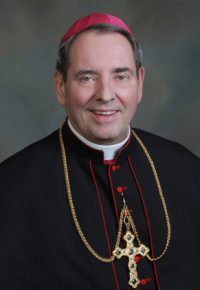 NEWARK, N.J. — Archbishop John J. Myers of Newark, former bishop of Peoria who will observe the 50th anniversary of his ordination to the priesthood on Dec. 17, was hospitalized last week for surgery to repair an injury to his hip.

The Diocese of Peoria had planned to celebrate Archbishop Myers’ jubilee and approaching retirement with an open house during an anticipated visit to central Illinois over Christmas week. That visit has been postponed and will be rescheduled at a later date.

Archbishop Myers, a native of Earlville, was ordained a priest of the Diocese of Peoria at St. Peter’s Basilica in Rome on Dec. 17, 1966. After parish work and holding several diocesan offices — including vocations director and chancellor — he was ordained a bishop on Sept. 3, 1987, and served as the seventh bishop of Peoria from 1990 until his appointment to Newark in 2001.

Pope Francis accepted his resignation last month and named Cardinal Joseph W. Tobin of Indianapolis to succeed him. The Mass of Installation for Cardinal Tobin is scheduled in Newark on Jan. 6, 2017. While that date remains in place, Archbishop Myers will not be able to lead Masses or make appearances at events while undergoing rehabilitation in the coming weeks, according to a spokesperson for the Archdiocese of Newark.

Archbishop Myers celebrated a Mass of Thanksgiving on Oct. 12 at the Cathedral Basilica of the Sacred Heart in Newark to mark several milestones in 2016, including his 75th birthday (July 26), the 15th anniversary of his installation as Archbishop of Newark (Oct. 9), and the approaching golden jubilee of his ordination to the priesthood.

“My heart is filled with gratitude for all of the blessings God has granted me,” he said at that Mass, “from a wonderful family to the opportunity to serve the church in which all of us together are the body of Christ. For the times I failed, I apologize. For the times we were successful, I thank the Lord.”

The Mass was followed by a reception in the Archdiocesan Center.

The Catholic Post carried a detailed biography of Archbishop Myers in the Nov. 20 edition with the story of his retirement.

Well-wishes for Archbishop Myers’ recovery or congratulatory notes for his jubilee and approaching retirement may be sent to him c/o the Archdiocese of Newark, 171 Clifton Ave., PO Box 9500, Newark, NJ 07104.