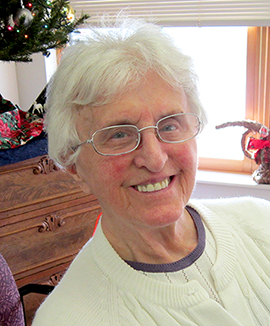 A Mass of Christian Burial will be celebrated on Tuesday, Nov. 29, at 10 a.m. in the chapel of St. Mary Monastery. Burial will follow in Calvary Cemetery, Rock Island.

Born in Tomiselj, Slovenia, on March 19, 1927, Sister Jozefa was the daughter of Franc and Marija (Oven) Seskar. She attended grade school in Tomiselj, but went to high school at St. Mary Academy in Nauvoo.

She entered the Benedictine community in Nauvoo on Sept. 8, 1950, making her first profession of vows on Aug. 22, 1952, and her final profession on Aug. 24, 1955. In addition to her ministry in food service at the Nauvoo monastery and academy, Sister Jozefa served her community at St. Anthony Convent in Atkinson.

In recent years, she partnered with the Blue Cross Mission Ladies of St. Ambrose Parish in Milan.

Sister Jozefa was preceded in death by her parents; two brothers, Father Franc Seskar and Ivan Seskar; and two sisters, Marija Seskar and Francesca Persin. She is survived by her sister, Ivanka Modic; several nieces and nephews; and her Benedictine Sisters, with whom she shared life for 66 years.