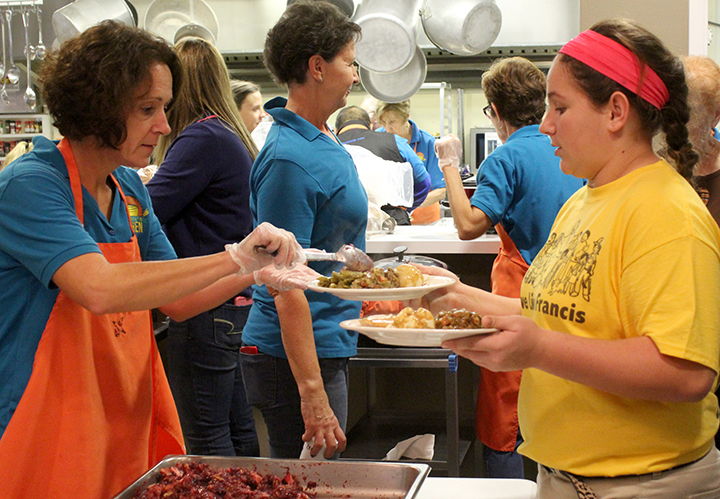 Carrington Gray, a sixth-grader at St. Mary School in Pontiac, waits while cranberry sauce is added to two of the 700 meals that will be served to patrons of Sophia's Kitchen in Peoria for the annual Thanksgiving luncheon. Teacher Amelia Misiak brought 17 students and five chaperones on the "mercy mission" Nov. 17. (The Catholic Post)

Thanksgiving dinner may look a little different to the sixth-graders at St. Mary School in Pontiac after serving turkey with all the trimmings to patrons at Sophia’s Kitchen in Peoria last week. Leading a life of JOY will do that.

“John Paul II has a quote, ‘Man cannot fully find himself except through a sincere gift of himself,’” said Amelia Misiak, who teaches sixth, seventh, and eighth grade religion and social studies at St. Mary. “I wanted to expose my students to living a life of JOY — Jesus, Others, Yourself — putting Christ at the center and then serving our brothers and sisters, and yourself last. I think through that, they can find true joy.” 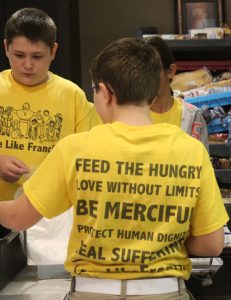 The 17 students from St. Mary School in Pontiac wore t-shirts that declared their intention to “Love Like Francis” by serving others. (The Catholic Post/Jennifer Willems)

In doing that they are also living the Corporal and Spiritual Works of Mercy, she said, noting that the children will be engaged in a number of these “mercy missions” throughout the school year.

“I can’t take them on mission trips, per se, so I’m taking them on small mercy missions,” Misiak told The Catholic Post.

While the sixth-graders were the first to be of service at Sophia’s Kitchen, the seventh- and eighth-graders will take their turn, too. The students will continue to “feed the hungry” by working with the parish’s St. Vincent de Paul Food Pantry, and promote human life and dignity by offering prayers and help for the Caring Pregnancy Center in Pontiac in January.

To “clothe the naked,” they collected 1,000 pairs of socks in October, making it “Socktober.”

“IT MAKES YOU HUMBLE”

To prepare them for their experience at Sophia’s Kitchen, Misiak talked to the students about JOY and how it applies to all aspects of life.

“At home, does Mom really have to ask you to wash the dishes? No. You know that. Putting Mom in front of you. Putting your sister in front of you when she wants to watch a different TV show,” she explained. “We are the hands and feet of Jesus. We are called to go out and to be Christ to other.” 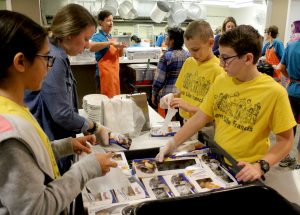 Teacher Amelia Misiak of St. Mary School in Pontiac works with her sixth-graders to bag doughnuts for the sack lunches that were provided for the patrons of Sophia’s Kitchen who did not stay for the sit-down Thanksgiving luncheon on Nov. 17. (The Catholic Post/Jennifer Willems)

The students will journal and talk about their experiences, and write about them in their language arts class. They may also put together a newsletter to share what they have seen and felt with the parish as a way of inspiring others to do the same, Misiak said.

The students didn’t just put JOY into action by setting the tables, serving the dinners, desserts and drinks, and cleaning up afterward. Their bright yellow t-shirts also proclaimed their desire to “Love Like Francis” as they “Feed the Hungry. Love Without Limits. Be Merciful. Protect Human Dignity. Heal Suffering.”

The message wasn’t lost on Carrington Gray, who admitted to feeling a little nervous when the class arrived at Sophia’s Kitchen.

“After a couple minutes, when you’re serving, you just have a feeling of happiness,” she said. “You feel like you’re doing something.”

Classmate Aidan Greil said being with persons who are in need changed his perspective: “Some people have it like this and we get mad about the little things.”

“We’re doing what Jesus would have done,” he told The Post. “It makes you humble.”

The patrons love having the students around, according to Claire Crone, director of Sophia’s Kitchen. 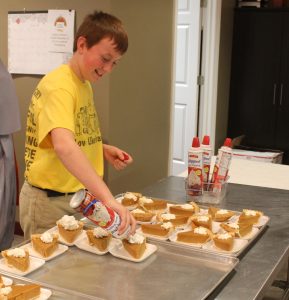 While joy can be found in a well-prepared piece of pumpkin pie, sixth-graders at St. Mary School in Pontiac found that true JOY comes from serving Jesus, Others, Yourself, as they helped with the annual Thanksgiving luncheon at Sophia’s Kitchen. (The Catholic Post/Jennifer Willems)

“We had so many kids I was able to put one student per patron, so they were able to individually give attention to each patron,” she said. “Everybody had that special touch of love. That was great.”

Students from St. Vincent de Paul School in Peoria were there earlier in the day.

It was a big help to have enough hands to get everything done, Crone said. Sophia’s Kitchen typically provides 500 to 600 meals a day during the week, and she estimated that about 700 meals were served at the Thanksgiving luncheon.

“I think sometimes we think that stuff can make us happy, or people, but it’s really when we give ourselves to others that we find true happiness,” Misiak said. “That’s what I seek to teach my students.”