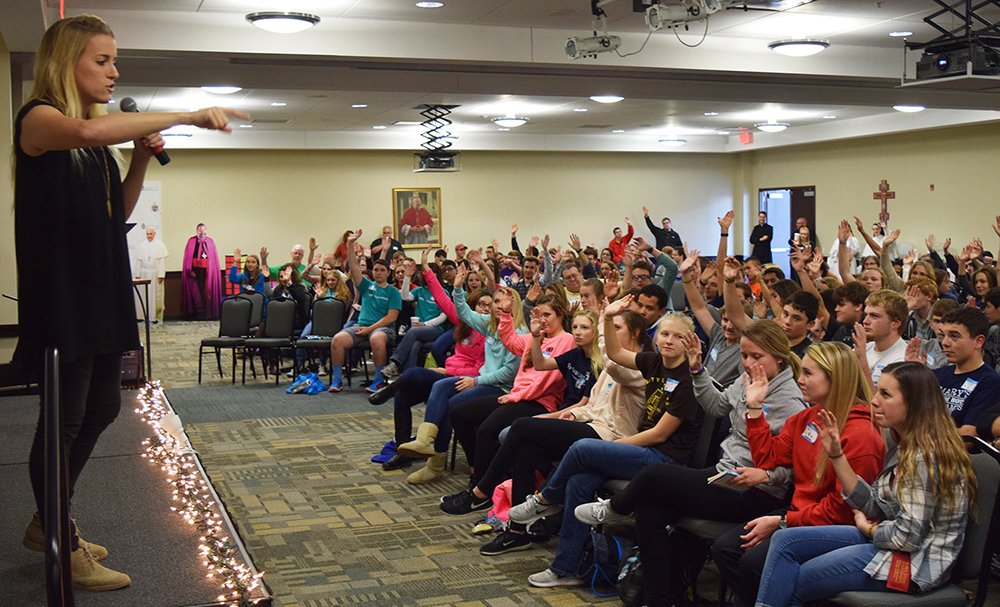 The nearly 300 teens at Youth Rally 2016 raise their hands when keynote speaker Emily Wilson asked if they want to be happy and fulfilled in life. The Catholic musician from California urged them to find their joy in a life centered on Christ. (The Catholic Post/Tom Dermody)

How many followers do you have on Instagram? What kind of clothes do you wear? What does your body look like? To which events do you get invited? Who are your friends?

“The world says that is who you are as young people,” said California musician Emily Wilson, speaking to nearly 300 teenagers gathered Nov. 12 for the annual Youth Rally of the Diocese of Peoria.

“God is saying you are made for so much more,” added Wilson.

Encouragement for teens to find their true identity in Jesus Christ was a theme that ran throughout the rally that began at the Spalding Pastoral Center in Peoria and ended with a Mass celebrated by Bishop Daniel R. Jenky, CSC, at St. Mary’s Cathedral.

“Let God be at the center of your existence and you will have treasure beyond compare,” Bishop Jenky urged the youth at the closing Mass.

Noting that “even the most beautiful possessions eventually turn to junk,” the bishop — sharing a story about how he put a long scratch on a new car just a month after he got it this summer — asked the teens to set their hearts “on things that are eternal.”

The rally began at noon Saturday and featured two keynote presentations, breakout sessions, music, social time, talks on vocations, and a candlelit Holy Hour with the opportunity for the sacrament of reconciliation. 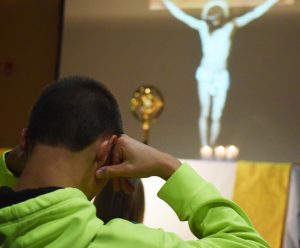 “We come to Youth Rally because it’s a big day, to make friends and to hear speakers who encourage us in the faith,” said Shirley Plaag, coordinator of the diocesan Office of Evangelization and Faith Formation. “But the most important thing here is the sacraments. Eucharist. Confession. These are the highlights of the Youth Rally.”

After the Blessed Sacrament was brought into a darkened auditorium by Father Kyle Lucas, parochial vicar of Blessed Sacrament Parish in Morton, students prayed quietly for an hour while many of them received the sacrament of reconciliation at one of several stations set up throughout the pastoral center.

Attending the rally with the teens were dozens of priests and consecrated women from throughout the diocese.

The first speaker to encourage the youth to find their identity in God was a Texan nicknamed “Gomer” who proudly identified himself as a “nerd.”

“You are right now defining, shaping, and molding your life, your future,” said Mike Gormley, a lay evangelist from Houston whose fast-paced presentation combined humor with deep insights for the high-school aged crowd.

After noting how teenagers are constantly asked by relatives “Have you chosen your college yet?” or “What’s going to be your major?,” Gomer said true happiness and fulfillment is found in God’s plan, including through self-giving love, and not through today’s “idols” such as wealth, beauty, sex and power.

“If Jesus Christ is the center of your life — not a thing you add to your life, but your all-in-all — life won’t magically become easy,” said Gormley, the married father of four young children. But God is the only one worth living for, he said, and “wants to give you an infinite horizon.”

Gormley emphasized that it’s okay for Catholic young people to have questions about their faith.

“That means you are taking it seriously,” he said, contrasting it with teens who simply respond with an indifferent “meh” when faith is being discussed.

WHAT WILL OTHER PEOPLE THINK?

She pointed to the example of a 14-year-old Mexican martyr, St. Jose Sanchez del Rio, who was canonized by Pope Francis in October. St. Jose Sanchez was tortured and killed by government officials in 1928 during the Cristero War when he would not renounce his faith.

Rachel Carroll from Pontiac receives Communion at the Youth Rally Mass in St. Mary’s Cathedral. (For The Catholic Post/Daryl Wilson)

Like St. Jose Sanchez and others who live the faith in a bold way, “I cannot renounce who I am,” said Wilson, who distributed copies of her book “I Choose the Sky” — featuring reflections on 17 women in the Bible — to all girls attending the rally. “I cannot, and I will not.”

Wilson, who led worship music throughout the rally, punctuated her talk with repeated melodic “Can I get an amen?” invitations to the teens, who responded with their own sung “Amen!”

She asked the youths to want more than what the world offers.

“Do you want to strive for greatness, or do you want to settle,” she asked.  “We were created very carefully by the God of the universe. And that is the core of who we are. Through our baptism, we are sons and daughters of the living God.”

In vocations talks at the close of the afternoon, Father Timothy Hepner — diocesan director of vocations for recruitment — said he hopes the young people become “whatever God wants you to be.” He called the priesthood a “huge adventure, incredibly challenging.”

“God is calling each of us to something very happy, fulfilled,” she told the teens. “This is how God called me.”

EDITOR’S NOTE: More photos from Youth Rally 2016 will be posted on The Catholic Post’s site on Facebook.