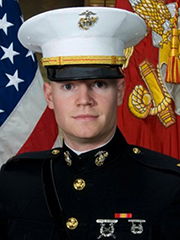 PERU — St. Bede Academy is asking for help to complete a mission begun by Marine Captain Thomas John Heitmann a year before the Mendota native died serving his country in 2011: to build a track facility on the Academy grounds.

Though St. Bede Academy’s campus is part of 1,000 acres, there is no track facility. Students train on asphalt or inside.

The latest push to fund the project was announced by the Academy as well as Captain Heitmann’s family and friends to coordinate with Veterans Day earlier this month as well as Nov. 23, which would have been his 33rd birthday.

Captain Heitmann, a 2002 graduate and former St. Bede athlete, was killed on Sept. 19, 2011, during a helicopter training mission at Marine Corps Air Station at Camp Pendleton in southern California.

“We want to honor Thomas and his service by reaching our goal and his dream by bringing a track to St. Bede by the 15th anniversary of Thomas’ graduation this spring,” said Abbot Davey.