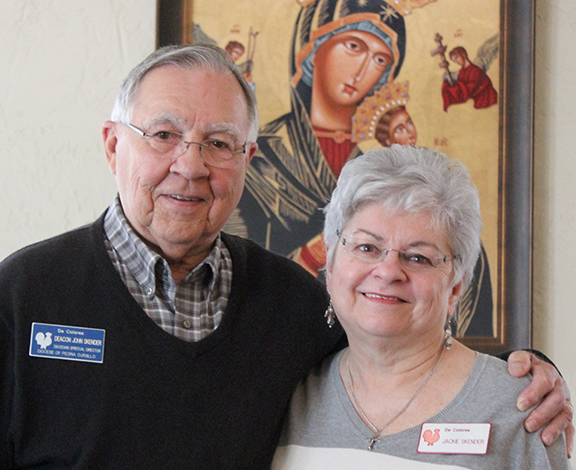 Deacon John and Jackie Skender stand in front of an image of Our Lady of Perpetual Help in the chapel dedicated to her in the Spalding Renewal Center in Peoria. (The Catholic Post/Jennifer Willems)

“I’m not going to disappear,” he said with a laugh.

That’s a good thing, since the people who are involved in Cursillo around the Diocese of Peoria are planning a celebration to thank Deacon Skender for his 10 years of ministry as assistant director and then director on Saturday, Dec. 3. Unlike his 80th birthday party, which was a surprise, this gathering will be held at 7 p.m. at St. Mark Church in Peoria, where he has served as a permanent deacon since his ordination in 1997.

He just shakes his head in amazement as he considers where the Lord has led “little Johnnie Skender from the south side of Peoria.”

He grew up in a part of town that had four Catholic churches within blocks of each other — St. John, St. Boniface, St. Patrick and St. Joseph. John and Matilda Skender raised their two sons and daughter in St. John Parish, sending them to school there.

Deacon Skender was the oldest and when he learned that his father was going to send him to a public high school, he spoke up.

“I told him, ‘It’s your moral responsibility to send me to a Catholic high school.’ I was an arrogant little guy,” he said, laughing again. In the end, the Skender boys attended Spalding Institute and their sister went to Academy of Our Lady.

“They were very humble folks. They didn’t have much money,” Deacon Skender recalled. “I look back now and think $100 a year tuition wasn’t bad, but back then it was.”

In addition to a good education, his parents gave him invaluable lessons in life and faith.

“Dad was a very peaceful person. He never met a stranger,” Deacon Skender said. “He rode the bus to work in downtown every day and only had friends.”

His mother was never without her rosary and he remembers her praying constantly.

“A good example of intercessory prayer was when my mother was just about ready to go into the nursing home. She always had a rosary around, but I noticed there was not a rosary,” he said.

“Mom, do you still pray like you used to?” he asked her. “She said, ‘Why do you think you’re doing so good?’ That left me speechless.”

Deacon Skender also credits his wife of 55 years, Jackie, as being a “prayer warrior” and said she has been “the wind beneath my wings” since long before the Bette Midler song ever became popular. She has worked in the Cursillo office with him and will leave when he does.

“IT’S BEEN A BLESSING”

When he went on his Cursillo weekend in 1973, Deacon Skender didn’t know it was a Spanish word for “short course” and was intended to be a short course in Christianity. He had been invited to attend by a friend he had sponsored when the man was received into the Catholic Church with his children.

In addition to a deeper faith, he came away from Men’s Cursillo No. 33 with greater appreciation for all people. That included his boss at Illinois Bell, where he worked as an installer and repairman for 39 years.

Cursillo got him “out of the pew” and he said, “It kind of forces you to get out of your comfort zone.” It also planted the seeds of his vocation to the permanent diaconate, although it took about 20 years for those seeds to germinate.

“I had an urge, but I never felt worthy or gifted enough to do that,” Deacon Skender said. “I think because of Cursillo and getting involved in giving talks and each little baby step, it just sort of happens.”

He looks back at providing spiritual leadership to the Cursillo teams and candidates and is grateful for the clergy and lay people who have given their time so generously to share their Catholic faith with others. “It’s been a blessing. It’s been amazing,” he said.

And if they ever run out of things to do, there’s that basement at home that needs a good cleaning. . . .