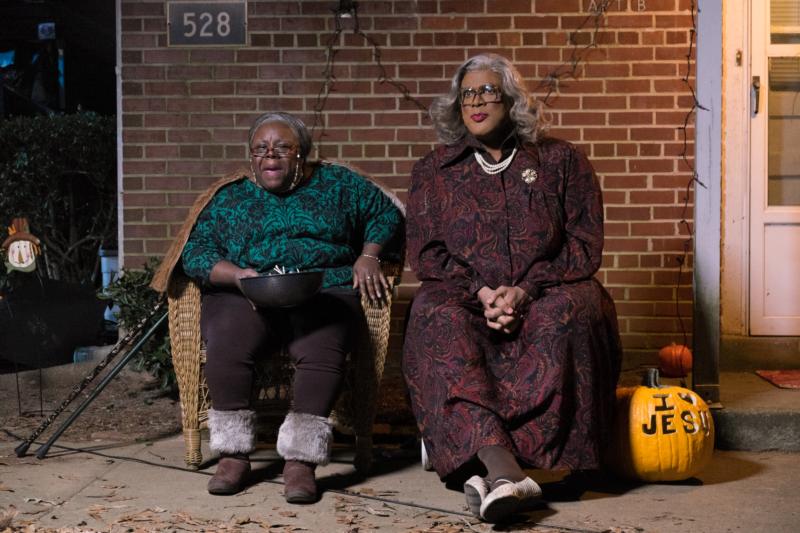 Cassi Davis and Tyler Perry star in a scene from the movie "Boo! A Madea Halloween." The Catholic News Service classification is A-III -- adults. (CNS/Lionsgate)

The language-fracturing violence-threatening moral force in a muumuu (played, of course, by writer-director Tyler Perry) still gives out with the bickering and the lightning-fast asides. But Perry’s script gives her little to do other than mingle with college students and trash-talk with her elderly friends.

The hammer-wielding harridan tries, unsuccessfully, to prevent the 17-year-old niece (Diamond White) she’s minding from attending a raucous fraternity party. Once defied, she turns up at the shindig herself, showing off her dance moves and leering at the guys until she and her charge are both tossed out. After that, the humor turns on the fact that White’s character has managed to convince Madea and her clan — including her pot-smoking cousin (Cassi Davis) — that their family’s dwelling is haunted by ghosts from an old murder. As in all Madea stories, much is made of the beneficial effects of corporal punishment and the need for the young to respect their elders.

Occasional nonlethal violence and marijuana use. The Catholic News Service classification is A-III — adults. The Motion Picture Association of America rating is PG-13 — parents strongly cautioned. Some material may be inappropriate for children under 13.