BLOOMINGTON — By next fall, the body of Christ will be one body at Corpus Christi Catholic School.

Ground was broken for a new wing on Sept. 23 that will bring the junior high students to what is now the elementary school campus and unite the school at 1909 E. Lincoln St. Next year’s sixth- , seventh- and eighth-graders stood where their new homerooms will be while representatives from their classes helped to turn the first shovels of dirt. 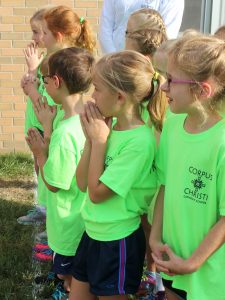 Father R. Anthony Lee, pastor of Holy Trinity and St. Patrick parishes in Bloomington, offered the prayers of blessing and then sprinkled holy water on the ground that will yield six classrooms, including a dedicated science lab, additional storage space and restrooms over the next year.

“We dedicate this new school addition to the progress of the sciences and to learning. May it become a place where students and teachers, imbued with the words of truth, will search for the wisdom that guides the Christian life and strive wholeheartedly to stand by Christ as their teacher,” he prayed.

“O God, it is by your gracious favor that today we begin this new work dedicated to the education of students at Corpus Christi Catholic School,” Father Lee continued. “Grant that those who will come here as teachers or as students may always pursue the truth and learn to know you, the source of all truth.”

Principal Gwenn Roche told those who were gathered in the green space that extends from the fifth grade hallway that they were getting a glimpse of the future. In addition to the junior high students, the rest of the student body, parents, faculty and staff lined the perimeter of what will be the new wing.

She offered thanks to everyone who had a hand in planning the project, including Father Lee and Msgr. Gregory Ketcham, pastor of St. Patrick Church of Merna in Bloomington and St. Mary in Downs, and the school’s education commission. Roche also expressed gratitude to Dr. Sharon Weiss, superintendent of Catholic schools for the Diocese of Peoria, who was present for the ceremonial groundbreaking; and Msgr. James Kruse, vicar general; Patricia Gibson, chancellor; Andrew Hagemann, property and risk management; and Russ Courter, director of finance for parishes and schools for the Diocese of Peoria.

In addition, she recognized architect David Leggans of the Farnworth Group, and Bob Berns and Paul Berns of Johnco Construction Inc., which is building the $1,587,000 junior high wing.

“Most of all, I would like to thank our school families, faculty and staff,” Roche said. “They have continued to love and support this school in its many phases over the years and we know that support and love will continue.”

Construction began on Oct. 1 and the structure is expected to be enclosed before winter weather 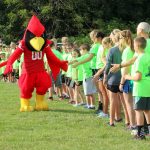 The groundbreaking came at the beginning of Corpus Christi’s annual track-a-thon, which raised nearly $30,000 for the school this year. Among the special guests was Reggie Redbird, the mascot of Illinois State University. (The Catholic Post/Jennifer Willems)

“We want to have the summer for the teachers to be able to set up their rooms, move all of the furnishings and things that need to be moved and not be under pressure to do that in a day or two,” Father Lee said. “Then, in mid-August, the students will be in.”

Having all of the students on one campus will give the older students a better sense of mentoring their young counterparts and offer everyone “a whole new experience of school,” he said.

No capital campaigns or special fundraising were required to pay for the project, since leaders of supporting parishes have been setting aside money for the last few years, Father Lee told The Catholic Post.

“The diocese has been generous and will loan us the other half,” he said. “The savings from having one campus will allow us to very easily and quickly pay back that loan.”

Father Lee has asked some of the ministries in the community, particularly the Society of St. Vincent de Paul, to do a feasibility study of how the current junior high building at 705 N. Roosevelt St., might be used. One possibility is bringing together the clothing pantry and food pantry — and possibly the soup kitchen.

The goal, he said, is “to really make it a center where we can serve the community.”

Corpus Christi enrolls 480 students in preschool through eighth grade, with 119 students in the junior high.