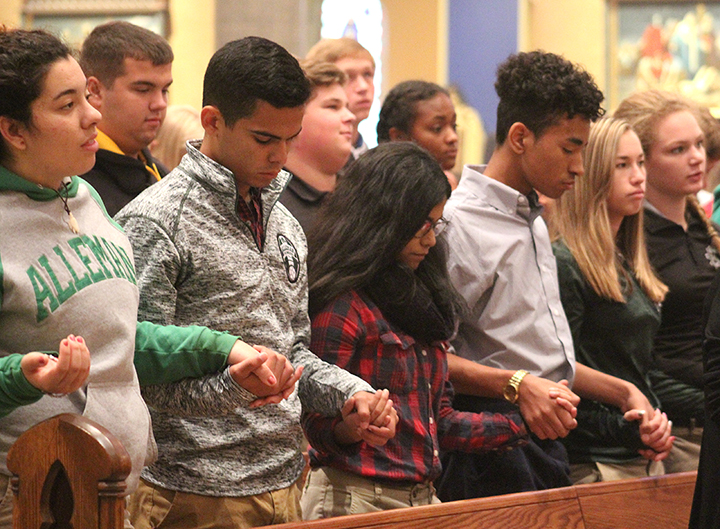 Macey Loiz, Eric Raya, Lizbeth Raya and Caillou Pendleton from Alleman High School in Rock Island join hands in prayer at the Respect Life Mass at St. Mary's Cathedral in Peoria on Sept. 30. Bishop Jenky said praying in Jesus' name is what will ultimately overcome the "culture of death."

A full weekend of opportunities to witness to the sanctity of life started with prayer, as Bishop Daniel R. Jenky, CSC, joined Catholic school students and other defenders of life for Mass at St. Mary’s Cathedral in Peoria on Sept. 30.

Among the concelebrants at the annual Respect Life Mass were Father William Miller, IC, who chairs the Diocesan Respect Life Board, and the chaplains of several of the Catholic high schools, who accompanied their students.

“It is a great blessing in my life to be with all of you who are so committed to the Gospel of Life,” Bishop Jenky said as he welcomed those gathered in the mother church of the diocese. He added that the Gospel of Life would prevail against the culture of death with what they did that morning — pray in the name of Jesus. 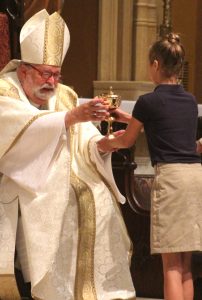 Cancer survivor Grace Jenkins of St. Patrick School in Washington demonstrates how precious the gift of life is as she presents the hosts that will be consecrated to Bishop Jenky at the Respect Life Mass. (The Catholic Post/Jennifer Willems)

The abortion industry profits from this “carnage” and even sells human body parts, which flagrantly denies the human rights of a whole category of human beings, according to Bishop Jenky. He said that politicians are often coconspirators in this “massive injustice,” including “pro-abortion self-described Catholic politicians.”

They, and other “so-called Catholics” who support abortion, will face the judgment seat of God one day, he said.

“DO NOT BE AFRAID”

Nevertheless, Bishop Jenky urged his listeners not to be discouraged.

“The majority of Americans, the majority of our fellow citizens, still oppose the legal destruction of human life. Overwhelmingly, most Americans oppose using tax money to fund abortion,” he said.

They also oppose using abortion as an ordinary means of birth control and as a way to “eliminate an unpreferred gender,” as well as late-term abortions, the bishop said, encouraging them to redouble their efforts.

“As St. John Paul II said . . . do not be afraid,” Bishop Jenky reminded them. Jesus Christ, the risen Lord, is the greatest power the world has ever known and “if God is for us, ultimately intrinsic evil will never prevail.”

One of the gift bearers at Mass demonstrated how precious the gift of life is. Grace Jenkins, a seventh-grader from St. Patrick School in Washington, survived leukemia when she was in the second grade. She was accompanied by her principal, Doreen Shipman.

Grace was one of nearly 250 students from elementary and secondary schools around the diocese who attended the Respect Life Mass. Afterward, they were invited to explore the relics in the cathedral’s St. Thomas More Chapel and visit the Archbishop Fulton J. Sheen Museum and Diocesan Historical Museum at the Spalding Pastoral Center.

Bishop Jenky stayed to greet them in the narthex of the cathedral as they left, posing for individual and group photos.

A reception followed at the nearby Family Resources Center.