Our prayers and the way we live our lives can change history.

That was among the messages of the Blessed Virgin Mary at Fatima nearly 100 years ago emphasized anew last weekend as the International Pilgrim Virgin Statue of Fatima’s “Centennial U.S. Tour for Peace” made several stops in the Diocese of Peoria.

“We do not worship Mary, she is not God,” said Father Chase Hilgenbrinck during a Mass at St. John’s Catholic Chapel at the University of Illinois in Champaign, where the traveling statue was present on Saturday and Sunday. 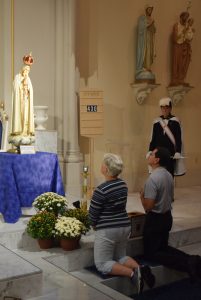 Deacon Robert Rodriguez and his wife Minda pray at the International Pilgrim Virgin Statue during its stop at Corpus Christi Church in Galesburg on Sept. 16. (The Catholic Post/Tom Dermody)

“Yet we know God has used her as a powerful instrument to change human history, to say ‘yes’ to the birthing of the Son of God and forever remain our intercessor,” continued Father Hilgenbrinck, assistant chaplain at St. John’s Catholic Newman Center on campus. (Click here for a podcast of Father Hilgenbrinck’s homily.)

While the messages of Mary to three children in Portugal during a series of apparitions in 1917 have many facets, Father Hilgenbrinck’s homily summarized them as follows: “That we join in prayer with the Immaculate Heart of Mary in doing reparation for the sins of the world, and that we have an effect on history because of our faith, or because of a lack of our faith; because of our prayers, or for the lack of our prayers. We will change history.” 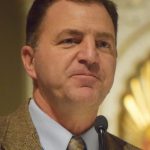 Accompanying the statue — sculpted in 1947 from directions given by one of the Fatima visionaries, Sister Lucia — at stops in Galesburg, Champaign, Bloomington, and Peoria was Larry Maginot, custodian. The statue is on a two-year tour of the United States, traveling via a blue bus  to inspire prayer and devotion as next year’s centennial approaches.

Its tour in the Diocese of Peoria came just prior to October, a month of special devotion to Mary and the rosary.

“Every time Our Lady appeared at Fatima, she repeated: ‘Pray the rosary every day to bring peace into this world,’” said Maginot on Friday before an evening of prayer at Corpus Christi Church in Galesburg. Earlier that afternoon the statue was hosted by Costa Catholic School.

Saying the hearts of Jesus and Mary work “in tandem” to bring us closer to God, Maginot urged those present to answer “yes” to Mary’s invitation to offer themselves to God, accept sufferings in order to save souls and make reparation for sin, and pray the rosary daily. 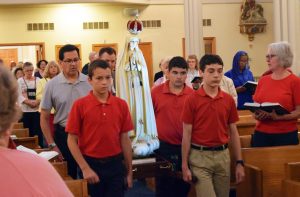 “How powerful our own self-offering is in union with the sufferings of Christ,” said Maginot.

Charles Carr, a member of Blessed Sacrament Parish in Morton who coordinated the statue’s tour in the Diocese of Peoria, called the statue’s four days here “explosive” and “utterly amazing.”

In Bloomington, for example, some 1,000 Scapulars of Our Lady of Mount Carmel were distributed during the statue’s visits to Holy Trinity Church and Corpus Christi Catholic School — causing a scramble to fill the demand.

Maginot said that, in Champaign, a man told him his parents were present in 1948 at St. Meinrad, Indiana, when the statue was on its first U.S. tour. The couple prayed that they could conceive a child. “That person believes he was the result of that prayer,” said Maginot. 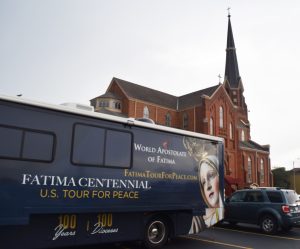 The bus transporting the International Pilgrim Virgin Statue of Fatima on its two-year “Fatima Centennial U.S. Tour for Peace” is parked outside Corpus Christi Church in Galesburg on Sept. 16. (The Catholic Post/Tom Dermody)

While Mary’s Fatima message came as a way to peace during World War I, Father Hilgenbrinck pointed out another dramatic way Mary’s intercession changed history — the survival of Pope John Paul II after an assassination attempt on May 13, 1981.

The future saint “had no doubt it was Mary’s intercession” that changed the course of the bullet, which missed his aorta by millimeters, said Father Hilgenbrinck. In gratitude, Pope John Paul II visited Fatima the following year and placed the bullet in the crown of Mary’s statue there.

The bullet is now the crown’s “most precious jewel because it proclaims the power of Mary’s intercession and the power of God,” said Father Hilgenbrinck.

Prior to leaving the diocese for its next stops, the statue was brought to the Spalding Pastoral Center for an unscheduled visit to the Archbishop Fulton J. Sheen Museum. Bishop Sheen had a deep devotion to Our Lady of Fatima, noted Maginot.