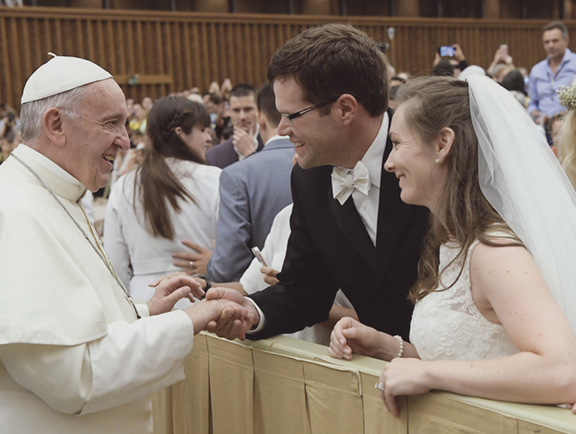 Molly Meyer feels certain the saintly pope played matchmaker for her and her new husband, John, who were married by Father Luke Spannagel at St. John’s Catholic Chapel in Champaign on Aug. 6. He also made it possible for them to start their life together with a “sposi novelli” blessing from the current pontiff, Pope Francis, by initiating the tradition.

The Peoria couple said going to Rome allowed them to spend their honeymoon returning to the origin of their love, as they had been advised to do by theologian and friend Adrian Walker.

“It’s something we’ll always remember. We placed ourselves in the heart of the church, where we were surrounded by other couples, other pilgrims, so we could meet Christ.” — John Meyer

“Both of us had searched for quite awhile for our vocation and it meant a lot to us to finalize it in the sacraments where the church was founded,” said John, a social studies teacher at St. Philomena School in Peoria.

“It’s a beautiful expression of the gift that marriage is,” Molly said.

The “sposi novelli” (newlywed) blessing is extended to couples who have been sacramentally married in a Catholic church within two months of the papal audience they wish to attend. Requests are coordinated through the U.S. Bishops’ Office for United States Visitors to the Vatican and tickets are only given if the couples can present a certificate of marriage signed by the priest who married them.

Each couple is greeted by the pope, who offers them a blessing and a special rosary. They may wear their wedding attire, as the Meyers did.

“The wedding gown had better airline seats than John and I had on the way there and back,” said Molly, who is employed by Ruah Woods Press and writes Theology of the Body curriculum for middle school students. “You carry it on and they put it in first class for us.”

The couple elected to attend the Aug. 10 audience, which was scheduled to start at 10 a.m. To clear security, however, they had to arrive by 6:30 a.m.

“There were huge crowds of people. They were waving and yelling,” Molly recalled. “Every time a bride appeared it happened all over again. It was a lot of fun.”

Because of the hot August weather in Rome, the audience was held inside the Paul VI Hall at the Vatican. There were about 80 “sposi novelli” couples there.

“It’s so moving to be in front of the Vicar of Christ.” — Molly Meyer

When Pope Francis approached them, John introduced himself and Molly in Spanish and kissed the pope’s ring. While there wasn’t a conversation, the experience was profound for both of them.

“I think the best part for me was the amount of time he took with every couple,” John said. “He was close to us. He allowed us to not only speak with him but embrace him.”

“It’s so moving to be in front of the Vicar of Christ,” Molly said. “He spent so much time with so many people before he even got to the newlyweds. I’ve said to other people I would be exhausted just coming into the auditorium if I were him.”

After the audience they went through the Holy Door for the Year of Mercy at St. Peter’s Basilica and prayed at the tomb of St. John Paul II. Molly had prayed that he would send her a good, holy spouse and so did several friends of hers, so it was an opportunity to thank him.

He had his work cut out for him, though.

HEART OF THE CHURCH

John was raised on a working cattle ranch in Montana, earning a degree in agriculture education from Montana State. He taught in California for three years and found professional fulfillment, but wasn’t fulfilled personally.

Challenged to give his life to Christ, he worked as a missionary with the Fellowship of Catholic University Students for two years at South Dakota State. He explored the priesthood and religious life, but eventually returned to teaching.

Molly was raised on a grain farm in Bellflower and attended the University of Illinois, earning a bachelor’s degree in agriculture education in 2002. She taught theology at The High School of Saint Thomas More in Champaign for three years and then went back to school to earn a degree in theology from the John Paul II Institute in Washington, D.C.

She would return to central Illinois to teach at Peoria Notre Dame and The High School of Saint Thomas More.

Their paths finally crossed at a classical Catholic school conference last summer and they were engaged on Easter Sunday this year.

They said they would recommend the “sposi novelli” blessing to other couples, noting that even though they had never met anyone there, it still felt like they all knew each other.

“It’s something we’ll always remember,” John said. “We placed ourselves in the heart of the church, where we were surrounded by other couples, other pilgrims, so we could meet Christ.”