The only sin that can’t be forgiven is our own refusal to have the sin forgiven, a missionary of mercy said in the Diocese of Peoria on Aug. 20.

“There is no sin beyond the salvific power of Jesus Christ,” said Archabbot Lambert Reilly, OSB, who guided St. Meinrad Archabbey in southern Indiana from 1995 to 2004 and is one of 125 priests in the United States chosen by Pope Francis to be a missionary of mercy during the Holy Year of Mercy.

Archabbot Lambert, 83, a popular retreat master well known in the Diocese of Peoria — where he formerly served as a consultant to the Office of Education — was back in the diocese the weekend of Aug. 20-21 for several presentations on God’s mercy.

“The Lord will never not forgive, and this is what we all have to learn,” he told a gathering of the diocese’s permanent deacons on Aug. 20 at the Spalding Pastoral Center in Peoria. Later in the weekend he would speak at both St. Jude Parish in Peoria and St. Edward Parish in Chillicothe.

To the deacons, Archabbot Lambert said it is important to acknowledge our own sinfulness. He called sin “the universal disease,” noting that even Mother Teresa’s Missionaries of Charity — to whom he has been a frequent retreat master — take part in the sacrament of reconciliation every eight days. 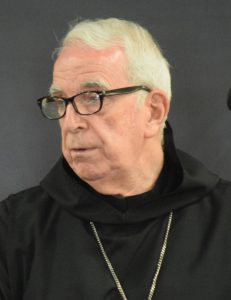 “The Lord will never not forgive, and this is what we all have to learn.” — Archabbot Lambert Reilly, OSB

“We have to know we are sinners like everyone else, and until we know that we will never know what mercy is,” said Archabbot Lambert.

Why? Because sin can be “a passport into Christ’s presence” if awareness of our own sinfulness leads us to acknowledge our need for a savior.

“What we want to do is be disgusted with ourselves, which will lead us more and more to the merciful judgment of our Lord,” he told the deacons, who that morning had supported deacon candidates as they were instituted into the ministry of acolyte by Bishop Daniel R. Jenky, CSC, during a Mass at St. Mary’s Cathedral.  The greatest saints in the church, he said — citing St Paul and St. Augustine among many examples — “look at themselves not only as sinners, but as the worst sinners.”

Only once we experience God’s mercy, which is “ready to forgive anything any number of times,” can we extend that mercy to others. And that’s what Pope Francis says the Year of Mercy is all about, said Archabbot Lambert.

“WE ALL HAVE DETOURS”

Archabbot Lambert used personal stories, humor, and a conversational tone to make his points. Sharing how his life was shaped by the death of his father at an early age, he cautioned against judging others because we don’t know their back stories.

“We’re on a journey,” he told the deacons. “We all have detours. We go this way and that way.”

Still, God loves each of us “as if there is no one else to love” and Jesus saves his harshest words not for great sinners but for “the hypocrites, those who think they’re better than everyone else.”

Noting he prayed for convicted serial killer John Wayne Gacy daily for decades after learning of his grisly actions in the Chicago area in the late 1970s, Archabbot Lambert asked that Catholics pray for those who suffer because of their sins.

“We want to free the sinners from their burdens,” he said. “And the only way we can do that is by recognizing who we are.”