Three days after the world celebrates the canonization of Mother Teresa on Sept. 4, the staff of The Catholic Post will pause to mark 20 years since the death of our beloved Father Peters. 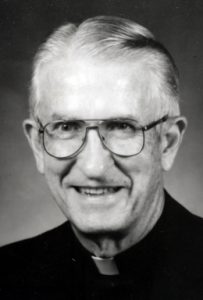 We invite readers to join us in prayer for Msgr. Robert G. Peters, a legend in the Catholic press who guided the newspaper of the Diocese of Peoria as editor and later publisher for nearly five decades.

Named a monsignor in 1950, he was always “Father Peters” to his family at The Catholic Post and its predecessor, The Register. To his close friends he was simply “Pete.” While not the founding editor, he will always be considered the father of this newspaper, which he served as editor from 1944 to 1982, as publisher and business manager until 1992, and as consultant until his death on Sept. 7, 1996.

His weekly column, Ramblin’, was a fixture on these pages for decades. Blessed with a brilliant mind, he was a pioneer of new technology in the service of the church, bringing not only The Catholic Post but much of Catholic press into the computer age. His service to the diocese included being master of ceremonies for four bishops, and chaplain of St. Joseph’s Home in Peoria for 52 years.

As tall and lanky as Mother Teresa was diminutive, Msgr. Peters was a giant in our diocesan priesthood. But he was never too busy to make a fuss over a staff member’s new baby, offer fatherly advice, or mentor a new reporter.  Please join us in a prayer of thanksgiving, and that Father Peters is receiving the reward for his labors. — Thomas J. Dermody