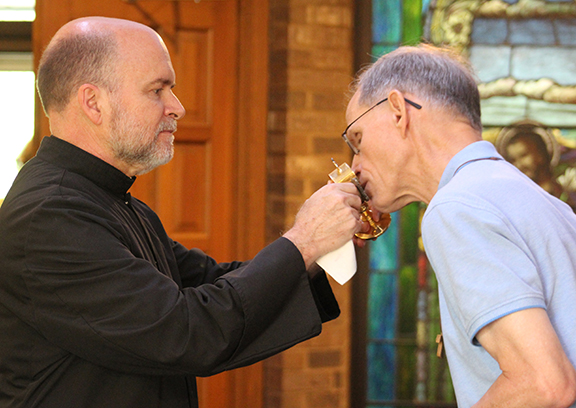 WEST PEORIA — When parish respect life coordinators come together each August, they usually are ready to hit the ground running. This year they were asked to slow down, however, and spend time reflecting on the love and the mercy of God.

“We wanted to give this day to you as a gift of appreciation for all you do as parish pro-life representatives,” said Father William Miller, IC, before he celebrated Mass for the 45 people gathered in the chapel of Immaculate Conception Convent on Aug. 20. 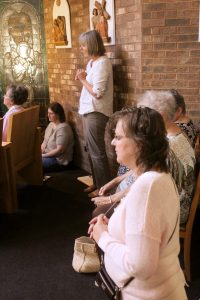 Parish respect life representatives came to West Peoria from as far as Macomb, Nauvoo, Urbana and Galesburg to pray and reflect on God’s mercy. (The Catholic Post/Jennifer Willems)

“So this Mass is offered for your intentions and for all the pro-life reps who could not be with us this morning, that we might be spiritually refreshed and renewed, and that we might receive God’s mercy and be instruments of his Divine Mercy,” said Father Miller, who chairs the Diocesan Respect Life Board.

“Moved by Mercy” was the theme for the day, which continued at Rosmini House, just across Heading Avenue from the Franciscan motherhouse. Father Miller offered two guided meditations — one during eucharistic adoration and the other during the rosary.

Sister Ana Pia reminded them that prayer is essential to what they do or it would be considered social work.

“For us to have truly grace-filled ministry it has to be backed up with prayer,” she said. “We wanted to begin with a day of reflection so that we can center on God and God can lead us to everything that he desires us to participate in for the good of life.”

Sister Ana Pia warned them that many things are coming that will require people of faith to remain strong and stand with God, including assisted suicide.

“One of the acts of mercy is to educate. God has blessed you all with this great gift of having to educate others,” she said.

“It’s so beautiful to be here and be fed by Christ because it’s only through him that we’re going to be able to triumph,” Soñé said.

The day ended with a brief planning session for October’s respect life activities by region.

During his homily, Father Miller urged the respect life representatives to guard against the prevailing sentiment that if everyone is nice, everything will be fine. This often means that we must be willing to sacrifice the truth. 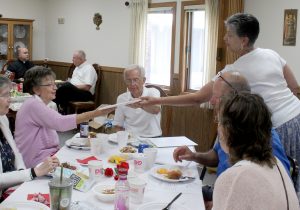 Cecilia Soñé presents a packet with the Respect Life Program materials of the U.S. Conference of Catholic Bishops and local respect life activities to Mary Ann Schrader of Immaculate Conception in Monmouth. (The Catholic Post/Jennifer Willems)

“The niceness of the world, which has the father of lies behind it, is a niceness which says, ‘Nothing matters. Nothing is true. Nothing is worth living for. Nothing is worth dying for. Just everybody be nice,’” he explained, noting that this is actually tyranny — the tyranny of relativism.

Followers of Christ are not forced to make a choice between the kindness and truth God promises, according to Father Miller.

“We are called to be kind and to be truthful — to speak the truth in kindness and to do so because it is the One who speaks the truth who shows us how to do this,” he said.

Speaking the truth is vital so people don’t have to find out the hard way the terrible burden it is to disregard, disrespect and destroy human life and the suffering that comes from it, he said.

“But for those who are already wounded, we are called to be there, to show that we are not pointing a finger, but we are helping them to carry a burden because nothing is beyond God’s mercy,” Father Miller told them.

Later in the morning he said that being a faithful follower of Christ and a missionary of the Gospel of Life and the Gospel of Mercy would come at a cost. Father Miller urged his listeners to use the “gift of memory” to remember what God has done for us so we will be able to look forward.

And don’t forget the “gift of hope,” he said. “This helps us to wait upon the Lord, trusting in his timetable instead of our own.”