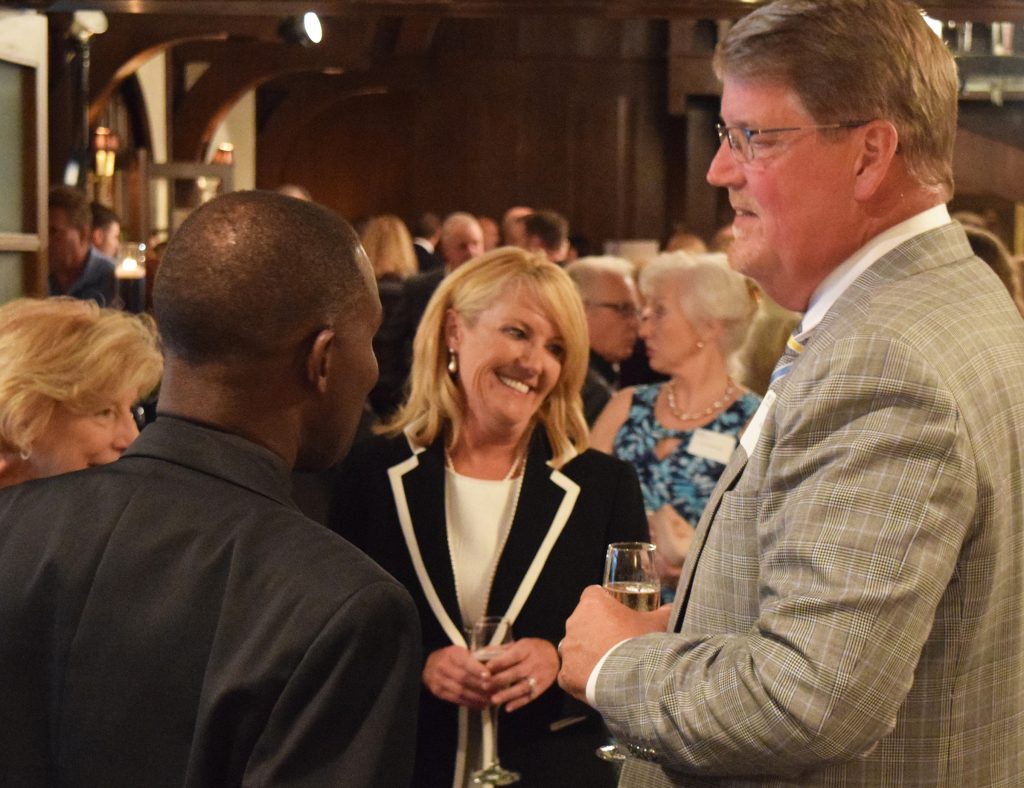 Mark and Jeannette Kleine of Galesburg visit with Father Deus-Dedit Byabato , chaplain of OSF St. Mary Medical Center in Galesburg, at a reception Aug. 15 following the announcement of their $1.5 million gift to establish a pediatric wellness center at the medical center. (The Catholic Post/Tom Dermody)

GALESBURG — Within the word “gift” is the shorter word “if,” and it was after considering the question “What if?” that Mark and Jeannette Kleine decided to make a $1.5 million investment in the future of children’s health in the Galesburg region.

The Kleines’ legacy gift to the OSF HealthCare Foundation, announced during a reception at Soangetaha Country Club on Aug. 15, will result in the creation of The Mark and Jeannette Kleine Pediatric Wellness Center at OSF St. Mary Medical Center in Galesburg.

“Jeannette and I strongly believe the children of our community are our future and providing the health care they need to flourish is critical,” said Mark Kleine in remarks at the reception. 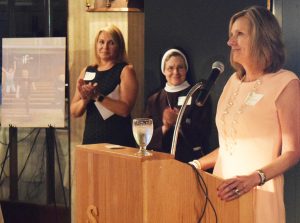 Roxanna Crosser, president of OSF St. Mary Medical Center, announces the Kleines’ $1.5 million gift. Joining in the applause are Sister Judith Ann Duvall, OSF, major superior of the Sisters of the Third Order of St. Francis, and Linda Hawkins, a director of philanthropy with the OSF HealthCare Foundation. (The Catholic Post/Tom Dermody)

The Kleines own and operate the Kleine Companies, based in Galesburg.

The pediatric wellness center to bear the Kleines’ name will “help children have a healthier and happier life in Galesburg,” said Roxanna Crosser, president of OSF St. Mary Medical Center, expressing gratitude to the couple.

Development of specific programs and services to be offered through the center is under way in a partnership between  OSF St. Mary Medical Center, OSF Galesburg Clinic, and the Children’s Hospital of Illinois at OSF Saint Francis Medical Center in Peoria.

“It’s a dream, a vision in their heart, and they want to bring it to reality,” said Sister Judith Ann Duvall, OSF, major superior of the Sisters of the Third Order of St. Francis and chairperson of the OSF HealthCare Board of Directors, of the Kleines’ generosity and interest in children’s health. “We are thrilled and privileged to have them as our partners to bring that precious gift to this community.”

The announcement of the gift was made by Crosser.

“This gift will help many,” she predicted, noting the Kleines are “passionate about what they believe in” and it is obvious they love children, the community, and OSF.

More than a year ago, Crosser and Linda Hawkins, a director of philanthropy with the OSF HealthCare Foundation, asked the Kleines to chair a group exploring philanthropic needs. The group’s efforts, around the theme of “The Gift,” sought to redefine the culture of giving and work to ensure the future of quality health care in Galesburg.

“Mark and Jeannette pushed this group to an incredible height of what could be done in Galesburg,” said Crosser.

Tom Hammerton, president of the OSF HealthCare Foundation, said the committee’s work on enhancing the culture of philanthropy will be felt “throughout the OSF health care geography and the people who are served.”

In his remarks, Mark Kleine defined “The Gift” in several ways, ultimately being “the gift of life.”

Tears welled up as he thanked their children, grandchildren and parents for their “wisdom, understanding and love.”

“We would like to thank God for giving us the direction, passion, resources and love to do what we do,” he said.

Also speaking was Dr. Divya Joshi, CEO of the OSF HealthCare Children’s Service Line, who called behavioral health and wellness the two greatest needs for children in Galesburg, and said those are the on which the project will focus. Matt and Carrie Hawkinson shared a personal tribute to OSF medical personnel in both Galesburg and Peoria for the care given to their son, Andrew, during a recent illness.