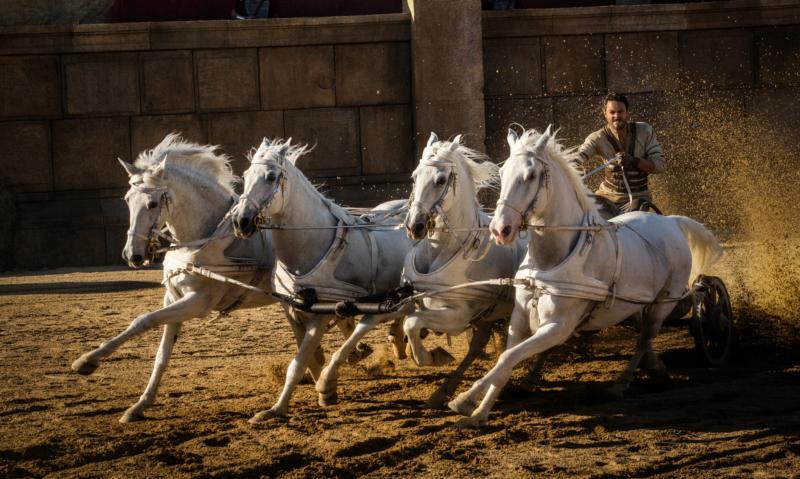 Though reasonably satisfying as an action picture, this iteration of Lew Wallace’s 1880 novel suffers from a poorly written script that fails to convince when the classic story’s religious theme comes to the fore.

First-century Jewish prince Judah Ben-Hur (Jack Huston) lives a prosperous life in Jerusalem where he carries on a friendly rivalry with his Roman adopted brother (Toby Kebbell), and finds marital happiness with his true love (Nazanin Boniadi). But after he gives shelter to a young zealot (Moises Arias) who was wounded fighting against foreign rule — personified by Pontius Pilate (Pilou Asbaek) — disaster strikes. So, too, does betrayal since his foster sibling, now an influential army officer, refuses to risk his career by helping the family that took him in as a child. Consigned to the miserable existence of a galley slave, Judah thirsts for revenge until multiple encounters with Jesus (Rodrigo Santoro) open his eyes to the value of forgiveness and reconciliation.

While aficionados of the 1959 version may find such scenes as the epic sea battle and the trademark chariot race lacking, considered strictly on their own they work well enough. But director Timur Bekmambetov and screenwriters Keith Clarke and John Ridley skimp on the careful and time-consuming character development that would have been needed to make the protagonist’s ultimate conversion believable.

Probably acceptable for older teens. Generally stylized but harsh violence with several grisly deaths and some gore, a nongraphic marital bedroom scene. The Catholic News Service classification is A-III — adults. The Motion Picture Association of America rating is PG-13 — parents strongly cautioned. Some material may be inappropriate for children under 13.