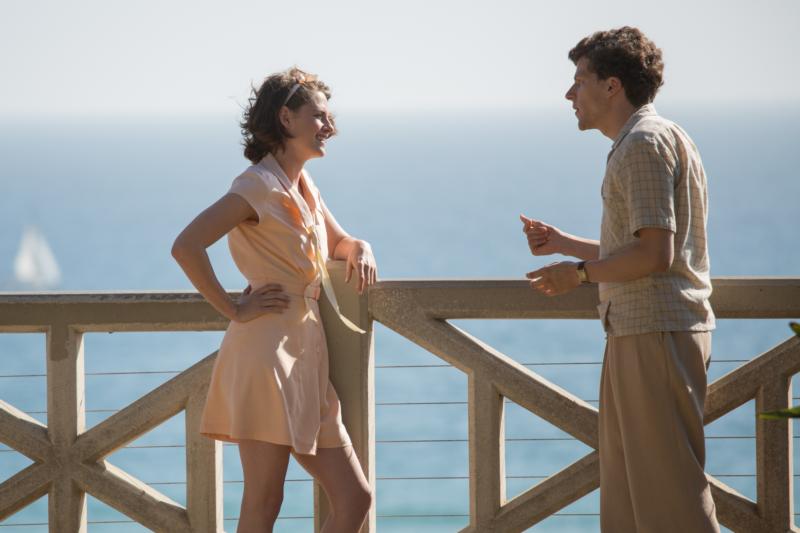 Kristen Stewart and Jesse Eisenberg star in a scene from the movie "Cafe Society." The Catholic News Service classification is A-III -- adults. (CNS/Lionsgate)

Writer-director Woody Allen’s seriocomic look at romance follows a Depression-era Bronx lad (Jesse Eisenberg) to Los Angeles, where he gets a job with his uncle (Steve Carell), a powerful Hollywood agent. But when his relationship with the agent’s lissome secretary (Kristen Stewart) leads to disillusionment, he returns to New York to manage a new nightclub owned by his gangster brother (Corey Stoll). There a whirl of glamorous nightlife culminates in his marriage to a shimmering blond heiress (Blake Lively).

The characters on offer in this nostalgic tale are all one-dimensional archetypes. Sincerity, moreover, gives way to the Allen’s one-liners, and no one becomes any wiser for their experiences. Lost amid the trademark humor is any sustained, serious engagement with topics like marital fidelity.

Bloodless gun violence, mature themes, including adultery and prostitution, a drug reference, several uses of profanity, at least one crude term. The Catholic News Service classification is A-III — adults. The Motion Picture Association of America rating is PG-13 — parents strongly cautioned. Some material may be inappropriate for children under 13.