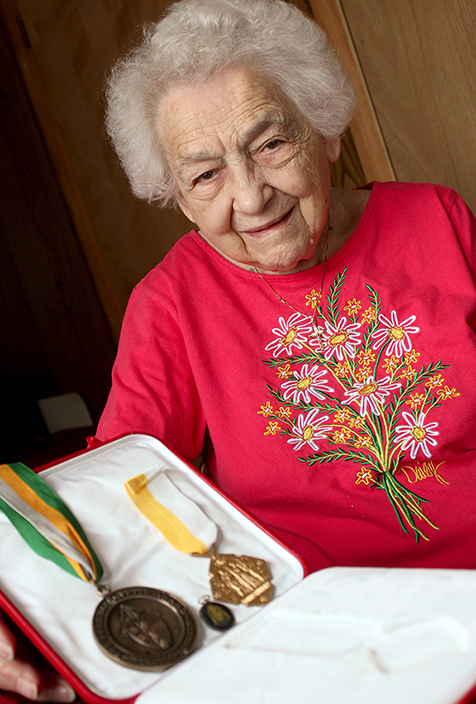 Dorothy Naumann's long and dedicated service to St. Patrick Parish in Elmwood has been recognized with both diocesan and papal honors. (The Catholic Post/Jennifer Willems)

YATES CITY — It’s only two miles between Dorothy Naumann’s house and the office at St. Patrick Church in Elmwood. It’s a path her car knows well — she’s been traveling it for the last 57 years as the parish secretary.

Now her car will have new roads to explore. At 90, Mrs. Naumann has filed her last year-end report at St. Patrick and is moving into assisted living in Canton.

It will be quite a switch for the woman who also served as director of religious education at St. Patrick for 40 years, as well as lector and extraordinary minister of holy Communion.

And she was secretary to the principal at Yates City School for 19 of those years.

“I had to be busy,” Mrs. Naumann told The Catholic Post. “I can’t sit around and do nothing. I want to be busy.”

“I just liked working with the people and the kids and for Father. It was something I had to do.”

All of that “busy” didn’t go unnoticed. She received the Pro Ecclesiae et Pontifice (For the Church and the Pontiff) medal from Pope John Paul II in 1993, at the request of Bishop John J. Myers. Five years later she would be honored with the Pere Marquette award — the highest recognition bestowed by the Diocese of Peoria — for her service to the church.

She didn’t do it for the honors, though.

“I just liked working with the people and the kids and for Father. It was something I had to do,” she said simply.

Mrs. Naumann grew up on a farm seven miles north of Chillicothe. Her home parish was St. Edward, but she said they didn’t go regularly.

“My father wasn’t Catholic. My mother was, but it was Depression time and there wasn’t much money and the roads weren’t that good,” she recalled. “You just didn’t get there very often.”

Her father rented 160 acres and raised corn and hay along with his daughter and two sons. They milked four or five cows a day and had some pigs.

Sparland High School gave her the training in bookkeeping that would take her so far in life. It was while she was working in the Farm Bureau office in Henry that she met her husband, Paul, a railroad man who served in the Navy during World War II. They were married in September 1945, after he received a medical discharge. 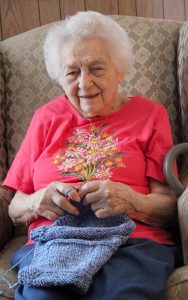 Because his job required travel, they settled in centrally located Yates City. Their two sons, Allan and Robert, were raised in the house they bought in 1951 and served as the site for so many holiday meals for their growing family, which now includes five grandchildren and 11 great-grandchildren.

“They’re great,” she says with a smile.

After Mrs. Naumann lost her husband in 1973, she went to work for her brother in Henry for four years. She would go on to work at Yates City School until she was 70.

She augmented that by taking night classes in Bradford and surrounding communities, noting, “There were no programs then. You had to write your own programs.”

Eventually she bought a computer for her own use and that was how the Elmwood church moved into the new technology.

When she started “helping out” at St. Patrick, Mrs. Naumann did the bookkeeping and typed the bulletins for Father Daniel Sheehan, a Rosminian priest who pastored the parish for 40 years. Eventually she was doing the annual reports and more by computer and took it in stride.

“I just do what needs to be done,” she said. That included directing the religious education program when asked and teaching when she could.

Along the way she also served on the parish council, the board of the Diocesan Council of Catholic Women and the Diocesan Pastoral Council.

Mrs. Naumann doesn’t plan to slow down too much when she moves to Canton. She knits prayer shawls for hospice patients in Peoria and Canton and continues to make rosaries for the missions, which have received hundreds from her already.

While she will miss St. Patrick and the people there, Mrs. Naumann is ready to retire.