EAST PEORIA — With the Jubilee Year of Mercy, Pope Francis is inviting people to a new, personal encounter with Jesus not once, but every day. That doesn’t just apply to Catholics or people of good will.

“The Father’s mercy is for everyone,” according to Walter Matthews. “It is for all of humanity until the end.” 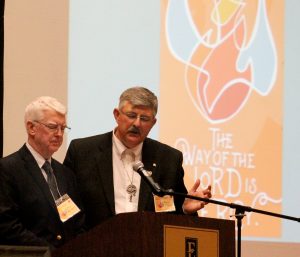 The day included a Mass celebrated by Father Tom Mizeur, pastor of Immaculate Conception in Lacon and St. John XXIII in Henry, and culminated with a healing service.

The theme was “The Way of the Lord is Mercy.”

A WAY OF LIFE

Matthews, along with keynote speaker Barbara Lanzdorf-Heil and musician Dan Dúet, encouraged participants to trust that the Lord loves them without measure and wants them to use their gifts to change the world.

He encouraged them to adopt a spirit of humility, to recognize that everything comes from God, and then to ask for God’s mercy and forgiveness. “There are no conditions for this beyond repentance.”

Once we have experienced mercy, we must extend it to others and make this a way of life, he added. That requires prayer — being disposed to listen to the word of God and being renewed continually in the Spirit – as well as compassion.

“Jesus’ mercy overcomes every barrier . . . and places us in direct contact with the other,” Matthews said, noting that a hallmark of Pope Francis’ ministry has been to call us to a “culture of encounter.”

Lanzdorf-Heil’s life has been devoted to helping people encounter the Lord. For many years she did that as a Protestant minister trying to “win Catholics.” 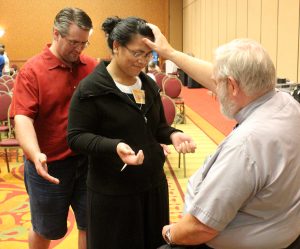 Father Tom Mizeur traces the sign of the cross in blessing and prayer on the forehead of Sia Key, who is in formation with the Daughters of St. Francis of Assisi in Lacon. The healing service culminated the 30th annual Charismatic Renewal Conference on July 30. (The Catholic Post/Jennifer Willems)

She eventually “read my way into the church” through the writings of St. Teresa of Avila and St. Catherine of Siena and other doctors of the church. When she attended her first Mass and encountered Jesus resting in a monstrance placed before her, all she could do was bow.

She attended the Archbishop Harry J. Flynn Catechetical Institute in St. Paul, Minnesota, where she met Jeff Cavins and recognized a kindred spirit. When she confided her struggle to give up everything she knew to enter the Catholic Church he told her, “I would hate to think that when the Bridegroom is calling you into deep intimacy with him you told him, ‘I have better things to do.’”

She was confirmed in 2013 and warned conference participants that she still speaks Catholic “with a Protestant accent.”

Lanzdorf-Heil, who had little religious instruction growing up, later found out that she had been baptized Catholic because her “meddling” great-grandmother had pressured her mother to do so. She gave everyone present permission to “meddle” in the lives of their grandchildren and great-grandchildren if they are not yet baptized and challenged them to be brave enough to engage those who are struggling like she had if the opportunity presents itself.

“You have access to a banquet” prepared by God, she said. “It’s not psychology that changes us, it’s him.”