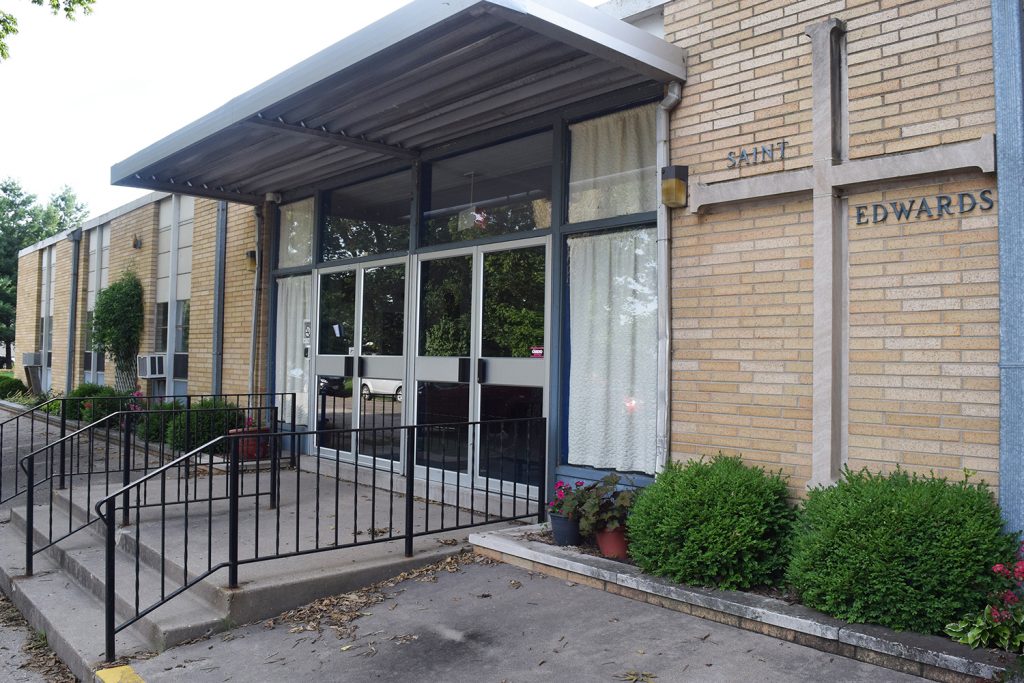 More than $440,000 has been pledged in just three days in an effort to save St. Edward School in Chillicothe from closing because of costly needed repairs. (The Catholic Post/Tom Dermody)

CHILLICOTHE — A weekend announcement that St. Edward School in Chillicothe is closing because of extensive repair costs resulting from a leaky roof has set off a wave of prayer and charity in hopes of saving the 56-year-old elementary school.

“It has been amazing to see our parish and community rally behind our wonderful school,” wrote Father Keith Walder, pastor, in a letter to parishioners and school families Tuesday night after a goal of more than $400,000 in pledged donations was surpassed in just three days of frantic fundraising.

Father Walder emphasized that in order to assure the school will be re-opened this fall, the pledges have to turn into cash-on-hand at the parish by a deadline of noon on Friday, July 29. 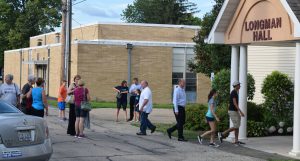 After praying the rosary in church Monday night, members of St. Edward Parish enter Longman Hall for a meeting on an announced closing of the parish school. (The Catholic Post/Tom Dermody)

“Only when we have received the full $400,000 in cash donations will I be able to sign contracts for repairs,” wrote Father Walder. The very short timeline is necessary “in order to give our parents clarity and peace of mind that the school will be re-opened and we can begin registering students.”

Because of the outpouring of support, the pastor’s July 26 letter had a markedly different tone than the news that shocked the parish last weekend.

“After extensive discussion, with truly a heavy heart both for all of us and the Diocese, it has been decided that St. Edward School and Pre-School will close, effective immediately,” Father Walder announced through a letter dated July 23 and repeated at weekend Masses. The news stunned the parish and community just three weeks a scheduled school re-opening.

“Certainly it’s not ideal to make this announcement in late July,” acknowledged Father Walder, adding it was necessitated by a just-received insurance report.

That report declared the building unsuitable until repairs are made at an estimated cost of nearly $600,000. An inspection revealed that — in addition to replacing the roof and repairing resulting extensive damage — the work must include asbestos abatement of damaged ceiling tiles, swelling costs well beyond the resources of the parish, which is paying off an $80,000 debt.

Told by diocesan officials last Sunday that $400,000 in hands-on cash would have to be raised within a week in order to generate contracts for any possible repair, the parish and school community rallied in what some are calling a miraculous way.

As of Wednesday morning, a Go Fund Me account set up by a 19-year-old alumnus of St. Edward School had registered $441,845 in pledges. Social media spread the invitation far, including to parish and school alumni.

“I think it’s remarkable,” said Gino Grivetti, a 2015 Peoria Notre Dame High School graduate and now a business management student at Quincy University. Pledges, he said, have ranged from $5 to $20,000 and include individual contributions as well as from groups such as the school parents club and the local Knights of Columbus council.

Grivetti said those who have pledged are now being contacted to remind them to quickly get the money to the parish rectory. Diocesan officials have also stressed that persons considering supporting the effort should immediately send donations to St. Edward Parish, 1216 N. 6th St., Chillicothe, IL 61523. The parish phone number is (309) 274-3809.

“They love the place,” said Mike Domico, principal, of the parish and school community as well as the surrounding area. “You can see that with the outpouring of what’s going on here.” Area businesses, he said, have lined up to host nightly fundraisers.

Should the money be successfully collected by Friday, it will be augmented by a $200,000 loan from the diocese. But questions would still remain for the school, which expected an enrollment of about 120 in pre-K through eighth grade.

“There is some frustration because we can’t give some definitive answers,” said Domico, citing a likely late start and the need to find space should a successful campaign mean the school reopens. He credited diocesan officials including Patricia Gibson, chancellor, and Dr. Sharon Weiss, superintendent of schools, for their insights and guidance.

Prior to the “whirlwind week,” Father Walder acknowledged the decisions leading to a school closure “weighed heavy on my heart.”

“I regret that that this causes great stress to our school families and our whole parish,” he wrote in his weekend announcement. The letter went into depth about the financial background of the school, whose budgetary needs require nearly 66 percent of annual parish donations. 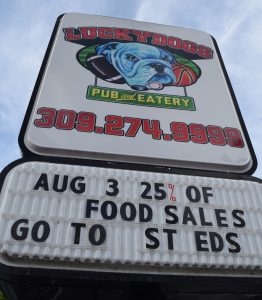 “Through joining together in a spirit of prayer, understanding, and acceptance we will be comforted and sustained,” he wrote.

Parishioners gathered in St. Edward Church prior to Monday evening’s two-hour meeting in the parish hall to pray the rosary.

Now Father Walder, Domico, Grivetti and the parish and school community have a higher goal.

“We’re really hopeful we’ll get the whole thing,” said Domico, meaning that efforts are successful in raising the full $600,000 to cover all costs. “Wouldn’t that be wonderful? Any penny helps. What a testimony to the school community and the community itself.”

“Never in our wildest dreams did we think the parishioners and community would so quickly respond,” wrote Father Walder. “All of this has demonstrated your love for the school and its importance to the community.

In offering his “profound gratitude,” Father Walder added the hope “that even more people will step up and make a donation to meet the full cost of the repairs. Any amount is welcome.”

“The Diocese is committed to assisting us in opening our school this fall,” wrote Father Walder. “I am confident that we will exceed our goal, get our kids registered, get our school fixed, and get back to the business of educating our youth and passing on the faith.”

St. Edward School was opened in 1960 with four grades. By 1963, the school included all eight grades.