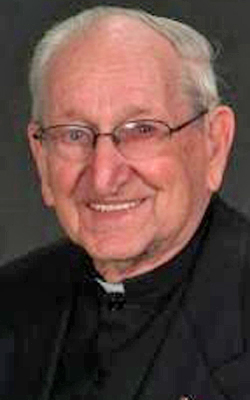 ATKINSON — A Mass of Christian Burial was celebrated on July 21 at St. Anthony Church for Father Gerard A. Verhoye, the priest with the most seniority in the Diocese of Peoria.

Father Verhoye died on July 18, 2016, at WoodRidge Supportive Living in Geneseo. He was 94.

The son of Charles Verhoye of Ruiselede, Belgium, and Bertha Van Poucke of Kaster, Belgium, Father Verhoye was born on March 22, 1922, in Moline. He attended Sacred Heart Grade School and High School in Moline and the former St. Joseph High School in Rock Island, graduating in 1941.

He went on to St. Bede College in Peru, where he studied philosophy and earned a bachelor’s degree in ethics in 1945. He studied theology at St. Paul Seminary in St. Paul, Minnesota, completing his work early due to an accelerated program during World War II.

Father Verhoye was ordained by Bishop Joseph H. Schlarman on March 19, 1949, in the chapel of the bishop’s residence in Peoria — the only member of his class.

“We have a class reunion every day,” he told The Catholic Post in 2009, when he celebrated his 60th anniversary.

Father Verhoye served as parochial vicar at St. Malachy in Geneseo, St. Joseph in Rock Island, St. Anthony in Atkinson and St. Joseph in LaSalle before being named chaplain at Mercy Hospital in Urbana (now Presence Covenant Medical Center) in 1955.

He was parochial vicar and then administrator at Immaculate Conception in Monmouth from 1959 to 1961, when he went to St. John the Evangelist Parish in Galva as pastor. During his 10 years there he oversaw construction of a new church and parish hall.

His next assignment took him to St. Patrick in Sheffield, where he oversaw renovations to the church. While remaining administrator there, he was named pastor of St. Anthony in Atkinson and St. Mary in Hooppole in 1976 and would continue to serve those faith communities until he was granted senior status in 1992.

“I always wanted to be a priest. The vocation, the desire was always there,” Father Verhoye told The Post when he celebrated his 60th anniversary of ordination, and he called that vocation “my greatest gift.”

“I enjoyed every minute of it,” he would say of his priesthood five years later.

Preceded in death by his parents and one sister, Margaret Roland, Father Verhoye is survived by two nieces, Lisa Roland of Ashland, Oregon, and Dana Cole of Tucson, Arizona.