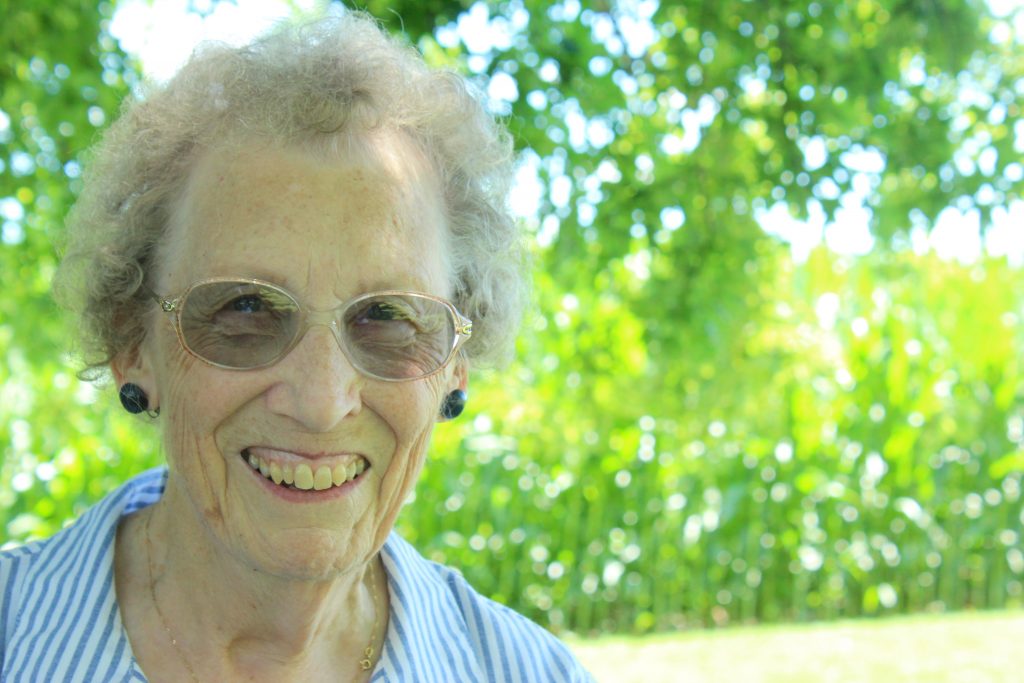 Mary Wiesbrock of rural Streator stands on the farm she has called home for all of her 91 years. (The Catholic Post/Jennifer Willems)

STREATOR — From her kitchen window, Mary Wiesbrock can see the fields of beans and corn on the farm she has called home for all of her 91 years. Also visible is Lostlands Cemetery, which is located down the road on land donated by her great-grandfather, Patrick Whalen.

From her kitchen table, Mrs. Wiesbrock writes about her world. The poems that flow from her pen and onto paper — no computers here — speak of truths and a faith that provide food for thought about life on and off the farm.

“Sometimes they come very easily and sometimes I think, ‘There should be a different ending,’” said the woman who didn’t start writing until she was 90. When she’s satisfied with what is on one of her scratchpads, she writes it down in a notebook with the others.

That isn’t the only evidence of her fertile imagination, though. 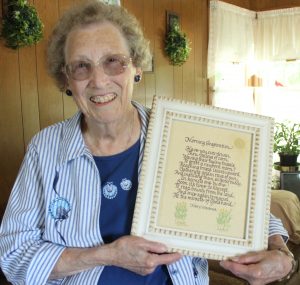 Mrs. Wiesbrock’s work is published on a regular basis in The Times, which covers Ottawa and Streator, and she has received clippings from her fans. One wrote out their favorite, “Morning Inspiration,” in calligraphy and framed it for her. It now hangs on the wall in her dining room.

The poem paints a picture of “valleys of green corn, waving their tawny tassels to greet a newborn morn.” As many of her verses do, it ends with words of praise: “Soon it’s time to harvest, to reap the bounty from the land, and once again to marvel, at the miracle of God’s hand!”

Another pays tribute to those who work the land. She said they used to be called “dumb farmers” but nothing could be further from the truth.

“Today we are scientists, chemists, mathematicians, mechanics, inventors, marketing experts, geneticists and laborers, to name a few,” she said in the introduction to “Kudos to the Farmer.” (See the text below.)

She said it can be an unpredictable life, but continues to rely on the Lord. “I wouldn’t want any other,” she said.

A lifetime member of Annunciation BVM Parish in Eagle Township, Mrs. Wiesbrock has attended Sts. Peter and Paul in Leonore and worked with the St. Anne’s Sodality there since Annunciation closed. She said the transition hasn’t been too difficult since her father’s and husband’s families both came from the Leonore parish.

“But when I get to the corner, the car still wants to go south (toward Annunciation) when I’m going to church,” she said with a laugh.

Mrs. Wiesbrock has cared for the family home since she was 15. Her mother had multiple sclerosis, so she stayed to help her parents after she married Wilfred Wiesbrock.

Her father, Ervin Schmitt, took care of the farm until he died in 1984. She hired a tenant farmer, who ran the place for 20 years, and now works with Darren Walter of Grand Ridge. After all these years she’s still learning.

“I’m more involved now than I have ever been,” she told The Catholic Post. “I have ridden in the planter in the spring when they were doing the corn. . . . When they combine the corn and beans I usually go out and ride a couple rounds of each.”

She also rode in the semi with Walter when he took corn to the terminal in Utica and explained the process to her.

Her busy life includes keeping up with two sons, two daughters, 16 grandchildren and 36 great-grandchildren. One of her sons, Bill, is the manager of her 158-acre farm and her daughter lives next door.

A longtime volunteer at St. Mary’s Hospital in Streator, Mrs. Wiesbrock was involved in the hospital auxiliary and served on the board. She also worked in the hospice program for 20 years. Her efforts on behalf of the church and her community were recognized with the Pere Marquette Award from the Diocese of Peoria in 2003.

Now Mrs. Wiesbrock is being called to serve again. She recently was scheduled to go to the new OSF Center for Health – Streator to learn about volunteering at the front desk.

“I’ve been involved since the word ‘go.’ That’s just the way I am,” she said. “You keep involved and keep going. Keep active — that’s the thing. Keep involved with people.”

KUDOS TO THE FARMER — by Mary Wiesbrock

Black and tan lays the land

As it waits the farmer’s hand.

To test the soil and fertilize

He must be learned and very wise!

To turn it up and work it over

Seed it down with grains and clover!

For if the balance isn’t right

The seeds will hide, not seek the light!

Then Mother Nature is the key

To his success and sanity.

Too little or too much rain

If crops are good the price goes down

But expenses stand their ground.

Yes, farming is the greatest risk

Yet each year he still persists

And every year he starts anew

Trusting God to see him through!