“If God calls us . . .”: Diocese of Peoria celebrates its jubilarian priests 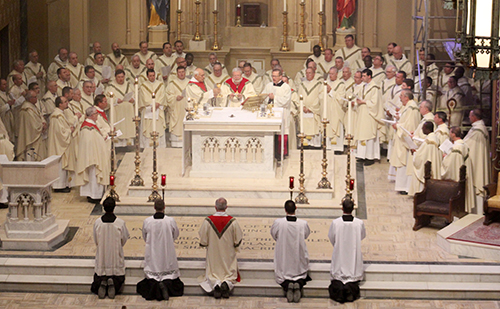 Priests from throughout the Diocese of Peoria concelebrate the Jubilarian Mass with Bishop Jenky on June 23 at St. Mary's Cathedral in Peoria. (The Catholic Post/Jennifer Willems)

Applause filled St. Mary’s Cathedral in Peoria as priests celebrating milestone anniversaries were honored at a Mass celebrated by Bishop Daniel R. Jenky, CSC. Praising their commitment, he called them “irreplaceable in the life of our community” and said, “Our hearts are filled with love and gratitude for their ministry.”

Also honored was the newest priest of the Diocese of Peoria, Father Michael Pica, who was ordained on May 28. 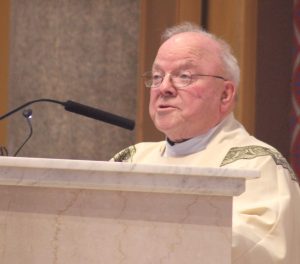 The homilist was Msgr. Ernest Pizzamiglio, a golden jubilarian and pastor of Immaculate Heart of Mary Parish in Galesburg. (The Catholic Post/Jennifer Willems)

Showing support for all of them were the permanent deacons, consecrated women and laity who attended the June 23 liturgy. Following Mass, the celebration continued with a dinner for the clergy at the nearby Spalding Pastoral Center.

The homilist for this year’s gathering was Msgr. Ernest Pizzamiglio, pastor of Immaculate Heart of Mary in Galesburg, who observed the 50th anniversary of his ordination on May 22. In a talk filled with humor, he recounted his struggles with academic life and how he kept going, knowing “if God calls us to anything, then no one nor anything will ever prevent it from happening.”

That confidence started with a blunt conversation with God after Msgr. Pizzamiglio heard the call to priesthood.

“I seriously thought that he made a mistake,” the golden jubilarian said. “I responded, ‘O Lord God, I don’t know how to speak. I am too dumb.’”

“Say not that ‘I am too dumb,’” God responded, according to Msgr. Pizzamiglio. “To whomever I send you, you shall go, and whatever I command you, you shall speak. Have no fear, because I am with you.”

Those words sustained the man standing at the cathedral’s ambo when he was told, for example, that preaching was hard and he would probably have trouble with it.

“I was not discouraged,” he said, replying with faith, “I believe God called me to the priesthood and he will always give me what I need.”

When the seminary rector told Msgr. Pizzamiglio he had no vocation to teach or leadership ability, “I thought it was reverse psychology,” he said, drawing laughter from his fellow priests.

Bishop John B. Franz kept sending him back to the seminary, however, and “God gave me what I needed to persevere to the end.”

Msgr. Pizzamiglio said he hoped his homily would be an inspiration to anyone who is struggling.

Before the Mass ended, Msgr. Paul Showalter, vicar general and a golden jubilarian himself, recognized Father Robert Hoffmann and Father Thomas Kelly, who are celebrating 60 years of priestly ministry in 2016. 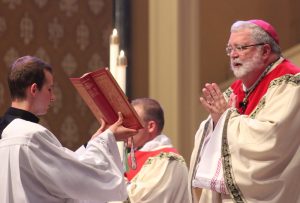 Bishop Jenky praised the commitment of the priests marking milestone years of ordination, calling them “irreplaceable in the life of our community.” (The Catholic Post/Tom Dermody)

Priests and brothers from the religious orders that have served in the Diocese of Peoria were included, as well. Among them was Brother Kevin Duckson, OFM, who recently completed nearly two decades of service at St. Mary in Bloomington, and was honored for the 50th anniversary of his religious profession.

EDITOR’S NOTE: More photos from the Jubilarian Mass have been posted to The Catholic Post’s site on Facebook.