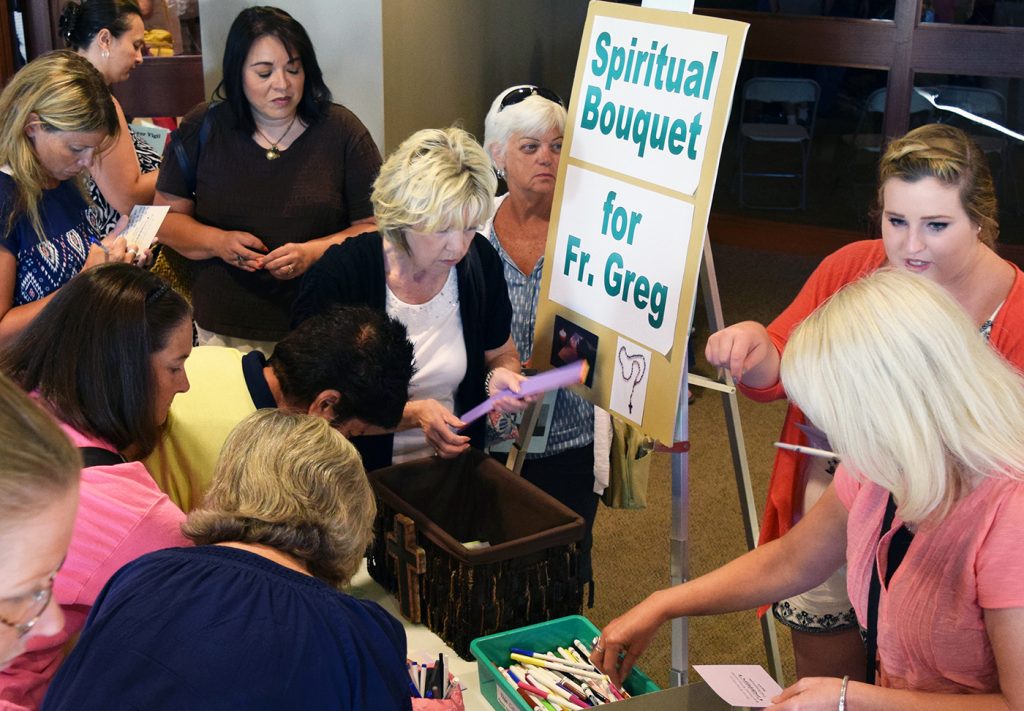 Following a prayer vigil for Msgr. Gregory Ketcham on June 21 at St. Patrick Church of Merna in Bloomington in Bloomington, concerned Catholics line up to pledge prayers for a spiritual bouquet. Msgr. Ketcham is about to begin treatment for a recently diagnosed brain tumor. (The Catholic Post/Tom Dermody)

Members of St. Patrick Church of Merna in Bloomington and St. Mary Parish, Downs, are leading a wide prayer effort as their pastor, Msgr. Gregory Ketcham, prepares to undergo treatment for a malignant brain tumor. 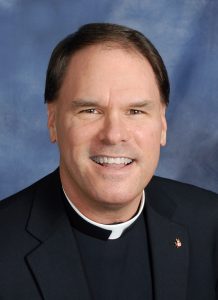 The tumor was diagnosed after Msgr. Ketcham, 49, suffered a seizure near the close of a Sunday Mass on June 12 at St. Patrick Church of Merna.

Bishop Daniel R. Jenky, CSC, has asked for prayers for Msgr. Ketcham, especially through the intercession of Venerable Fulton Sheen.

The bishop has appointed Father Dustin Schultz as administrator of the two parishes for the summer. Father Schultz is the newly named administrator of St. Patrick Parish in Wapella and chaplain of Central Catholic High School in Bloomington.

Msgr. Ketcham has expressed deep gratitude for the outpouring of support he has received since his diagnosis. On Tuesday evening, June 21, St. Patrick Church of Merna was filled for a prayer vigil seeking his restored health.   Folding chairs were set up to handle the overflow crowd.

Father Michael Pica, who was ordained May 28 and is serving as parochial vicar of St. Patrick Church of Merna and St. Mary parishes in his first assignment, led the Holy Hour that included exposition of the Blessed Sacrament, recitation of the rosary, a litany to the Sacred Heart of Jesus, and Benediction. Many of those in attendance stopped in the church’s gathering area after the service to write pledges of continued prayers as part of a spiritual bouquet being gathered for Msgr. Ketcham. 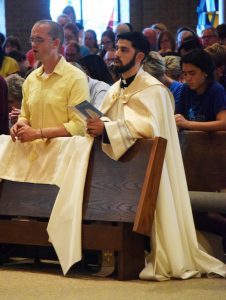 According to a June 23 update to priests of the Diocese of Peoria from Msgr. James Kruse, vicar general, Msgr. Ketcham will be admitted to MD Anderson Cancer Center in Houston, Texas, in the coming days for “aggressive treatment.” Because of the tumor’s location, surgery is not possible.

Prayer requests and concern for Msgr. Ketcham are being shared on social media throughout the diocese and beyond, especially in parishes and institutions where he has served. Photos from the June 21 prayer vigil posted on The Catholic Post’s Facebook site, for example, were shared more than 300 times for a reach of beyond 20,000.

Among the hundreds of comments and reactions to the photos was one from Kay Luft, Msgr. Ketcham’s oldest sister.

“Father Greg was so touched by the number of people who attended his prayer service and the outpouring of blessed prayers and wishes he has received during this past week,” she wrote. “Although he is not an avid follower of (Facebook), we have been keeping him updated of the postings on this site.”

She shared optimism regarding future treatment, adding more will be known in the coming days.

“Thank you again for all of your prayers and good thoughts,” said Luft. “Please continue to pray for him.”

A native of Hamilton, Msgr. Ketcham was ordained in 1994. He has been pastor of St. Patrick Church of Merna in Bloomington and St. Mary, Downs, since 2014. He is former chaplain and director of St. John’s Catholic Newman Center at the University of Illinois, and pastor of St. Philomena Parish, Peoria; Sts. Peter and Paul, Nauvoo; and Sacred Heart, Dallas City.

A former diocesan director of rural life, his first assignments were as parochial vicar of faith communities in Monmouth, Raritan, and Oquawka.

EDITOR’S NOTE: Additional photos from the June 21 prayer vigil have been posted on The Catholic Post’s Facebook site.