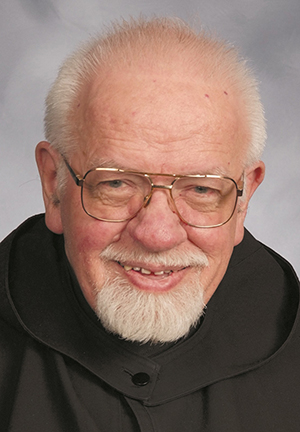 PERU — A Mass of Christian Burial was celebrated at the St. Bede Abbey Church here on June 15 for Father Gabriel (Gary) Bullock, OSB, a monk and priest of the abbey and a longtime English and religion teacher at St. Bede Academy.

Father Gabriel, a Peoria native, died on Friday, June 10, 2016, at St. Joseph Nursing Home in Lacon after an extended illness. He was 82.

His body was received at the abbey church on the afternoon of June 15. Abbot Philip Davey, OSB, of St. Bede Abbey was principal celebrant and homilist at the funeral Mass.

Born in Peoria on March 25, 1934, to Roy E. and Jane (Morris) Bullock, Father Gabriel attended St. Patrick Elementary School and was a graduate of Spalding Institute, where he was salutatorian of his class. After two years at the junior college at St. Bede, he entered the monastery novitiate in 1954, taking his solemn vows on July 11, 1955.

He was ordained a priest on May 28, 1961, by Bishop John B. Franz at St. Mary’s Cathedral in Peoria. Father Gabriel received a bachelor of arts degree in philosophy from St. John’s University and a master’s degree in English from the University of Notre Dame.

He served on the faculty of St. Bede Academy as an English and religion teacher, and as moderator of the school newspaper and the yearbook. A frequent retreat director, Father Gabriel was confessor and spiritual director to area adults as well as Academy students.

SOUL OF AN ARTIST

Father Gabriel loved the great works of literature, including the ancient Greek epics the “Illiad” and the “Odyssey.” He designed and built sets for several plays, including productions of “Macbeth” and “Othello.” Among the ways he will be remembered are for his distinctive handwriting; his catering of elaborate gourmet meals as an auction item for the Academy, and for marathon sessions for setting out the yearbook.

He is survived by siblings Dave (Carol) Bullock of East Peoria; Sue (Joe) Thierer of Peoria; Mary Beth (Fred) Roedl of Bloomington, Indiana; Paul (Marti) Bullock of Dunlap; Dan (Laura Merrill) Bullock of West Newton, Massachusetts; Theresa (Pat) Chambers of Peoria; and 20 nieces and nephews. He was preceded in death by his parents and a sister, Sharon Haney.

Interment in the abbey cemetery followed the funeral Mass.

Memorials may be directed to St. Bede Abbey.