Two priests have shared gifts of preaching, teaching for 60 years 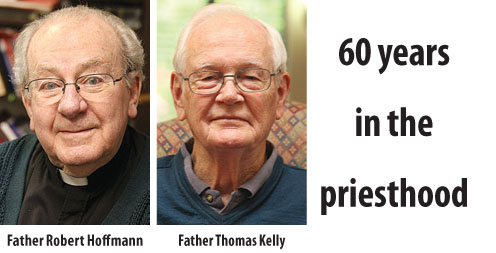 The last 60 years have seen some turbulent times in the nation and major changes in the church, but they have also provided moments of great joy for Father Robert Hoffmann and Father Thomas Kelly. In the days ahead they will gather with family and friends to celebrate all that has been and what is still to come.

Father Hoffmann is planning a Mass for next Sunday, May 29, at 2 p.m. at Holy Family Church, 444 E. Main St., in Danville. A small reception will follow.

His sister, Sinsinawa Dominican Sister Eleanor Hoffmann, who celebrated her own 60th anniversary of consecrated life two years ago, will offer a reflection.

Father Kelly’s celebration will be on Sunday, June 5, at St. Anthony Church, 2525 S. Skyway Road, in Bartonville. Father Doug Hennessy will preside at the 9 a.m. Mass and Father Kelly will be the homilist.

Coffee and doughnuts will be available after Mass.

Ordained by Bishop William E. Cousins on May 27, 1956, at St. Mary’s Cathedral in Peoria, both are now senior priests of the diocese. Father Kelly retired in 1999 and Father Hoffman followed a year later.

Brief profiles of the jubilarians follow, along with their addresses.

For Father Hoffmann, the Second Vatican Council was a turning point and the former Latin teacher embraced it with great enthusiasm.

“It just opened up all kinds of avenues of meaningfulness in liturgy and sacraments and the Eucharist itself,” he told The Catholic Post. “It was exciting.” 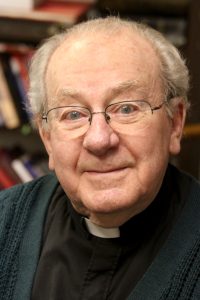 Translating the prayer language of the church from Latin to English also opened the hearts and minds of Catholics in the pews and as a result they took more responsibility for the mission of the church and its prayer life, he said.

“I think it contributed to their willingness to participate and invite other people into the church,” Father Hoffmann said.

That helped the Rite of Christian Initiation of Adults (RCIA) to blossom when it was reintroduced in 1974. He was responsible for beginning the process at Holy Family in Danville and St. John in Clinton and said, “It was a very powerful experience.”

He has always enjoyed teaching and has applied that skill to marriage preparation and counseling, as well as the RCIA. While he isn’t scheduled regularly, Father Hoffmann also assists at the Danville-area parishes and said it’s a thrill to be able to reflect on the Scriptures with people through his homilies.

He has had a lot of practice.

Following ordination, Father Hoffman served as parochial vicar at St. John in Peoria and St. Paul in Odell, where he was also on the faculty and athletic director at St. Paul High School, and chaplain at the Veterans Hospital in Dwight. He went on to teach at Alleman High School and assisted at St. Mary Church, both in Rock Island.

He ministered at St. John’s Catholic Chapel on the campus of the University of Illinois in Champaign during the Vietnam War and recalled the “division and stress” that existed among the students and staff, which included pacifists and those who were pro-war.

These days, he admits to being addicted to Sudoku and appreciates having the time “to think and to investigate and to wonder. . . . Constantly developing and discovering new purposes and new meaning to things — and greater possibilities.”

While he doesn’t preside at Mass anymore — “I’m too unsteady on my feet and I don’t want to stumble with the Blessed Sacrament in my hand” — Father Kelly continues to find ways to share Christ with as many people as he can.

Since selling his retirement home in Wisconsin and returning to central Illinois two years ago, he has worked with a group of former parishioners and friends to reflect on the Sunday readings in Advent and Lent and hopes to pick that up when Ordinary Time resumes. 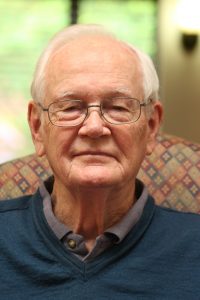 “I prepare a little lesson outline and share with them some ideas. Then we have a great discussion,” followed by coffee and coffeecake, said Father Kelly. “I really like doing that.”

The group currently meets at homes in Bartonville, where he served as pastor of St. Anthony Parish for 14 years and oversaw construction of the church.

When he arrived in Bartonville, there was a multipurpose building that hosted spaghetti dinners and other parish functions, as well as Mass. When a parish leader came to him and said they needed a church, Father Kelly demurred.

“I didn’t want to get tied up in brick and mortar. I wanted to be involved with the people,” he told The Post. But his petitioner persisted.

“They’re not mutually exclusive, Kelly,” he was told.

Father Kelly talks about the “beautiful brick” and “wonderful wood” in the church with pride and joy, adding that the design allows for a lot of natural light to brighten the worship space.

Like his classmate, Father Kelly welcomed the RCIA process and what it brought to the parish, giving over the lower part of the rectory at St. Anthony for the group to meet.

In addition, he was part of the last leg of the march from Selma to Montgomery, Alabama, in 1965 in support of racial equality and the Voting Rights Act, and heard Martin Luther King Jr. speak when they arrived.

Father Kelly’s parish work took him to St. Joseph in Rock Island and St. Paul in Odell as parochial vicar. He served as co-pastor and then pastor of St. Columba in Ottawa, and then administrator at St. Mary in Tiskilwa, before going to St. Anthony in Bartonville in 1985.