ROANOKE — As a young boy growing up in Lacon, Msgr. Charles Beebe felt a calling to the priesthood. His father, Joseph, thought that would be a difficult path and suggested he consider becoming a dentist like his uncle on the East Coast.

Though for a few years, when asked what he wanted to be, he would respond a priest or a dentist, “I had no intention of ever becoming a dentist,” said Msgr. Beebe. 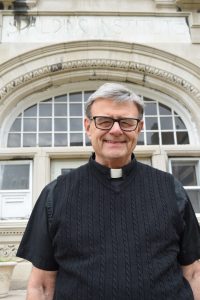 Msgr. Beebe stands on the steps of the former Spalding Institute in Peoria, where he taught and chaired the religion department early in his priestly career. (The Catholic Post/Tom Dermody)
.

Msgr. Beebe’s father died from heart failure when his only child was in ninth grade at Mid-County Junior High. In the moments before his death, he told his son: “You are going to be a priest. Pray for me.”

“His eyes sparkled, he looked ahead, and said ‘Isn’t it beautiful?’ And then he died,’” recalled Msgr. Beebe.

His father’s deathbed assurance would come true, and in a big way.

Msgr. Beebe, 71, is set to transition to senior status next month after a 46-year priestly career that included two decades in high school education, two decades of guiding the formation of the diocese’s permanent deacons, and various parish duties capped by the last 13 years as pastor of St. Joseph Parish, Roanoke, and St. John Parish, Benson.

It has been a priesthood that, in 2011, was recognized as among the Diocese of Peoria’s historic greats when Msgr. Beebe was awarded the rare title of protonotary apostolic, the highest level of monsignor.

“I was very humbled by that,” said Msgr. Beebe, recalling that among the few diocesan recipients of that honor were two priests he greatly admired — the late Msgr. George Carton and Msgr. James Campbell.

“I would never compare myself to either one,” he told The Catholic Post.

Msgr. Beebe’s priesthood will be celebrated once again with a retirement reception planned for Saturday, June 4, after the 4 p.m. Mass at St. Joseph Church in Roanoke. The two-hour reception will take place in the parish hall.

In a recent interview, Msgr. Beebe reflected on the paths his life has taken, some of which, like teaching, were planned — “I took every education course to prepare for when the opportunity arrived” — and others that could only be shaped by the hand of God.

Such reflection leads to an understanding that “we really need to trust in our life that God does have a purpose and a plan for us,” he said. “If we trust in it and we try to do his will every day, and we walk with him in faith, he’s going to lead us in the right way, even if at times we don’t understand.”

The right way for Msgr. Beebe was clear after he attended a pre-seminary retreat at St. Bede Academy at the suggestion of his boyhood pastor in Lacon, Father Charles Clifford.

“I fell in love with St. Bede immediately,” said Msgr. Beebe. Just months after his father’s death, he transferred from Mid-County to St. Bede for his sophomore year. He credits a benefactor from Lacon for making the move financially possible, as well as his mother, Marion, who took on work as a clerk with the Farm Bureau.

He would continue preparing for the priesthood at St. Bede Junior College and then Benedictine-run  Immaculate Conception College and Seminary in Conception, Missouri, from which he earned a master’s degree in theology.

Following ordination on June 6, 1970, he served as assistant at St. Bernard Parish, Peoria, and St. Joseph Parish, Pekin. In 1974, he applied for a faculty position at Spalding Institute and the Academy of Our Lady. He would eventually chair the religion department and, after obtaining a master’s in educational administration from Bradley University in Peoria, he became administrative assistant, including through the merger of the schools with Bergan High School in the late 1980s to form Peoria Notre Dame.

Msgr. Beebe later would serve in the dual roles of pastor of Sacre Coeur Parish in Creve Coeur and principal of its parish school.

While teaching full-time, Msgr. Beebe also assisted at area parishes, including a decade-long relationship with Immaculate Conception Parish in Manito, which he considers “one of the great graces of my life.”  He formed a close friendship with Deacon Dennis Woiwode, one of the pioneers in the diocese’s permanent diaconate program, and began planning many of the deacon community’s liturgies. When, in 1993, Bishop John J. Myers needed to appoint a new episcopal vicar for the permanent diaconate, Deacon Woiwode recommended Msgr. Beebe.

He would guide the program for the next 19 years.

“The majority of the deacons functioning in the Diocese of Peoria today, I formed,” said Msgr. Beebe. “I’m very proud of them all,” pointing to the “wonderful things that are happening because of the diaconate in our diocese that would not be happening without them.”

While administering the diaconate program, Msgr. Beebe also served as pastor of St. Jude Parish in Peoria from 1993 to 1999, overseeing the building of the first educational wing of what is now St. Jude School. He was named a prelate of honor with the title of monsignor in 1993.

He was pastor of St. Philomena Parish in Peoria from 1999 until his appointment to Roanoke and Benson in 2003.

“What has been wonderful about the people of Roanoke is because of the size of the parish and the involvement they have in parish life, it left me the ability to be pastor and also to work full time in the diaconate,” said Msgr. Beebe, who during the course of his priesthood also served as vicar of the Pekin Vicariate, as a secretary on the presbyteral council, and on the diocesan education commission.

Through it all, Msgr. Beebe has maintained a love of liturgy instilled in him during his Benedictine seminary days. He has long been a Benedictine oblate, and “I’ve tried to live out my oblation in education and being as devoted to liturgy as I can.”

In retirement, Msgr. Beebe will reside in a condo in north Peoria and continue daily walking and water aerobics to maintain his health. Other than continuing to make rosaries, a hobby he began while at St. Jude, he has no set plans.